The 2,197MW of orders signed in October was twice what was seen in September where less than 1.1GW was awarded.

Europe was the most active region with 1,614MW of new turbine orders agreed for projects – 73% of the global total. The region's high total returns after a quiet September when there was only 286MW of contracts.

Latin America has also improved to 196MW in October from 81MW a month earlier. This was down to one contract given to Gamesa by industrial conglomerate Votorantim Energia to supply 98 G114 2.1MW turbines to the seven-phase 196MW Venos de Sao Vicente project in Piaui, northeast Brazil.

Asia-Pacific projects were responsible for 363MW of new deals, slightly down from 370MW in September.

The emerging market in Middle East and Africa showed no new turbine deals for the second time in three months, according to the data from Windpower Intelligence, the research and data division of Windpower Monthly. 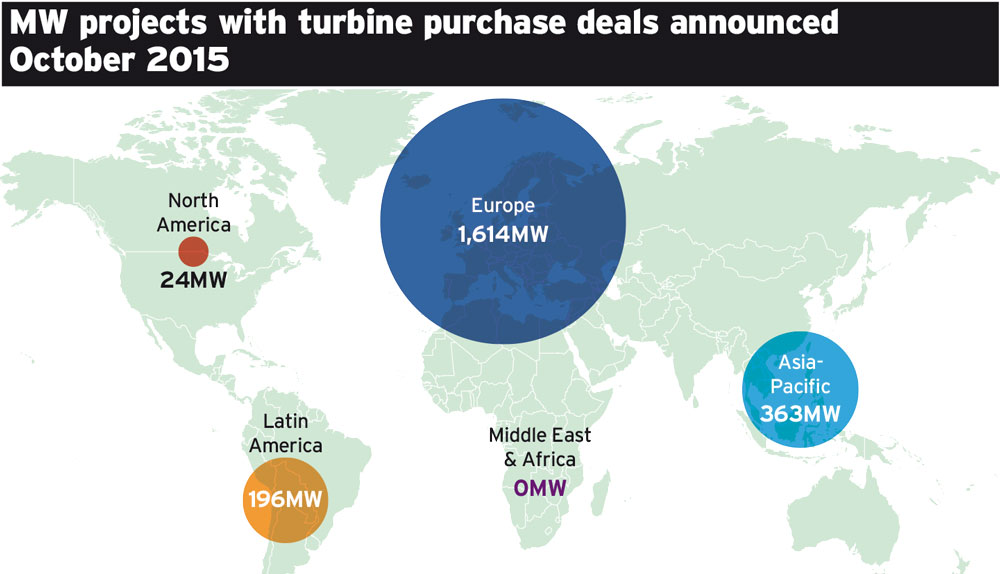 Country by country, the UK had the largest amount of new turbine deals by capacity in October, thanks to its market leading offshore wind sector. RWE Innogy reached financial close on its revived 336MW Galloper project in the North Sea. With the decision, the developer also confirmed the order for 56 Siemens 6MW turbines.

Onshore wind however, did play a role in the UK's turbine deals total. Siemens again won a contract, this time to supply SSE's 173MW Clyde project in central Scotland.

Gamesa also had a strong month, with 296MW of new deals. It was its best month for sales by MW since May, when it secured 339MW. Looking beyond its domestic market now, it won its October total for projects in Brazil and India.

The strong month for the UK has meant it is now the leading country for a 12-month period of turbine purchase deals,  leapfrogging the US with 5,655MW. 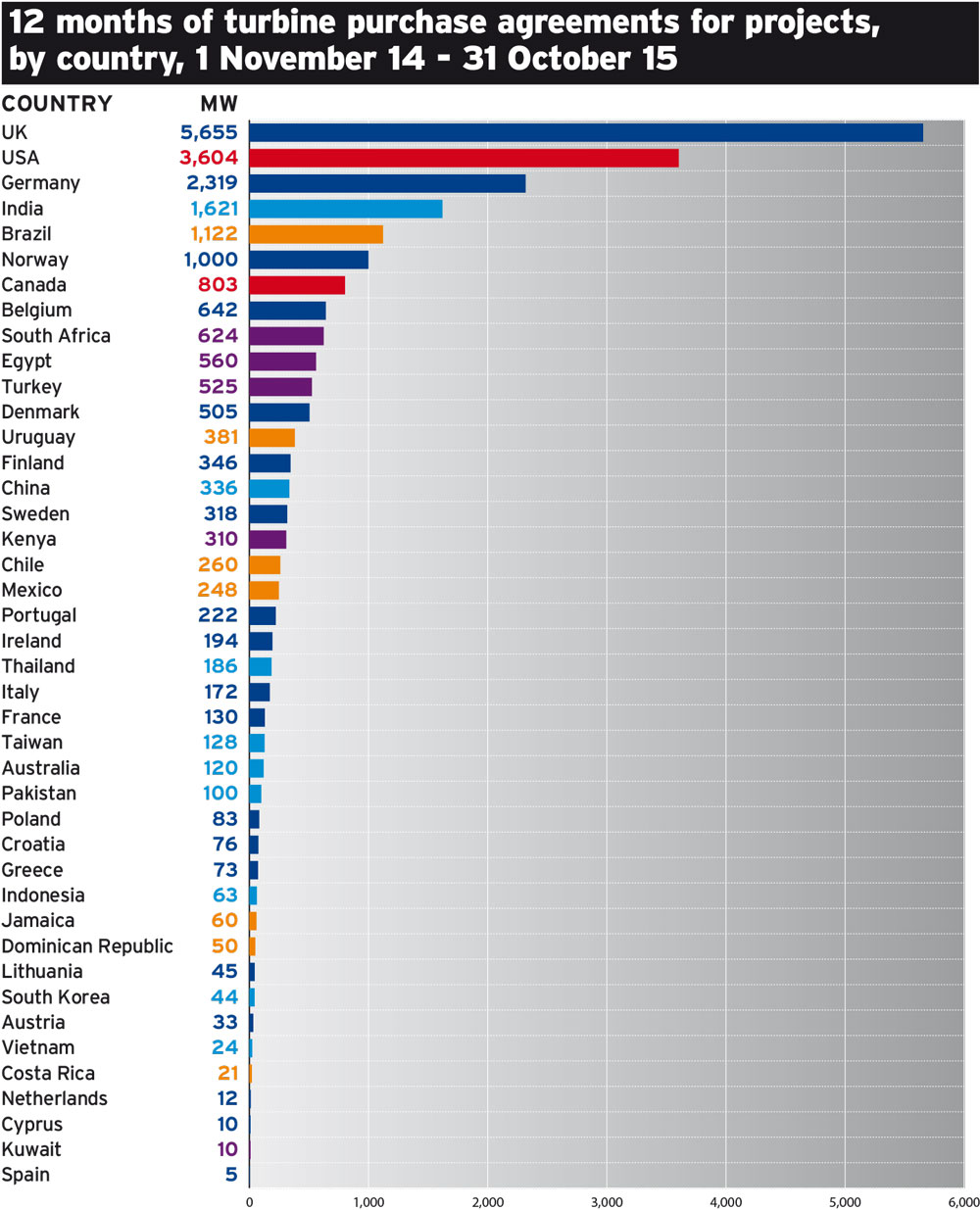 India's active market has seen it climb above Brazil in the table. And Belgium's focus on offshore wind has seen its 12-month total grow with two project contracts announced: Siemens was named preferred supplier for the 294MW Rentel offshore project and MHI-Vestas has been contracted to supply the 165MW Nobelwind site.

China is dominating the pipeline of projects as of October 2015 with over 101GW of projects in development.

Europe has the most active market, however, with five of the top ten countries in terms of pipeline being in the region. 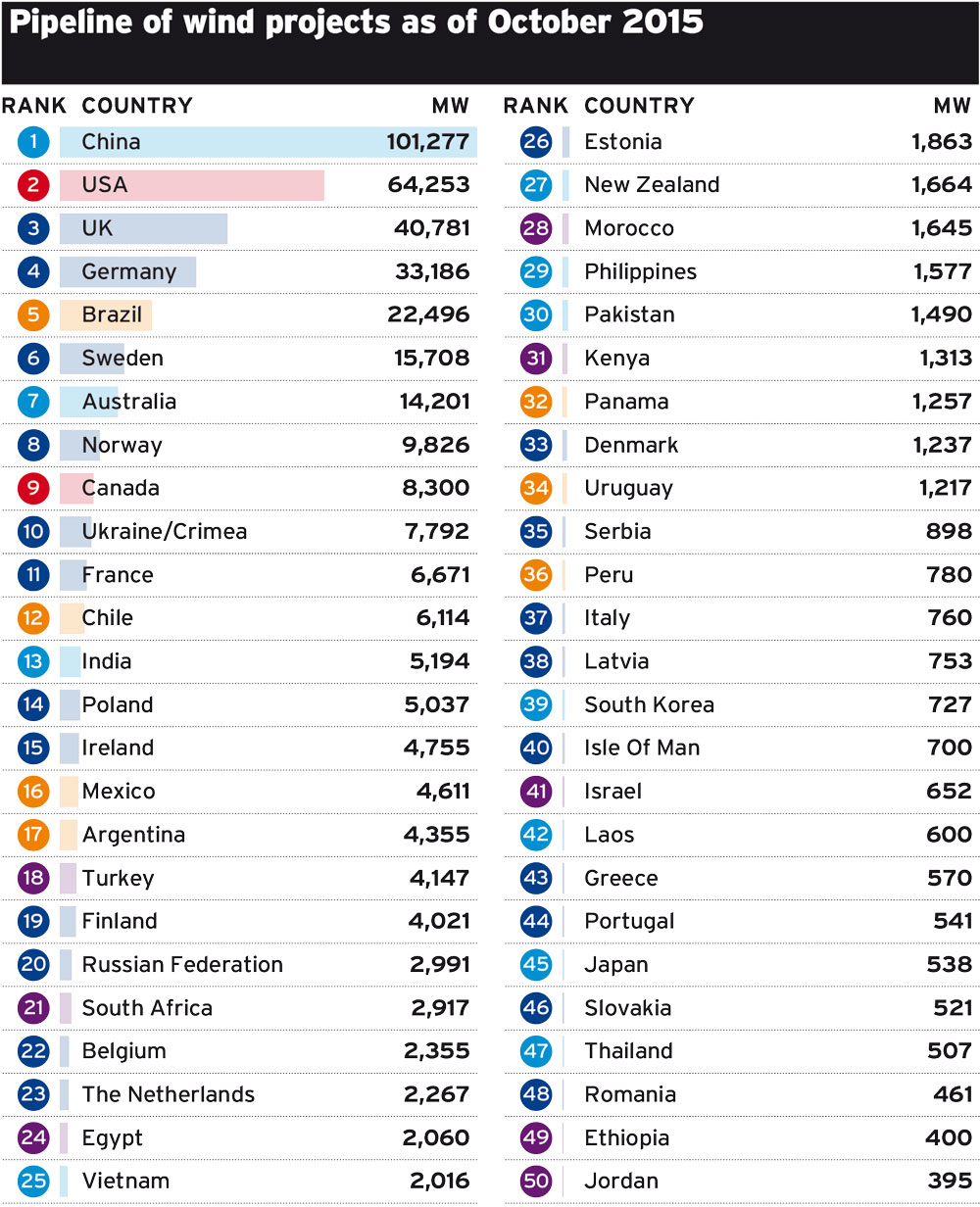