Latin America's projects undergoing activity was down by one compared with August, but remains level with its activity in 2014. North America, Europe and Asia-Pacific, have seen a drop in September's activity year-on-year.

The rebound in activity in all regions other than Latin America compared to August can be attributed to the quickening of pace as the end of year approaches and developers try to make the best of the good weather for installing projects or make a start on construction.

Seven projects noting significant activity in the Middle East and Africa gives the region a three-fold increase on August activity, and a 250% increase compared to September 2014, according to the figures by Windpower Intelligence, the research and data division of Windpower Monthly. 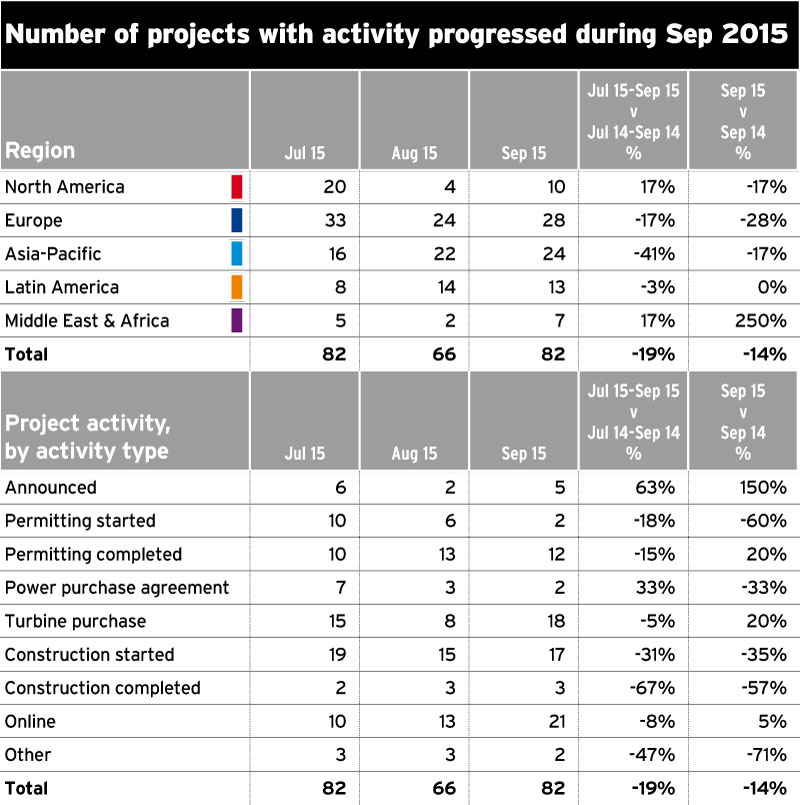 Much of the activity during September in the region took place in South Africa, which is having a strong year for wind with over 500MW capacity added this year alone.

In September, 239.5MW was placed online in that country. This includes the 138MW Gouda project in the Western Cape comprising 46 Acciona AW100 3MW turbines. Construction began in 2013.

The growth is likely to continue into next year after the country's department of energy issued a statement in May 2015, announcing the procurement of 1,121MW of renewables capacity for 2016, of which 676MW would be for wind.

South Africa also saw the start of construction at the 140MW Loeriesfontein 2 and 140MW Khobab projects being developed by the Lekela development consortium, including Mainstream Renewable Power. Both sites are located in the Northern Cape and will comprise 122 Siemens 2.3MW turbines.

Elsewhere in the region, Gamesa won a turbine order for the 10MW Al-Shaqaya project, the first development in Kuwait. In Kenya, authorities granted permission to the 90MW Mpeketoni project and the 117MW Tafila project was commissioned in Jordan.

There was an increase in the number of projects beginning construction activities in September compared to the previous month, however the total capacity of projects to get underway fell from 2.1GW to 1.3GW.

The sharp fall in capacity can be attributed to the fact that no new offshore projects – typically large projects – began in the month. This significantly affected Europe's figure, which only managed 119.6MW of new construction.

China led the way, with its ever-active onshore market starting seven new projects totalling 710MW. The largest of these was the 212MW Xihuashan project in Ningxia, north China, developed by China Resources, and it is expected online in 2017. 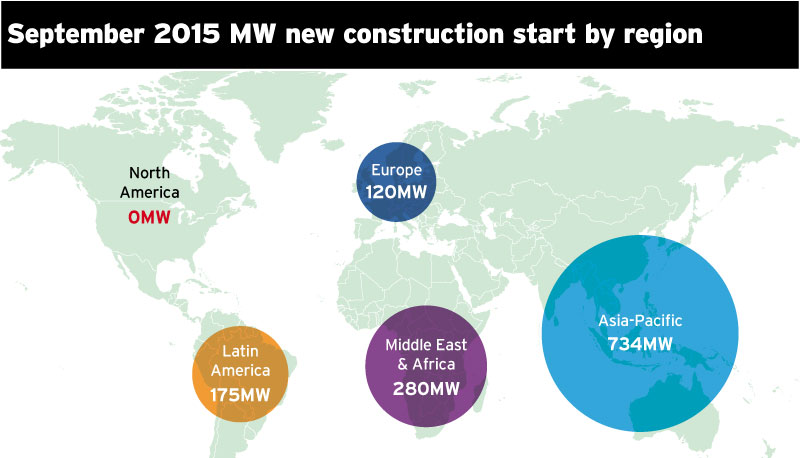 North America had no new construction starts in September, following a quiet August, when just 36MW began. As we move into the last quarter of 2015, US developers will be concentrating on finishing what they have started rather than begin anything new — as another year closes with uncertainty about the future of the Production Tax Credit renewal.

The amount of newly online projects has increased 168% to 2,228MW in September compared to a month earlier. This is just shy of the 2015-year-high of 2,294MW set in January.

New capacity is also distributed comparatively evenly across all regions as Europe adds the most with 670MW and Asia-Pacific the least with 341MW. 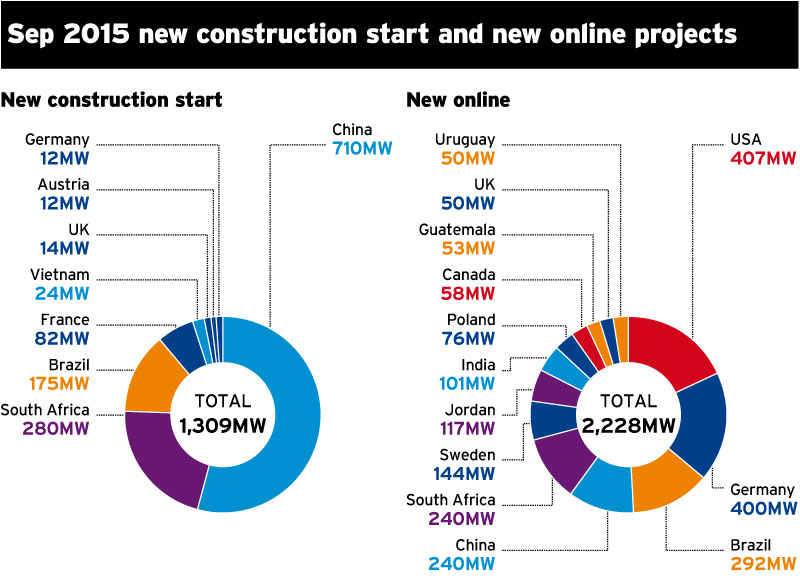 The US has the most new online capacity in the month with 407MW added thanks to two large projects in Texas. Invenergy Wind's 207MW Rattlesnake and Pattern Energy's 200MW Logan's Gap were both completed. The US has installed over 2.5GW so far this year.

Germany added a further 400MW to its wind capacity, as the rapid growth of its offshore sector continues. The 400MW Global Tech 1 offshore project, 90 kilometres off the German coast in the North Sea, uses 80 Adwen — the offshore joint venture between Areva and Gamesa — 5MW turbines. It becomes only the second German offshore project of 400MW or more to be completed.

In Jordan, Vestas also supplied its V112 3MW turbines to the 117MW Tafila project — another nation-first.