The main components of the onshore prototype of Adwen's 8MW offshore turbine are currently under production at Bremerhaven.

The turbine will be commissioned in 2016 at an onshore location to be announced by the end of the year.

Now the manufacturer still expects to achieve certification in 2017 and series production in 2018 but has "reviewed the validation programme …. introducing new steps which will enable optimising reliability of the turbine", says Adwen, the joint venture of Areva and Gamesa for offshore production.

One of these is the agreement signed today with Fraunhofer IWES to test the turbine's drivetrain at IWES's new Dynalab (Dynamic Nacelle Testing Laboratory), to be inaugurated in Bremerhaven on 20 October.

The tests, starting in December, will include mechanical testing on the integral chain of drive train components. "The process will allow individual and fully integrated subsystems’ validation as well as complete drive train operation at full power, paramount for de-risking before prototype erection in 2016," Adwen says.

DyNaLab is one of the world’s largest and the most versatile test facility for nacelle testing, according to Fraunhofer IWES, a wind and energy research organisation. The company invested around €35 million in the facility in Bremerhaven. 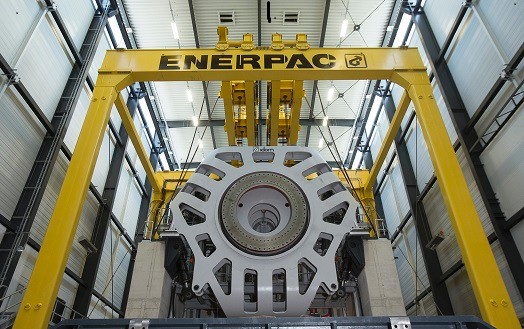