Among the main features of the new turbine are a benchmark 136-metre rotor diameter, and hub heights of up to 149 metres and the potential to exceed 160 metres.

The V136-3.45MW builds upon the 3MW modular platform, introduced in 2010 with the V112-3.0MW, which has sold more than 2,250 units, or close to 7GW. The V136-3.45MW incorporates a high-torque gearbox, newly designed 66.7-metre single-piece slender rotor blades, and an innovative large-diameter tower concept.

The 3MW platform (see below) already comprises four models, all rated at 3.3MW and each with a different rotor size for a matching IEC wind class. They include the V105-3.3MW for tip-height-constrained sites (or total installation height restraints, as in Scotland), the V112-3.3MW, V117-3.3MW, and the current low-wind V126-3.3MW flagship (IEC class IIIA). A passive free-flow nacelle rooftop cooler unit is a distinct integral part of all 3MW platform models.

"All variants, including the V136, share a largely similar nacelle layout and dimensions. But the platform allows individual specification differences, for example in gearbox torque and gear ratios," Vedel explained.

"The key overall goal is reducing levelised cost of energy (LCOE) through maximising energy production under all siting conditions across the world, building further upon comprehensively tested, reliable and proven technology."

There were some design challenges on such a long blade, which required design changes. "The V136 rotor blade is a structural shell design similar to the V126 blade, meaning that the upper and lower shells together form the main structural load-carrying elements," Vedel said. "We further use pre-fabricated finished elements from carbon fibres embedded in epoxy resin through an industrial pultrusion process. These elements are then inserted into the shell’s structure during manufacturing, a methodology that reduces the risk of production imperfections."

Vestas has been manufacturing rotor blades since 1984, and a large share of these units incorporate a coning central spar as the main load-carrying element, Vedel said. The V90, V100, V105, V112 and V117 turbine models are all fitted with spar-type blades and, starting with the V90, all incorporate carbon-fibre spar reinforcements. "Moving the carbon from an inner spar design to the outer shells enables more efficient loads transfer and thus more effective use of the expensive carbon," he said.

One of the design goals was a "reduced" aerodynamic sound power level of 105.5dB(A), as favourable turbine noise is instrumental for permitting wind turbines in populated areas. "For many years tip speeds have been creeping up gradually," said Vedel. "A safe method for achieving quick results in terms of lower sound emissions is a substantial tip speed reduction, but this would be at the expense of wind turbine yield and LCOE performance.

"Because this is unacceptable, with the V136 we focused instead on retaining a state-of-the-art tip speed, and combined it with an innovative blade design. This has resulted in an exciting blade incorporating new-generation Vestas in-house developed high-performance aerofoils with a high-lift/low-drag ratio, Vortex generators and (comb-shaped) serrated trailing edge (STEs) offering improved noise performance."

The Vestas design teams had to address multiple additional challenges, including having to deal with the complex onshore transport logistics for the huge 66.7-metre blade, Vedel said. Vestas has a team of in-house experts specialised in developing dedicated equipment, and it already has experience of moving the 61.7-metre long blades for the V126 by road. For complex sites and difficult site-manoeuvring a third-party-designed self-propelled blade transporter will be employed.

Another challenge linked to the fitting of a larger rotor and a slightly increased power rating set against the V126 is increased gearbox input torque. Vestas uses a new "high-torque" gearbox variant of existing V105-V126 gearboxes, with outer dimensions that still fit inside the modular 3MW nacelle.

Remarkably, the blade root diameter has remained unchanged from the initial V112 right up to this latest V136-3.45MW, but pitch-bearing design and load-bearing capacity have been adapted to match load increments.

Turbines with super-size rotors require large hub heights, especially when sited at forested inland sites. Vedel was enthusiastic about the company’s in-house-developed large-diameter steel tower (LDST), which has remained largely unnoticed despite being tested since 2005 with a V90-3.0MW turbine. A second LDST with a V112-3.0MW and 140-metre hub height has been operating since 2012, and LDSTs combined with a V126 and 137-metre hub height since 2014.

Prior to the start of the new tower project, a team of Vestas tower specialists evaluated several state-of-the-art high tower solutions, considering the full value chain and aiming to find a cost-effective alternative to tubular steel towers.

The solution tower would have to be suitable for large hub heights but constrained to a maximum bottom diameter in the 4.2 - 4.3-metre range to meet road transportation requirements.

One approach is a "soft" tubular steel tower with advanced turbine control, but the main disadvantages are the 50- to 70-milimetre thick steel wall required, which results in very heavy and expensive solutions. The team also evaluated lattice steel, full concrete and concrete-steel hybrid designs.

"The outcomes were compared and turned into LDST design drivers especially focused on finding a cost-effective wide-base tower solution offering reduced mass and cost, and additional road-transportation savings, for optimising LCOE performance. LDST has been positively received in the market, and what is really exciting visually is that they are hardly distinguishable from ‘normal’ tubular steel towers," said Vedel.

"We have so far installed more than 80 LDSTs in Finland, and the first units in Germany. The combination of the LDST concept towers with V136 turbines for hub heights of 132 and 149 metres to start with offers huge new opportunities for cost-effective wind-power generation in many countries, including those with a less favourable wind climate", he concluded.

The first installation of a V136-3.45 is expected for next year, series production start in 2017 and an IEC type certificate late that same year. 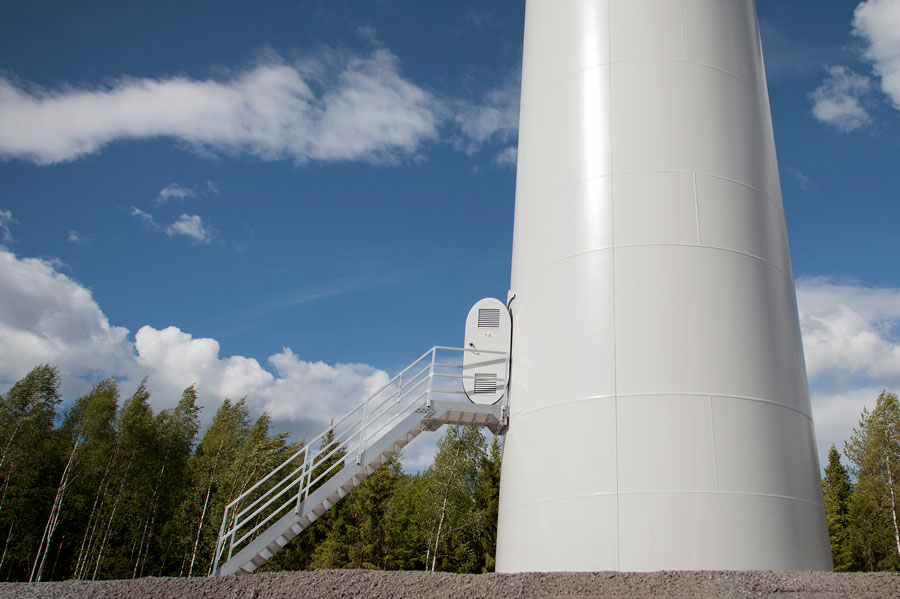 Another significant feature is that the amount of steel used can be cut substantially through much reduced wall thicknesses. For the LDST towers, it can be in the 25-40mm range, compared with the 50-70mm thick sheets used for a regular tubular steel tower. Each LDST tower typically comprises two bottom LDST sections, each 28-33 metres long, supplemented by three middle and upper "standard" tubular steel sections.

A really clever part of the patented LDST concept is that the wide-base bottom sections are first manufactured in a single tapering full-circle element, and than sliced into three 120-degree longitudinal segments. But before actually slicing the sections by precision cutting, three vertical, closely interspaced pairs of steel flanges are welded inside. Each pair is positioned on either side of an area where a longitudinal cut will be made. Each of the six flanges finally incorporates regularly spaced predrilled holes for the later on-site bolting assembly process.

A main benefit of the LDST segmentation solution is that individual segments can be easily transported by rather inexpensive flatbed trucks to wind-farm construction sites. The middle and upper (full-circle) sections are similar to standard tubular steel towers transported by dedicated tower transport equipment. 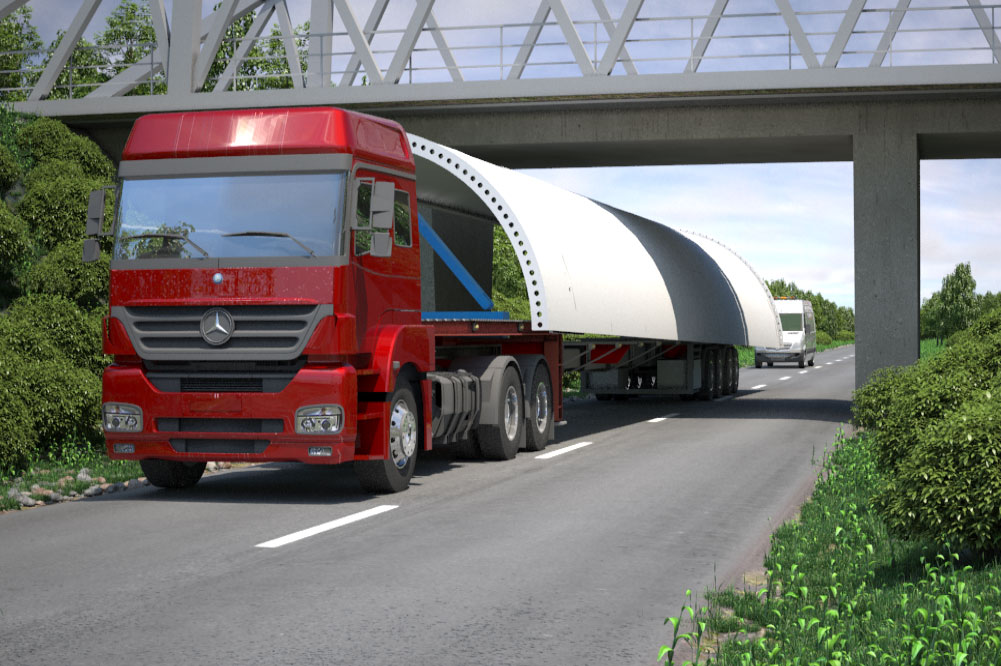 Vestas developed a rather uncomplicated tool comprising two roller beds, which have to be placed apart and aligned properly before the on-site LDST re-assembly process starts. The first LDST segment is lifted in by an assembly crane and lowered on to the roller beds. Next the second segment is lifted in and connected to the first segment by bolt joints.

The same process is repeated for the third and final segment, and to finish the assembly the tower internals are mounted in the LDST and other sections.

The V112-3.0MW turbine introduced in 2010 was the informal successor of the sensational lightweight V90-3.0MW (2003) onshore/offshore model, which unfortunately suffered serious and difficult-to-solve gearbox issues for a prolonged period. Following comprehensive test runs at Vestas’ test centre in Denmark, the issue was resolved.

The two designs radically differ. The V90-3.0MW, technologically, has a compact nacelle incorporating a flanged gearbox with a semi-integrated single rotor bearing, and new-generation slender-rotor blades. More than 3,000 turbines have been installed in both onshore and offshore locations.

The V112-3.0MW marked a return to a conventional non-integrated drivetrain comprising a three-point gearbox support. This has featured in all later platform models, and is also applied by many leading competitors. Less common was the choice for a permanent magnet generator with full power converter in the V112-3.0MW instead of a doubly fed induction generator applied in the V90, V80, and V52 models.

Earlier this year Vestas introduced an option called "power mode", which allows rated 3.3MW output level to be boosted to 3.45MW. This overrating option is valid for operational conditions whereby actual turbine loads remain below certified type design loads. A typical example suitable for such operating conditions are sites with reduced turbulence intensity, and all turbines running with the power mode on comply with design climate IEC class S.

The V136-3.45MW uses an induction generator (again with full converter) that was first used in the 3.3MW model upgrade. This was introduced in 2013, in response to cost developments on permanent magnets.

A recent innovation introduced in all models is an advanced de-icing system, which blows hot air inside the blade. It covers a large de-icing area from the blade tip to one third of the trailing-edge full chord and up to two third of the leading edge.