Europe provided the lion's share of deals for the second month in a row but its total almost halved compared to the previous month as the industry enters a quieter period over the summer months.

Over 1.45GW of deals took place in Europe during July, down from 2.79GW in June, according to data from Windpower Intelligence, the research and data division of Windpower Monthly.

Almost all of this turbine capacity was for just one offshore project, with Siemens named preferred supplier for the 1.2GW Hornsea 1 site in the UK. The Dong Energy project is set to deliver power from 171 Siemens 7MW turbines when it completes in 2020.

Ireland followed the UK for top country in Europe to win turbine deals. By comparison, the European country with the next largest amount of turbine deals was Ireland, where Siemens  picked up two contracts totalling just 99MW, both onshore. 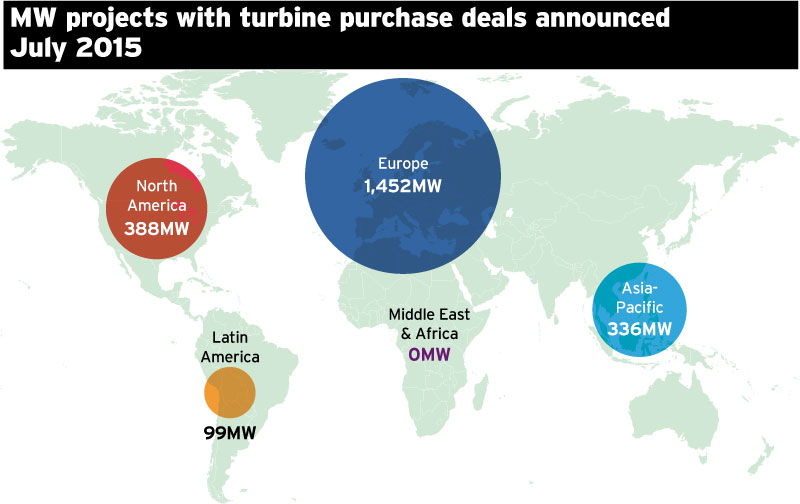 The Asia-Pacific region had a stronger month in July. It saw 336MW of turbine deals compared to 98MW the previous month.

Danish firm Vestas won a 26MW deal in South Korea. It will be the first time Vestas has supplied its V100-2MW turbine to a South Korean project.

India had 250MW of turbine purchase deals in July, the second highest total globally, for three projects. Spanish manufacturer Gamesa was awarded the contracts for all of these projects from independent power producer Orange, who ordered 125 of Gamesa's G97-2MW turbine for the sites in central and southeast India.

Gamesa also won a 60MW deal in Thailand to supply three projects with its G114-2MW turbine.

It was a strong month for Gamesa. As well as the orders in Asia-Pacific, it also received a 208MW order to supply the Amazon Wind Farm US East project, in North Carolina, US. The project is being developed by another Spanish firm, Iberdrola, and the power will be bought by Amazon Web Services, the cloud-computing arm of Amazon.com. In total, Gamesa won 536MW in turbine deals last month.

There is a rare omission in the data of MHI-Vestas in July. The offshore joint-venture had experienced a strong first half of the year with over 2.5GW of deals or preferred supplier status announcements.

GE was the only non-European-based manufacturer to win a turbine purchase deal in July. It was awarded a 180MW deal by Pattern Development to supply the Meikkle project in Canada.

Well over half the capacity of turbine purchase agreements over the last 12 months have been located in Europe, thanks to its ever-growing offshore sector. The UK leads the way, thanks mostly to the large round three offshore projects selecting ther turbines recently.

Brazil has slipped down the rankings behind Germany and India as wind capacity in its energy auctions decreases, meaning fewer projects needing to buy turbines. 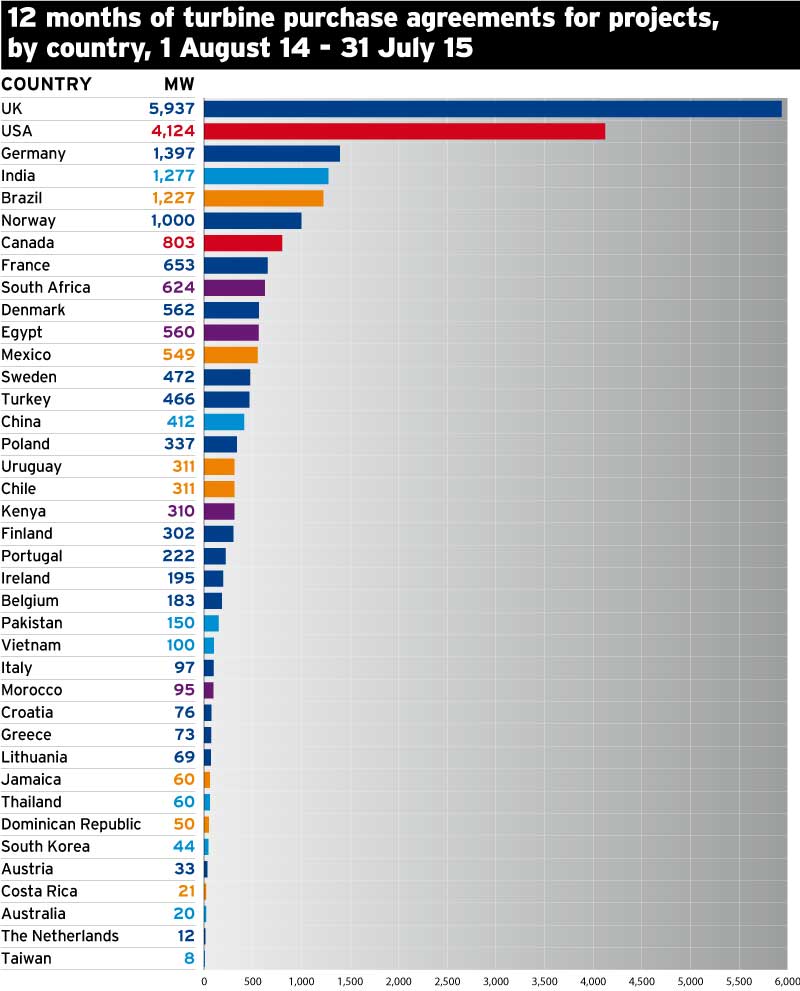