The Enercon technology in question allows a wind turbine to gradually reduce power output when wind speeds are too high. Enercon's original patent was filed in 1996 and is set to run out in August 2016.

The projects using the system include London Array and Dong Energy's Gunfleet Sand, among others, Enercon claimed. Dong and turbine installation specialist A2Sea were included in the lawsuit.

The ruling, which was published by the High Court last week, found Enercon's case was invalid. It said there was "prior art" that predated the patent.

Siemens used two items of prior art, or known technology, in its defence — a Toshiba application filed in 1981, and an article on wind power output written in 1982. Siemens continues to deny it has infringed Enercon's patent. 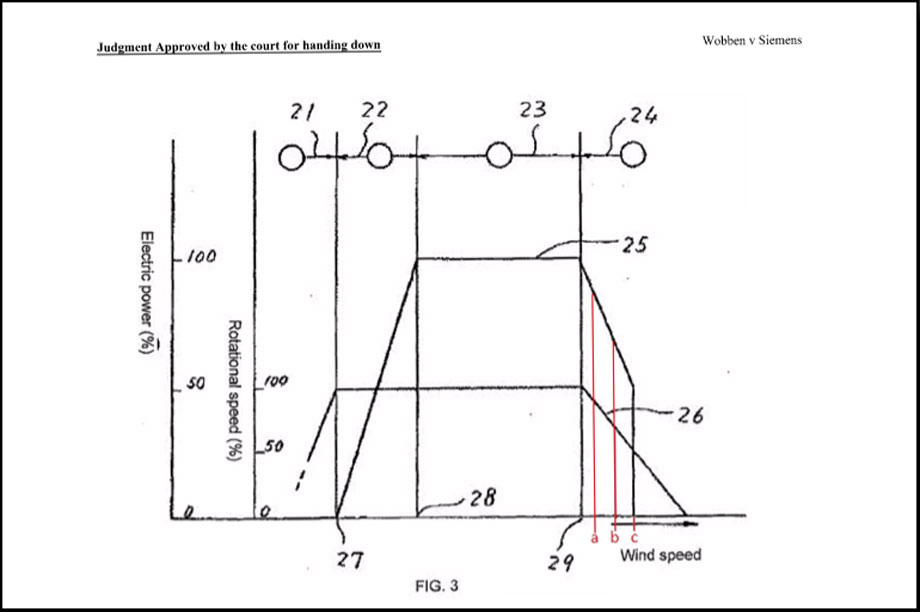 Pic: The Tobshiba patent, which Siemens used in its defence

In 1995, when Enercon filed the storm control patent, turbines had to completely shut down in winds that were too high. The 1981 Toshiba application showed how to steadily decrease rotor speed and output in these conditions.

Enercon argued the Toshiba patent was only concerned with changes in rotor speed and power output during shutdown. There was no mention of the turbine speed increasing again once the wind speed had fallen, Enercon said.

In response Siemens cited a 1982 paper "Probabilities of sudden drop in power from a wind turbine cluster" written by former Garrad Hassan employee EA Bossanyi. The article models the impact on the grid from fluctuations in power from wind projects.

Bossanyi's paper referred to: "The use of a windmill whose output can be reduced gradually to zero as the wind speed increases", and which "reduces severe ramping of the cluster output as well as being advantageous to the individual windmill".

Although it was written before the introduction of variable speed turbines, Siemens said it would be obvious to an engineer to apply Bossanyi's research and also slow down the rotor speed during excessive winds.

The judge agreed with Siemens on this point and ruled against Enercon.

Speaking about the decision, wind IP specialist Totaro Associates founder Philip Totaro said: "The UK court seems to have taken an interesting interpretation of the Bossanyi paper which dealt with VSCF (Variable-speed constant-frequent) technology as it would be applied to variable-speed, variable-frequency machines.

"Enercon might have room to counter that argument in any appeal they may be considering."

Last year, Enercon won a separate case against Gamesa in Spain over the same technology.

In February, a Spanish court found Gamesa had infringed the Enercon patent on turbines including its 4.5MW and 2MW machines.

In September 2014, after a three-year patent battle, the Barcelona commercial court dismissed appeals by Gamesa against the ruling. There are expected to be further appeals although the courts have ruled the Toshiba paper as inadmissible

The appeal is ongoing and may not be resolved until the end of the year.

Enercon has legal proceedings against Siemens that are running in parallel in Germany. They are in connection with the German part of the same European patent. Siemens said it had won a court case in Germany, but Enercon had appealed.

Vestas has also filed its opposition with the European Patent Office in an attempt to limit the Enercon patent.

Wobben Properties filed the Patent EPO 847 496 with the European Patent Office (EPO) on 29 August 1996. The patent was granted in 2000 and the patent specification was published by the EPO on 9 August 2000.

In the following three months, the patent was validated in Spain, Denmark, the UK, Greece, Ireland, Portugal and Germany.