Attendance as of first thing Thursday morning was nearly 6,500, according to preliminary data from the American Wind Energy Association, way down from an estimated 10,000 registrants over four days in 2014. Exhibitors numbered about 400, down from last year’s 440.

As the final day of the conference gets under way, exhibitors said that although traffic was slower on the floor, the quality of contacts was high. Deals and connections were made.

Bent Loeje Nielsen, senior technical project director with Windar Photonics, which provides proactive instrumentation, said: "It has been a good conference to come out and show our product. We have had interest. We have made maybe 50 sales – it is a lot of business considering how new we are." The company is about two years old.

Ken Cohn, a senior engineer with Vaisala, the meteorological measurement company, said that it was good to have a presence at the event. "Many of our customers are under one roof – it is what is good about any conference."

A long-time industry participant, Cohn also commented on the production tax credit (PTC), which may or may not be extended, and a likely market slump in 2017. "I am worried about a down market and PTC uncertainty," he said. "But the overseas market is healthy for us."

Jesse Dilk, marketing manager of Kluber Lubrication, said; "It's been a good conference in terms of the quality of the leads." But he added: "It would have been nice to see some more O&M people here." Kluber sells specialty lubricants to both O&M companies and original equipment manufacturers (OEMs).

On another stand was Jim Therriualt , vice president of materials handling for Sprague, a member of the Maine Ocean and Wind Initiative. "It's good. We get to see everyone we want to see in one place," he said. "The conference has consolidated a little more but the quality of people is better."

On the exhibition floor, several companies were offering virtual reality, including GE and its Digital Wind Farm.

Lifting a 70-100 ton nacelle with a 350-foot boom on a windy project construction site with uneven ground is highly skilled, especially as the cranes are amongst the largest 5-10% of all US cranes. 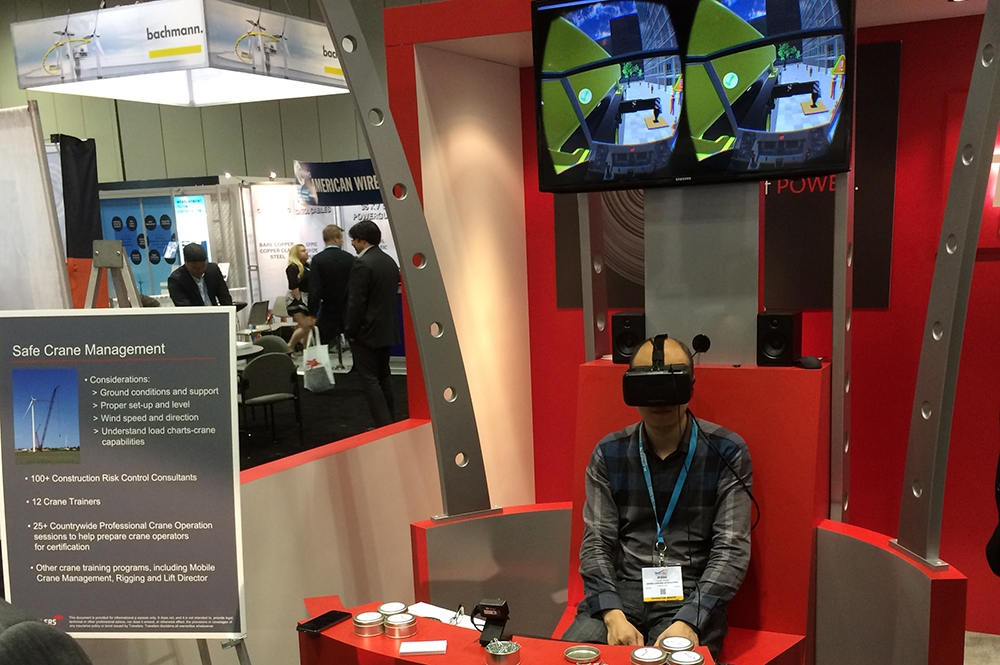 Attendees were invited to take on the role of crane operator, using a virtual reality headset. They had to decide whether it was safe to lift three different loads in varying wind conditions, and with different weights. If you made a wrong decision, you could ‘black out’ the crane – tipping it over. And as some attendees discovered, blacking out was a dizzying experience, and they could have totalled the most expensive piece of construction equipment on the site, endangered workers and disrupted the schedule.

At the Vestas stand, Christian Venderby, group senior vice president and head of service, gave an overview of the company's growing service business. "There's a general interest in extending [turbine] life by another five or ten years." This is on top of a 20-year design life, he said.

Vestas expects its service business — which has been a separate unit for almost a year — to grow by 30% over the next three to five years, he said. In 2014, the Vestas service business grew 7%, recording €1 billion in revenue. It also has a €7.5 billion backlog of long-term service agreements.

Vestas services more than 47GW of turbines with long-term agreements, including other manufacturers' turbines. In fact, it is the largest provider of servicing in the industry. As many as 85% of Vestas turbines out of warranty are still serviced by Vestas, which also intends to service more non-Vestas turbines than it does now, Venderby added.

Is there a tipping point after which a turbine is no longer worth servicing? "No," he said. "We constantly monitor them. We use predictive failure analysis. We do a lot to control the event and control the cost.... we work hard to reduce the cost per event." Indeed some Vestas turbines installed in the 1980s are still operating, for example in the Altamont Pass in California.