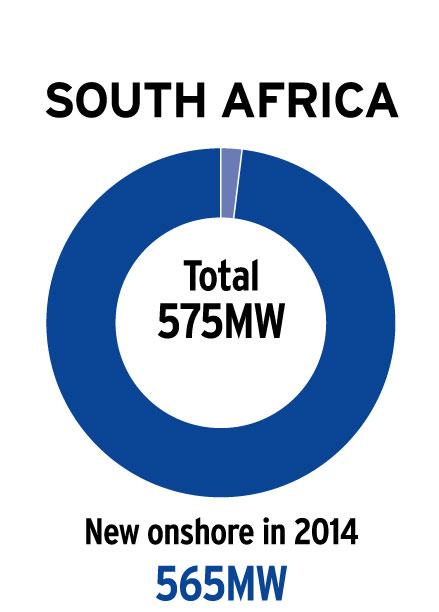 In South Africa, SAWEA tallies an additional 625MW under construction, of which 505MW is scheduled for connection this year. All capacity building comes from the 2011 first round (651MW) and 2012 second round (787MW) calls to tender for wind development, under the government's 2010 renewable energy independent power producers programme (REIPPP).

First online in 2015 was the 62MW Grassridge project, developed by French utility EDF Energies Nouvelles and commissioned in February. Next will probably be the 80MW Kouga development.

Both those projects are in the wind-swept Eastern Cape province. They follow numerous landmark commissionings last year in the same location, including Mainstream Renewable Power's 138MW Jeffreys Bay development and the 138.6MW Cookhouse development by Suzlon, which also supplied the turbines.

What puts South Africa in a league of its own in sub-Saharan Africa is the government's careful planning through the REIPPP, "which attracts developers to stay in the country long-term", says Silvia Macri of analysts IHS Consulting.

Over the past year there has been a marked slowdown in processing the tenders as Eskom's financial woes delays power line building and PPA signing. In November 2013, 780MW of new wind capacity was allocated in the third round of bidding. Yet financial closure has only been achieved for half of that, and that took until February 2015. The projects are Khobab (140MW), Noupoort (80MW) and Loeriesfontein (140MW), all of which are being developed by Ireland's Mainstream in Northern Cape province. Financial closure is the final step before a PPA can be sealed with Eskom and was completed in half the time in previous rounds.

The Department of Energy also delayed the fourth and final REIPPP bidding round for the remaining 590MW scheduled for wind. Initially scheduled for November 2014, the announcement of preferred bidders is now not expected until May. But with so much wind power suddenly moving, "delays are expected, without affecting market attraction", says Macri.

However, major challenges lie ahead, such as creating a system for granting PPAs beyond round four. Also, developers will have to find ways to pool resources to build new transmission lines themselves. 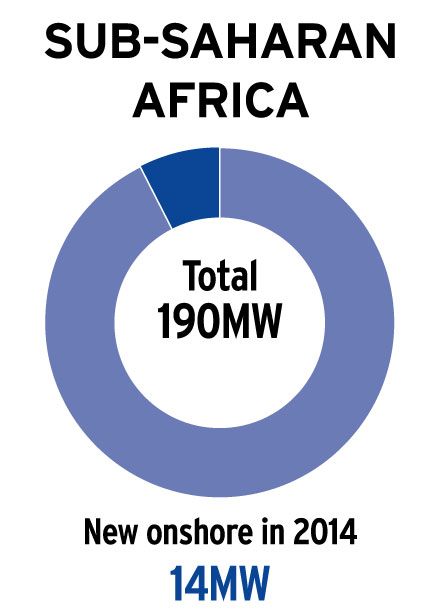 Kenya, one of the few African countries with a price support mechanism for wind, was the region's second market last year after Spain's utility Iberdrola connected the 13.6MW Ngong II project, extending the only previously existing wind plant, the 5MW Ngong I, owned by local utility KenGen.

Mixed signals surround other Kenyan projects, delayed by administrative inertia and lack of finance. Egyptian-Spanish turbine manufacturer El Sewedy-MTOI pulled out of a 40MW project in Meru due to lack of any development progress in over a year. Similarly, no progress has been reported at a 100MW project owned by KenGen, also in Meru.

The region's only other significant market, Ethiopia, installed nothing in 2014, despite doubling wind capacity in 2013 to reach 171MW. A further 153MW, however, is under construction at Adama II with support from Chinese firms HydroChina and CGCOC.

Developers, especially Chinese companies keen to finance their own entry into new markets, will be ready to pounce on any wind opportunities across Africa, says Macri. But apart from other difficulties, competition from increasingly cheaper solar PV is growing - even in South Africa - as it is best suited to the micro-grid and off-grid applications that are often the norm across the continent.