Adjustment of onshore wind benchmark tariff accelerated installations, though not without concerns

The mandatory renewable quota scheme, likely to be released this year, will give a big push to development of onshore and offshore wind

China's main wind target for 2015 of a total 100GW of grid-connected capacity has, by some calculations, been met already. The China Wind Energy Association (CWEA) recorded total installations of 114.76GW by the end of 2014, with 96.37GW grid connected, according to the National Energy Administration (NEA). This month, the grid-connected figure calculated by Windpower Monthly's data division, Windpower Intelligence, is more than 101GW.

And if 2014 was a record year for growth in wind installation - over 21GW was constructed - this year promises to be even better. China's developers are chasing a 31 December deadline to complete projects before a reduced (by CNY 0.02/kWh or $0.003/kWh) feed-in tariff (FIT) kicks in. The rate of building and connecting is expected to easily outstrip last year's.

There has been less progress in the offshore sector, with the FIT of CNY 0.82/kWh introduced last June for projects commissioned before 2017 widely considered to be inadequate. Although 44 projects totalling 10.53GW are listed in the government's offshore plan, the national target of 5GW of offshore capacity by the end of this year is well out of reach.

China's economy is still growing, but no longer at the rate of the previous few years. Electricity generation, for example, climbed by 3.8% in 2014, the slowest rate of growth for ten years. The impact of this slowdown on the energy sector is mixed. There is less momentum for capacity expansion, but more opportunities for restructuring. Government statistics show that last year wind investments, totalling CNY 99.3 billion ($16.1 billion), outpaced those in thermal power (CNY 95.2 billion) for the first time.

China has set goals to raise the share of electricity generated by non-fossil fuel sources to 12% by 2015, 15% by 2020 and 20% by 2030. According to NEA it stood at 11.1% at the end of last year. The government looks serious about honouring this pledge, and wind power is considered a vital component in achieving it. Official pronouncements have shifted from promoting "orderly" to "vigorous" developments.

China's first renewable energy law became effective in 2006. Last year it passed a revised environment protection law and issued a host of regulations relating to clean power generation and prevention of air pollution. A mandatory renewable quota scheme is expected to come out this year, and a nationwide carbon emission trading market will be created accordingly.

In 2014 the average generating hours of wind facilities dropped by 181 hours to 1,893 hours. This was because of weak winds, which, at 70 metres above the ground, were 8-12% slower on average than in previous years. Partly due to this, the average curtailment rate fell to 8% in 2014, the lowest in the past three years, although this figure might not reflect the real intensity of the problem, an industry observer said.

In 2015 and beyond, China intends to give priority to developing wind power in eastern areas, where load demands are relatively high, build more ultra-high-voltage lines to transmit electricity from western to eastern regions, and explore reforms on the demand side so as to make better use of the variable wind power, said Shi Lishan, deputy director of the NEA's new and renewable energies division, in February. 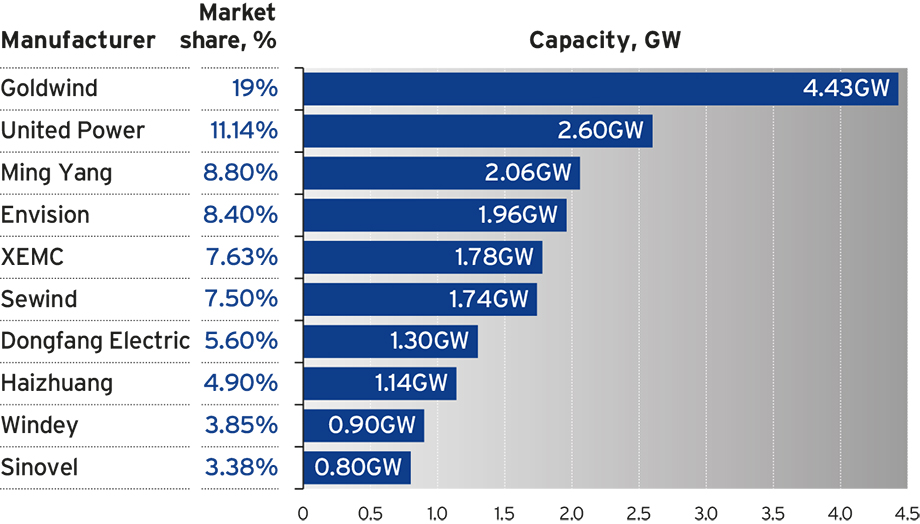