Republican-led Congress is unlikely to extend PTC in 2015, which could lead to a severe crash in the market in 2017, once the 2016 deadline for project completion has passed

Whether a wind-friendly tax incentive can be inserted into Congress's broad tax reform if a major tax code rewrite proceeds. In Q3, the EPA will lay out its plan to cut carbon emissions from existing power plants

The US is expecting a healthy volume of wind installation in 2015, around 50% up on 2014 as developers scramble to use December's extension of the wind production tax credit (PTC). But the credit may die, leading to a dramatic drop-off in projects going online in 2017, following the Internal Revenue Service's extension by a year of the date by which projects must come online in order to qualify for the PTC - now set at December 2016.

According to the American Wind Energy Association, as of December last year, developers reported more than 12.7GW under construction. Make Consulting logged an estimated 6GW in conditional equipment orders at the year's end, although only a small proportion of these were firm orders.

Wind's volume of power purchase agreements (PPAs) is expected to remain strong this year, and there will be increased competition for tax equity, says Amy Grace of Bloomberg New Energy Finance (BNEF). Solar developers are vying to use the 30% investment tax credit before it is slashed to 10% in 2017.

More new yieldcos - publicly traded companies formed to own operating assets with a highly predictable cash flow - are expected, leading to increased competition for strong tax-advantaged wind projects with good PPAs and reputable equipment. "They will all be chasing the same projects," said one analyst.

This summer, the Environmental Protection Agency (EPA) will issue its plan for tougher emissions standards for existing power plants, boosting low-carbon investment from later this decade. That will follow the Department of Energy's Wind Vision report published in March, showing how wind could supply 10% of US electricity by 2020, 20% by 2030, and 35% by 2050.

Large projects under construction include Chermac Energy's 240MW Happy Hereford in Texas, which has a PPA with Google, and EDF Renewable Energy's 175MW Pilot Hill in Illinois, with a PPA for a Microsoft data centre. By mid-year, Warren Buffet's Mid-American Energy will complete the final 495MW portion of its 1.1GW Wind VIII development in Iowa.

Deepwater Wind's 30MW Block Island offshore project is to begin installation work this summer and start operating in 2016. It is set to become the US's first utility-connected offshore project and will use Alstom's 6MW Haliade turbine.

Nonetheless, the nascent offshore sector has continued to struggle, highlighted by the 468MW Cape Wind project, which has faced exceptionally well-funded opposition, missing a 31 December deadline for completing financing and starting construction. National Grid and Northeast Utilities' NStar cancelled PPAs for 77.5% of its output as a result. The project now looks dead in the water.

Last year saw 4.9GW of new developments go online, including about 1.5GW of merchant projects (which sell power to the open market) in Texas, the state still the centre of wind development in America. Other hotspots, although not of merchant plants, were Iowa, Oklahoma, Michigan and Nebraska. A notable dynamic was the doubling of renewables yieldcos. The first major third-party purchase in the US by a renewables yieldco, saw NRG Yield buy 947MW of the 1.8GW Alta Wind project in California from Terra-Gen Power in August. 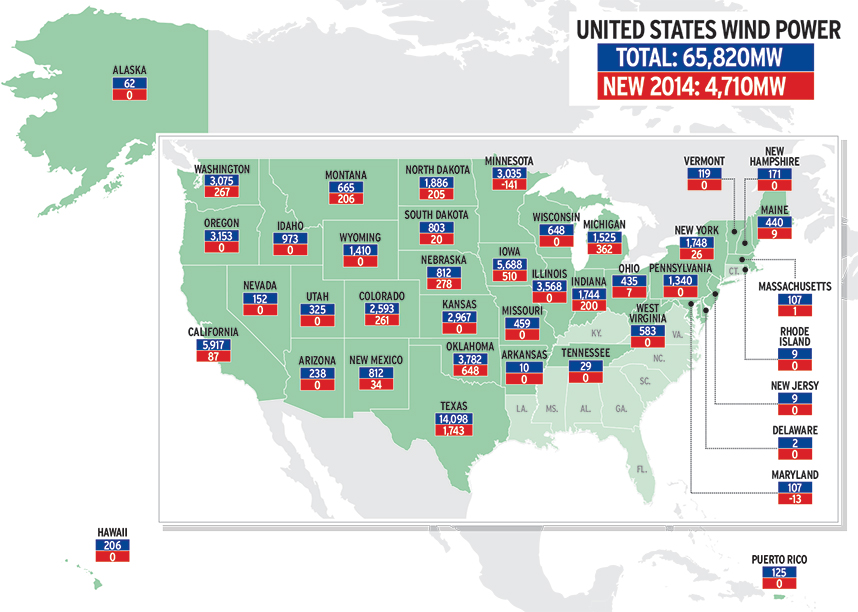