Wind power had a good first quarter in 2015, with some of Germany's large offshore projects reaching completion and healthy advances showing in South Africa. Growth in Latin America is running at over 10%, which bodes well for the rest of the year. In North America, Texas and Illinois lead capacity growth in the US, while Canada continues to bring new projects online at a steady pace.

Windpower Monthly's final tally for worldwide (and grid-connected) wind capacity at the end of 2014 is 350.8GW. There were late surges in the US and India, and the total for China was revised. The total capacity installed last year was 48GW - a 37% increase on the 35GW installed in 2013, and higher than some early forecasts for the year. The compound annual growth rate for the years 2010-2014 was 12.5%, so the industry is still growing rapidly.

Since the start of the year, around 10GW has been added worldwide, bringing the total at early March to 361GW. The electricity-generating capability of 361GW of wind is around 788TWh per annum. That is more than the annual electricity requirements of the whole of the African continent, and almost enough to supply the needs of Russia.

The strongest-performing countries in Europe in the first quarter of 2015 - in terms of added megawatts - were Germany with over 1GW, and France, with 200MW.

Elsewhere, there were signs of the long-awaited takeoff in South Africa, while China, India and Australia performed strongly. China led the way in megawatt terms, adding more than 4GW. The anticipated surge in South America showed signs of developing, particularly in Brazil, which added 780MW. Latin American capacity expanded by 12% during the quarter - the highest of any region. The accelerating growth in these regions was highlighted by Vestas in its annual report. "Emerging markets in Latin America and Africa continue to show growth potential, with deliveries of 767MW in Latin America and 165MW in Africa," it noted.

Performance in the US is picking up, having accelerated towards the end of 2014. The American Wind Energy Association (AWEA) reports that 12.7GW was under construction at the end of the year.

Although the price of oil is still low, it does not appear to be adversely affecting wind energy developments. This may be linked to an awareness that wind energy is becoming more competitive. It faces stiff competition from solar photovoltaics, but the electricity price from solar PV is still higher than that of wind.

There have been several recent developments in offshore wind prices, with electricity costs falling - to be reported next month - which may improve its prospects. Offshore wind faces competition from nuclear, but with the proposal for a new nuclear power station in the UK mired in controversy - and not yet reflected in a final contract - that strengthens the position of offshore wind. To gauge future progress, it is worth loking at the pipeline of the market leaders - the UK and Germany.

The UK has around 14GW awaiting consent, consented, or under construction and there is another 25GW in the pipeline.

However, uncertainty over the new electricity market reforms in the UK, together with possible budgetary constraints, may inhibit progress. Comparable near-term activity in Germany totals about 2GW (awaiting consent), and there is another 7GW at an earlier stage of development.

In the US, at the beginning of March, it was announced that Deepwater Wind had fully financed the Block Island Wind Farm, reaching financial close. The 30MW project is already under construction and will be America's first offshore wind farm. The company is planning three other utility-scale wind farms on the East Coast, plus a 30MW project on the West Coast using floating wind turbines. 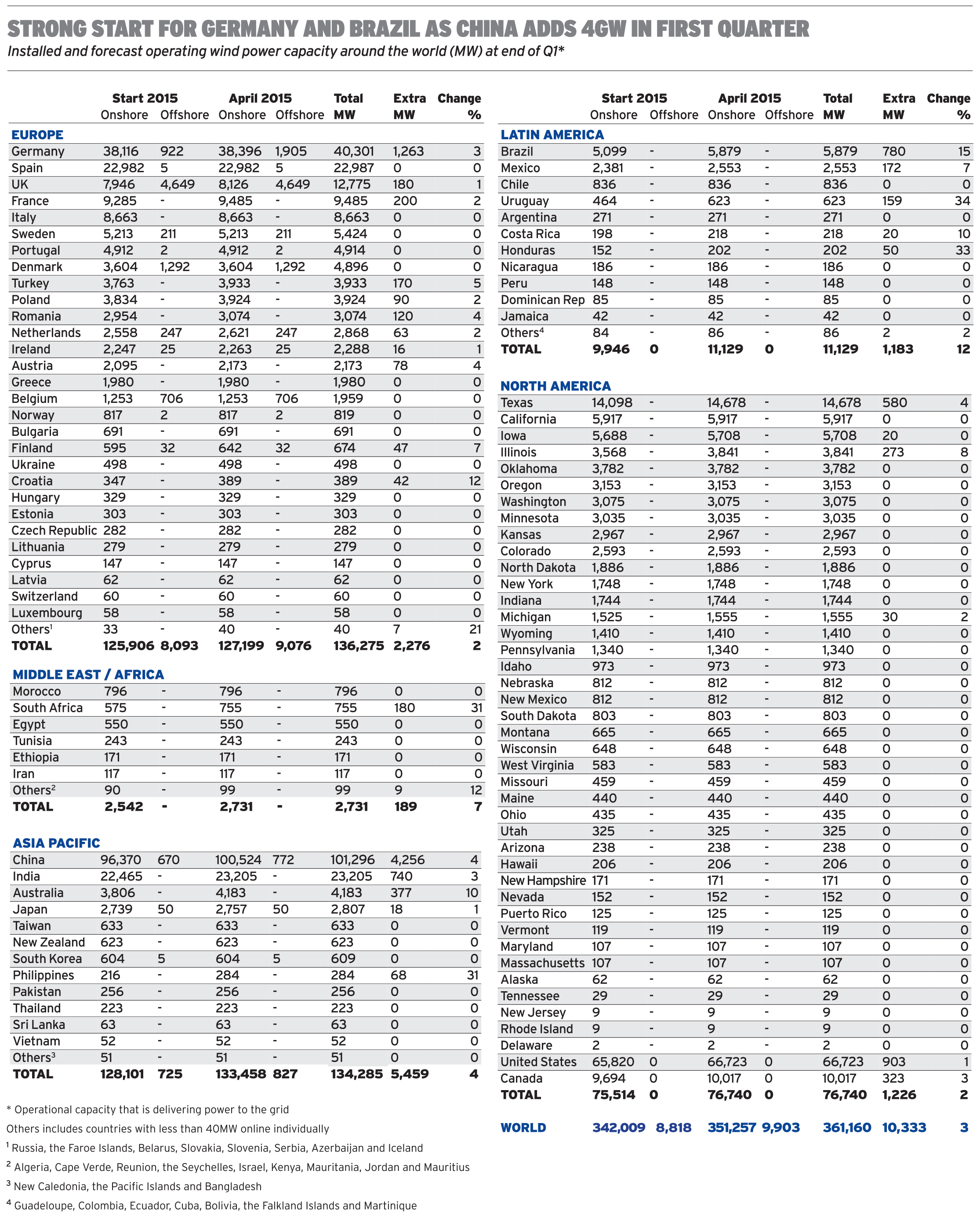