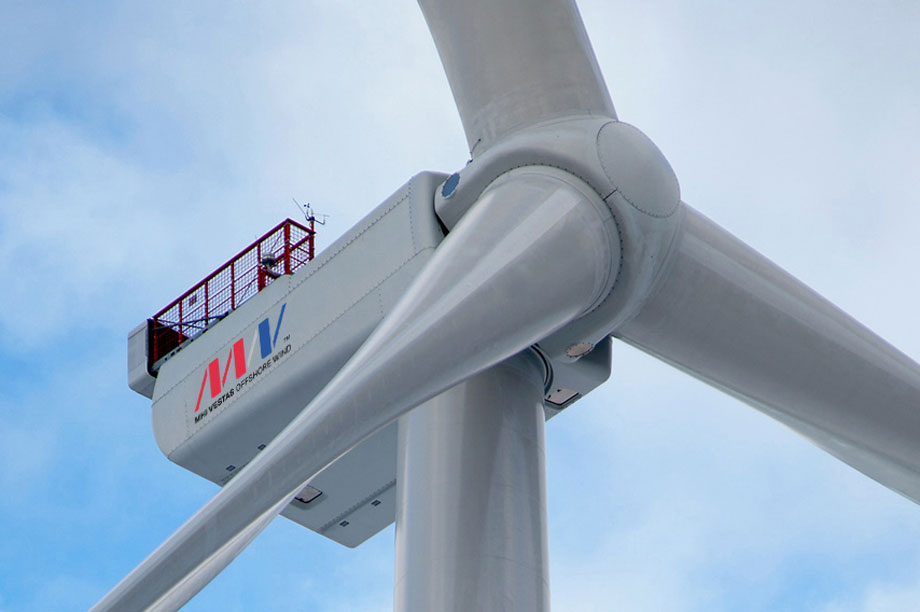 Customers/projects First commercial use will be at Dong Energy's 256MW Burbo Bank extension, in the Irish Sea

The V164-8.0MW is the world's most powerful commercial turbine, with the largest rotor.

Vestas' designers avoided high-risk innovations in favour of state-of-the-art technology in a largely evolutionary design and scaling process. The compact, tube-shape drivetrain is a self-supporting structure, with the main shaft housing mounted directly on a cast main chassis.

The main shaft is supported by two bearings and connected to the planetary gearbox and generator via a flexible shaft coupling, which enhances transfer of "pure" rotor torque in the gearbox. Bolted flanges virtually eliminate misalignment risk between individual drive elements.

The cast chassis comprises vertical and horizontal sections, with the latter mounted atop a yaw bearing, a solution that combines stiffness and strength, and optimises nacelle mass to about 500 tonnes, removing the need for a separate generator chassis. 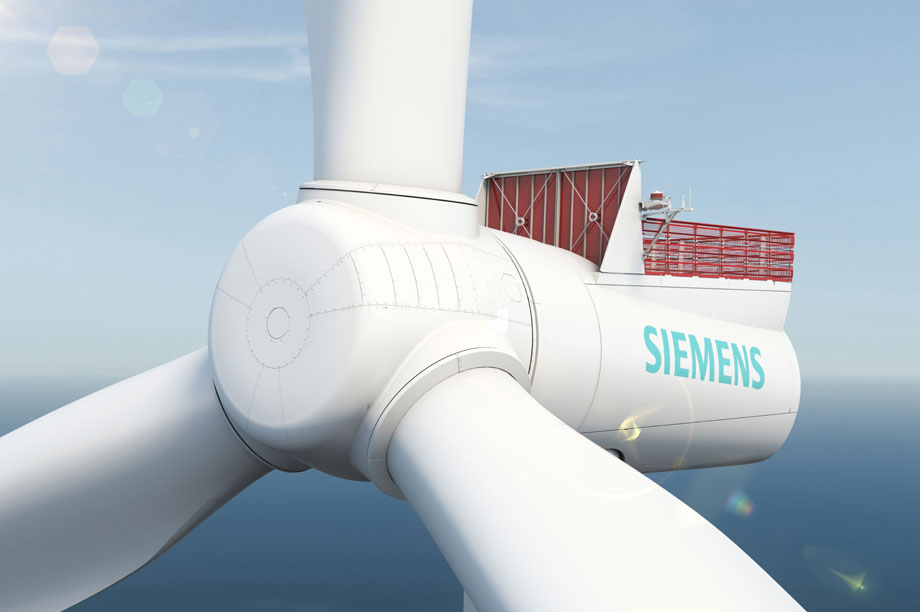 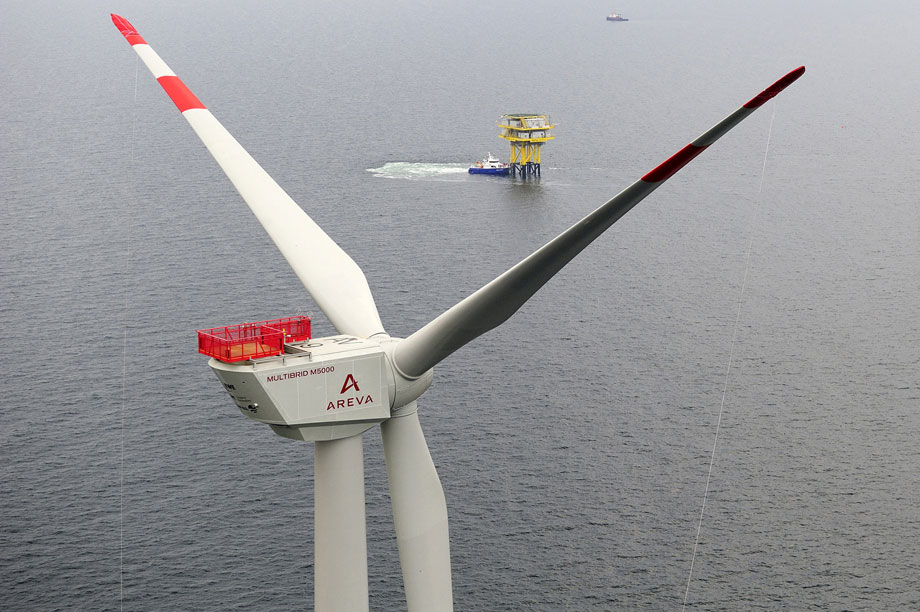 Development stage Prototype with longer blades than 2009 predecessor has been operating in Bremerhaven, Germany, since late 2013. Now starting series production

Customers/projects Specified by Iberdrola for the 350MW Wikinger project in the German North Sea. The Gamesa/Areva joint venture now has two 5MW platforms, and will work on the optimisation of both

The M5000 was developed and patented from the mid-1990s by German consultancy Aerodyn, and further developed and commercialised under Areva Wind.

The M5000-135 is an evolutionary development of the 5MW M5000-116 offshore model, first employed at Alpha Ventus in Germany in 2009 and featuring a spacious nacelle with integrated helicopter hoisting platform.

Multibrid stands for Multi-megawatt and hybrid, and is the first true hybrid of direct-drive and high-speed geared drivetrains. The concept was the outcome of studies that emphasised low head mass and high reliability as the most important design criteria. The fully integrated drivetrain solution comprises a single rotor bearing, a "1.5-stage" planetary gearbox and low-speed PMG together in a single load-transmitting cast structure. Generator bearings form an integral part of the gearbox assembly, but this means a main mechanical drivetrain failure requires a full nacelle exchange.

Another unusual feature then was the use of journal bearings in the gearbox, now becoming more widely adopted by the industry. Particular attention was paid to redundant systems and protection of sensitive components in harsh offshore conditions. 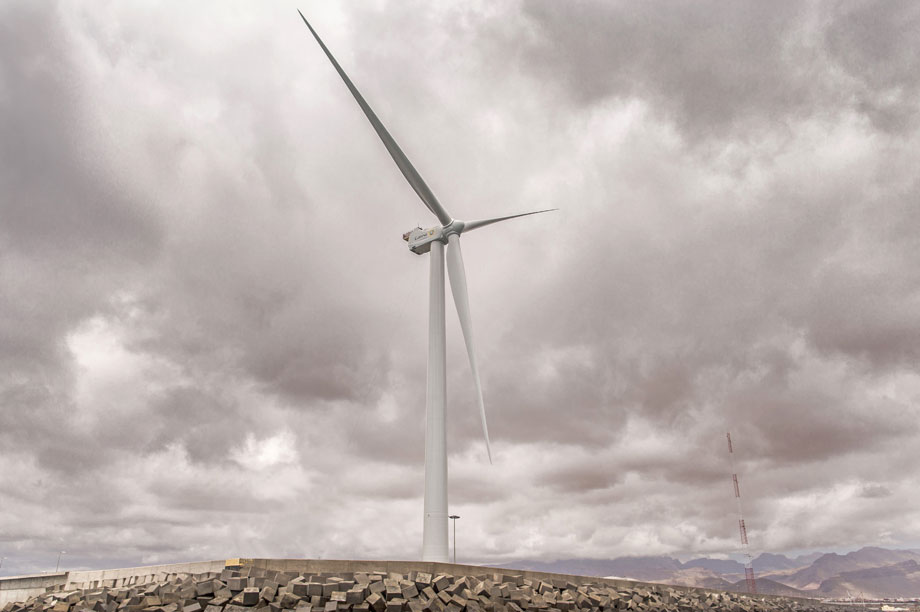 Development stage The G128-5.0MW offshore prototype was commissioned in July 2013 and has an IEC type certificate. G132 certification is in progress

Gamesa's G128 onshore model and its G132 sister are evolutionary upgrades of the G128-4.5MW, first seen in 2009. They feature a tube-shaped semi-integrated drivetrain comprising a housing plus two-bearing main shaft assembly flanged to a two-stage planetary gearbox.

A key feature of the G128-5.0 offshore model is a head mass of just 268 tonnes, compared with the 375 tonnes of the Areva M5000. Gamesa says this will enable the use of monopile foundations in depths of up to 35 metres.

Areva was said to be at an advanced stage in the development of an 8MW prototype turbine before its offshore joint venture with Gamesa was confirmed last July. Building on the technology employed by its M5000 Multibrid, Areva claimed a favourable head mass (nacelle and rotor) of 520 tonnes.

France looks likely to provide the first customers for the 8MW turbine. The GDF Suez-led consortium has specified it for the 500MW Le Treport and Noirmoutier offshore projects, although installation at the 500MW St-Brieuc project off the coast of Brittany could come sooner, with developers Iberdrola and Eole-RES redesigning the site to suit the joint venture turbine. 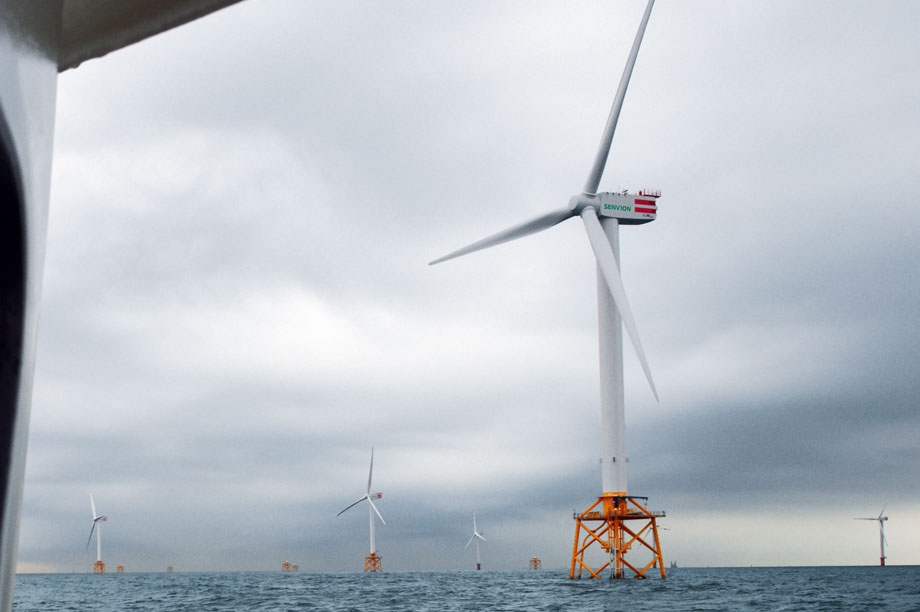 Development stage Prototype has been operating since December 2014 in northern Germany. Model could enter series production this year, while the renamed 6.2M126 with 126-metre rotor diameter remains part of the 6.2XM series

Customers/projects No commercial projects have been announced yet

Senvion (formerly Repower) was founded in 2001 and three years later became the first manufacturer to install an offshore-dedicated 5MW turbine, with what was then a record rotor diameter of 126 metres.

It featured a non-integrated high-speed drivetrain comprising a main shaft supported by two bearings (enabling one-day gearbox exchange without removing the rotor), a three-stage gearbox and doubly-fed induction generator (DFIG). The frequency converter, rated at 20% of turbine nominal power, is located in the nacelle together with the medium-voltage-transformer.

In 2009, the company installed three 6.15MW prototypes with unchanged rotor diameter - in essence, a limited-risk evolutionary development of the 5MW model. Key modifications included a strengthened drivetrain capable of absorbing 20% higher torque, and a much higher 6.6kV generator stator voltage.

The 6.2M152 features an enlarged 152-metre rotor, which demands rotor speed reduction and further drivetrain strengthening, although the model should be considered as an evolutionary rather than entirely new product. The larger rotor plus the unchanged 6.15MW power rating brings it fully into line with its main 6MW class competitors, especially those produced by Siemens and Alstom. 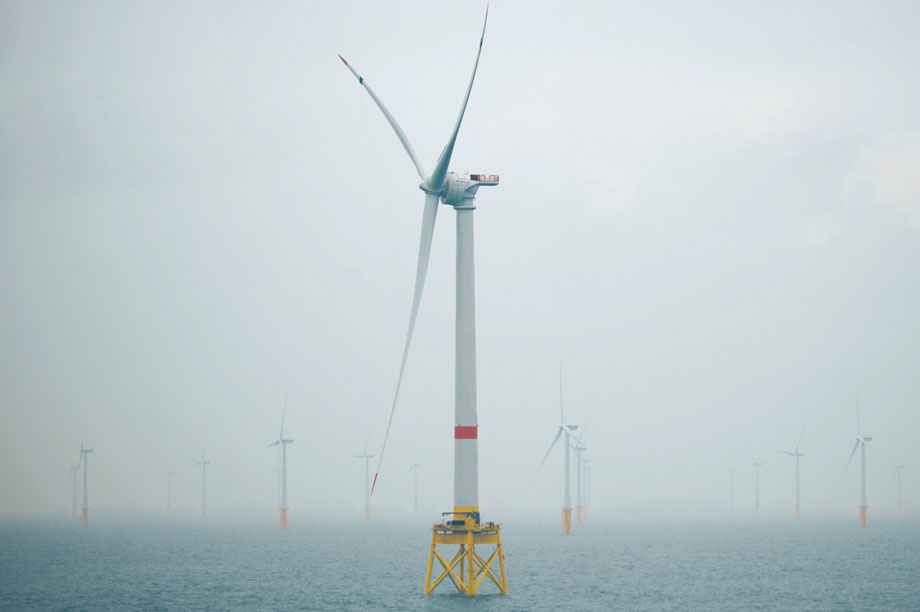 Customers/projects A consortium led by EDF EN has specified the Alstom unit for three offshore projects in France. But the first commercial application could be Deepwater Wind's 30MW Block Island in the US, scheduled for commissioning in 2016

The 6MW direct-drive Alstom Haliade turbine features a 150.8-metre rotor. Electrically, the medium-voltage generator consists of three 120-degree stator sections, with each section feeding power into a separate electronic converter. In the event of partial generator and/or converter failure, the turbine can continue to function with two active segments, or even one.

The slender, load-reducing 73.5-metre blade is a co-development with LM Wind Power. The power electronic converter and transformer are located in the tower foot to optimise head mass. The hollow main shaft has a manhole for service access to the rotor hub, while an incorporated rail system enables easier exchange of heavy components, especially pitch motors.