Energy and water are inextricably linked. Water is needed for all forms of energy production, from the extraction of fossil fuels to the cooling of thermal power plant. And energy is needed to pump, treat, transport and distribute fresh water. Yet water resources are coming under increasing pressure from economic and population growth, evolving lifestyles and climate change, leading to periods of scarcity, even in parts of Europe. One of the solutions is to deploy more low-water, low-carbon generation technologies, of which wind power is a prime example.

An estimated 15% of water withdrawals worldwide (see below) are attributed to energy production, according to the International Energy Agency. In Europe, power generation alone accounts for 44% of withdrawals, the European Wind Energy Association revealed in its recent Saving water with wind energy report. And this share is likely to rise as global demand for electricity increases.

"Growing demand for limited water supplies places increasing pressure on water-intensive energy producers to seek alternative approaches," states the UN's World Water Development Report 2014. Already, power plants have had to be shut down because of lack of water for cooling while droughts are restricting hydropower capacity, the report notes. Water availability is likely to constrain the expansion of the power sector in many emerging economies. It is increasingly important that the water usage of different generation technologies, particularly the amount actually consumed, plays a role in deciding future energy strategies.

The role of water

Water is used in primary energy production, such as coal and uranium mining, oil and gas extraction, oil refining and growing crops for biofuels. While these activities generally consume less than those related to electricity generation, the discharged water is often contaminated and needs careful treatment to avoid harmful environmental impacts.

The vast majority of water consumed in the energy sector is lost through evaporation in the cooling systems of thermal power plants. Such facilities, which can be fuelled by nuclear, coal, oil, gas, concentrating solar power, geothermal or biomass, account for roughly 80% of global electricity production. Water consumption varies according to the plant's technology and the cooling method. The highest rates are found among closed-loop cooling tower systems. In these, the water is recirculated, but losses through evaporation are 50-80% higher than in older, once-through systems. Alternatively, dry-cooled power plants, using air-cooled condensers, consume little water but are less efficient and more expensive.

Of the different thermoelectric technologies, wet-cooled concentrated solar power (CSP) plants are the most water intensive, followed by nuclear and pulverized coal (PC). According to an analysis commissioned by Vestas and confirmed by other studies, a wet-cooled CSP plant will consume around three cubic metres per megawatt hour (see chart, left). This compares with 0.7m3/MWh for a natural gas combined-cycle plant (NGCC), the lowest of the fossil fuels. Adding carbon capture and storage (CCS) to fossil-fuel plant can increase water consumption by up to 90% because steam is used to regenerate the solvent used for scrubbing out the CO2, and the process requires additional cooling.

On the other hand, using advanced dry-cooling techniques for CSP plants reduces water consumption to zero, with minimal amounts required for mirror washing in some places, although at the expense of efficiency. Likewise, losses attributed to geothermal and biomass generation can range from zero upwards, depending on the cooling technology employed.

Wind and solar photovoltaic plants require no water during generation, making them ideal for water-stressed regions. "Wind power is drought proof," says Rina Bohle Zeller, global policy expert at Vestas. As a low-carbon energy source, wind also helps mitigate climate change and any associated increase in water scarcity, she adds. Furthermore, Vestas has found that wind resources are good in many areas that are experiencing, or are forecast to suffer, water shortages (see map). 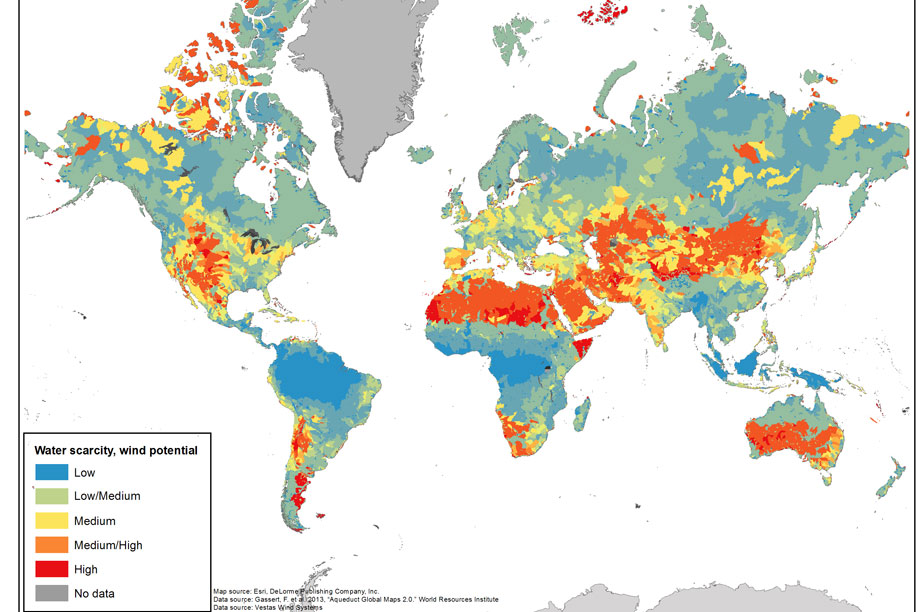 In very rare circumstances, for example, where dust or other air pollutants adhere to the turbines' blades without enough rainwater to clean them, they might need washing. Gamesa recommends once a year in the most extreme cases and estimates the process requires 0.1m3 per blade using pressure equipment. Small amounts of water are also consumed during the lifecycle of a wind-power project (see below), but because the equipment is invariably manufactured elsewhere, this is relevant to overall sustainability and does not affect water supplies at the installation site.

The other point that has to be taken into account is the variability of wind and what power sources are used to provide back-up. This generally tends to be hydropower or natural gas, both of which have their advantages and disadvantages from a water resource and climate-change perspective. Large hydropower reservoirs in hot areas can lose significant amounts of water through evaporation, while natural gas plants require some water and emit greenhouse gases, although much less than other thermoelectric facilities.

Water shortages are already having an impact on power generation in many parts of the world. Lack of cooling water in recent years has caused thermal plants in India, Europe and the US to curtail production or shut down completely. In 2003, Electricite de France had to shut down a quarter of its 58 nuclear plants due to water shortages. Other impacts include reduced efficiency of power plants, price hikes, legal challenges and concerns over the environmental effect of overheated water discharges.

"Water scarcity, variability and uncertainty are becoming more prominent, potentially leading to vulnerabilities of the US energy system," warns a recent report by the US Department of Energy. Prolonged drought throughout the south-west is already causing problems. California's hydrolectric reservoirs are at all-time lows, while in June the grid operator warned that up to 1.15GW of gas-fired generation might have to shut down because of the lack of cooling water. In response, thermoelectric plant in California now have to use water-conserving air-cooled systems, while developers of large solar thermal projects are changing from wet to dry cooling.

California and other states are also turning away from coal and deploying more wind, solar and natural gas generation to save water. Indeed, the American Wind Energy Association (AWEA) says that record wind and solar output this summer in California played a key role in keeping the lights on. Overall in the US, AWEA estimates that wind power saves around 0.45m3 of water per person a year by displacing conventional generation, mainly coal and natural gas, says Michael Goggin, AWEA's director of research. The severe droughts "are putting an added spotlight on water use for electricity generation", he adds.

China is also facing a growing water crisis due to rising demand and increasingly frequent and severe droughts. Coal-fired generation supplies 70% of China's electricity needs, many of them old-fashioned water-cooled facilities. Those in the arid north are now encouraged to use dry-cooling technologies and the government is also developing new coal-fired generating technology that will cut water consumption by half. Other water-saving measures include investing heavily in renewables such as wind and solar. China's generating capacity is expected to double to nearly 2,500GW by 2030, of which 200GW will be wind power, up from 83GW today. Even so, 87% of generation will still be water-reliant in 2030, as opposed to 97% today, the non-profit China Water Risk initiative estimates.

Governments in China and elsewhere are becoming aware, perhaps belatedly, of the challenges posed by water shortages in the energy sector, and the need for integrated water-energy policies. "If we know already that we are going to face water scarcity and don't take the water consumption of the electricity generation into account, we are running into huge problems," says Vestas' Zeller. In an increasingly water-constrained world, concerns over water shortages should give wind an extra competitive advantage.

WIND LIFECYCLE — WATER USE DROP IN THE OCEAN

Because the ISO standard for assessing "water footprints" - the water used to produce different goods and services - has only recently been released, there is not yet sufficient reliable data to compare generation technologies. However, Vestas has been carrying out cradle-to-grave assessments of its wind turbines since 2001, evaluating the potential lifetime environmental impacts associated with producing electricity.

For example, Vestas calculates that over its lifetime, power generated from a V112-3.3MW machine consumes around 0.059m3 of water per megawatt hour. Most of this relates to the manufacturing phase, primarily the production of iron and steel.

By comparison, a natural gas combined cycle plant - the least water-intensive of conventional generating technologies - consumes around 0.7m3/MWh for generation alone (see chart, first page), without taking into account the water used in producing the gas, and the building and decommissioning of the plant.

Water use is defined using two distinct terms. Water "withdrawal" applies to water that is removed from a source, such as a river, some or all of which will be returned to the source, although often at a higher temperature or polluted by chemicals.

"Consumption" refers to water that is withdrawn but not returned, typically being lost through evaporation in cooling towers, which reduces the amount of water available to other users within the water basin. Therefore, when examining the sustainability of power plants, the crucial figure to consider is on-site water consumption.

Hydraulic fracturing (or fracking) forces vast quantities of water - usually extracted from local surface or groundwater sources - mixed with sand and small amounts of chemicals into wells in order to open fissures in the shale layers to extract natural gas and oil. It is also used in some geothermal systems.

The amount of water used varies depending on the well and the characteristics of the rock being fractured, but it ranges from less than 190m3 to thousands of cubic metres per well, according to the US Ground Water Protection Council's FracFocus website. "We consider this water consumed because even water that is not recycled for use in other fracturing jobs is typically re-injected into disposal wells and thus is removed from the usable water cycle," says Mike Nickolaus, special projects director at the council.