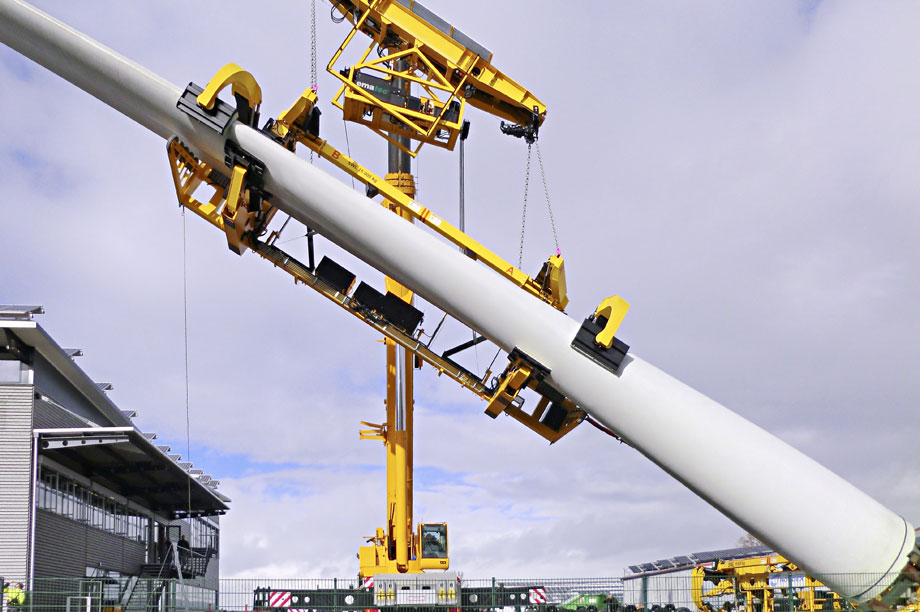 Ematec has introduced an innovative "bunny" version of its RBT rotor blade lifter, which incorporates a special beam design allowing the installation of blades on direct-drive turbines in a bunny-ear configuration. The main benefit is that no auxiliary drive is required to turn the hub during installation of the second and third rotor blades.

The German company hopes to provide "scientific proof" that its rotor blade lifter will be able to operate in high wind speeds. It is currently approved by turbine makers for assemblies in wind speeds of up to 9 metres per second, but Ematec's wind tunnel research indicates that it could achieve approval for wind speeds up to 13m/s.

"It is not uncommon for wind-farm construction sites to be at a standstill for days or even weeks on end because it is simply too windy to pull up rotor blades," says Ematec CEO Manfred Eberhard. "Such a standstill costs enormous amounts of money. The faster the rotor blades can be installed, the better for everyone involved."

So a latest generation filter element offering low pressure loss and high dirt holding capacity is the key component in Argo-Hytos's FNA 110 filter unit. It enables the use of highly viscous oils in turbine gearboxes, which improves their functioning and extends their operating lifetimes.

An integrated protective strainer in the filter elements protects the gear from coarse contamination, and the volume flow can be controlled directly to the gear or via the cooler by means of different valve technologies. It all adds up to a effective cooling and lubrication system with clean oil.

The reliable, long-lasting and leakage-minimising transfer of fluid flow from stationary systems to rotating machinery is a technological challenge for many industries, not just wind power.

German firm Dueblin has worked in this field for more than 60 years. Its rotating unions, a critical component in a wind turbine's hydraulic pitch control systems, are custom-made to the specification of OEMs, and are designed with consideration to a wide range of media, viscosities, temperatures and pressure ranges

With a capacity of 1MWh and peak power of 325kW, the Vanadium Redox Flow battery delivered by Vanadis Power to the BWP Braderup-Tinningstedt wind farm earlier this year is one of the biggest battery storage systems in Germany.

The storage system is designed to optimise the project's electricity feed-in capabilities, by participating in electricity trading or through the delivery of ancillary services such as regulation energy.

The Vanadium Redox Flow technology is considered to be one of the most promising types of high energy storage. The batteries have a long lifetime - 20 years - in which they can be charged and discharged constantly without capacity degradation, according to the manufacturer. Compared with other large capacity systems their costs and fire risk are deemed to be low.

Firm evidence of the rapid progress in large offshore wind turbines will be on show at Hamburg with MHI-Vestas, the new Areva-Gamesa joint venture, and engineering consultancy Aerodyn all providing further information on their 8MW turbines. 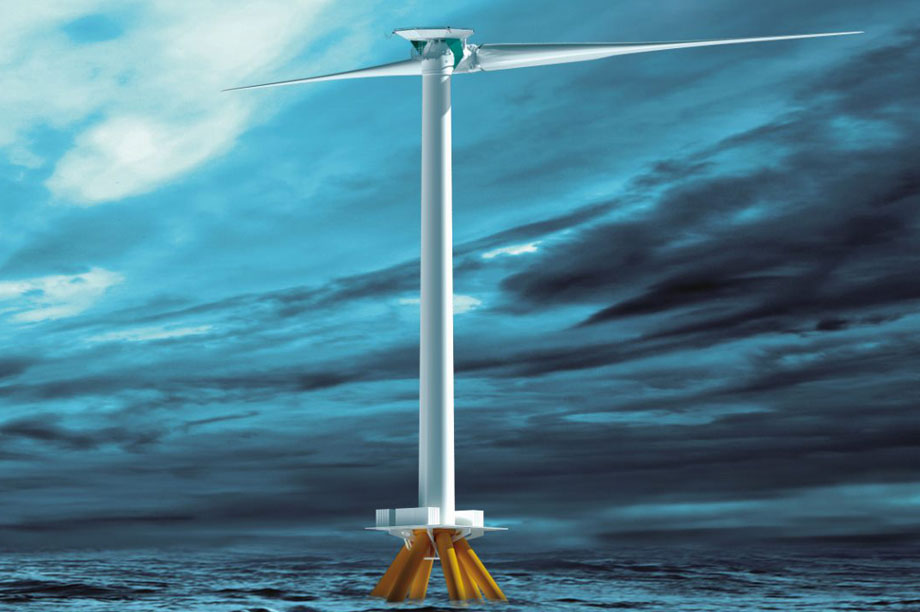 The Aerodyn SCD, pictured right, is the odd one out in this trio of titans, deviating from the tried-and-tested configuration of the three-blade upwind turbine on fixed-bottom foundations in favour of a two-blade downwind machine designed to operate on a floating platform. "Our overall turbine-and-floater concept offers specific benefits in terms of instant load reduction," says the company.

Not quite so large but still substantial is Senvion's latest offshore model. A prototype of its 6.2MW turbine with the rotor blade diameter extended from 126 to 152 metres is now being constructed.

The trend towards more powerful turbines and longer blades is equally pronounced onshore. Enercon is set to launch a turbine that will fill the gap between its 3MW and 7.5MW machines, details of which remain well under wraps. Senvion and Nordex are developing 3MW machines for IEC class III sites, Senvion's with a rotor diameter of 122 metres, and Nordex's with a class-leading 131 metres.

US-based AMSC's low-wind 2MW geared turbine has a double-fed induction or a synchronous/asynchronous generator option, and a rotor diameter of 113 metres. ASMC is working with a licensee to build a prototype.

Drivetrain specialist Winergy is showing its latest 3MW HybridDrive gearbox. Lauded for its high torque-to-weight ratio, low mass and compact dimensions, HybridDrive combines a two-stage planetary gearbox with a flange-on permanent magnet generator. Unusually, it can be specified with standard or journal bearings in both gear stages, with the journal bearings resulting in less abrasion and increased availability. Journal bearings are also used for the generator. Winergy has also developed a 2MW, three-stage, high-speed gearbox that uses journal bearings. 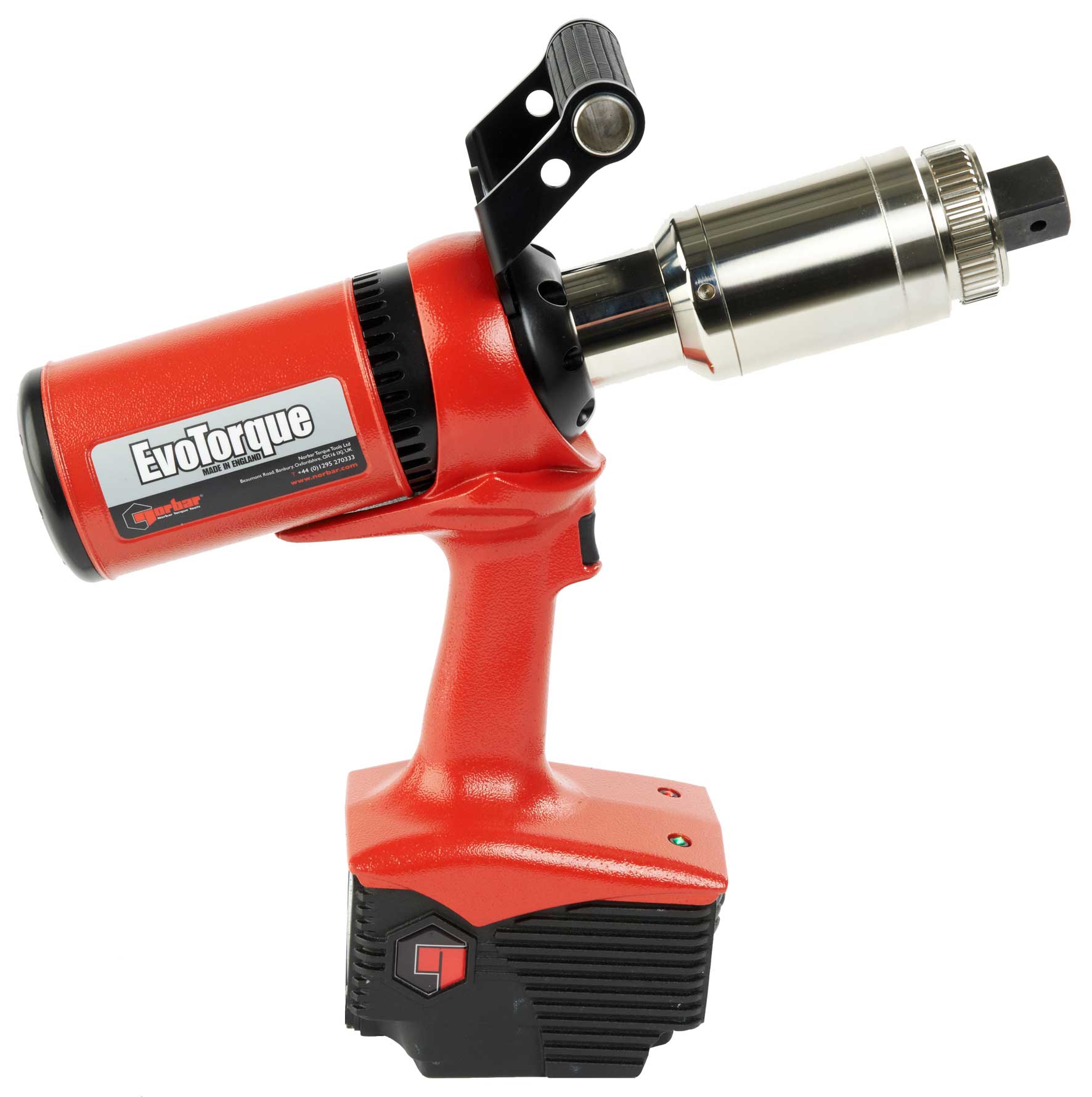 Using patent-pending motor technology and control software, Norbar's EvoTorque tool provides operators with the correct torque output from hard through to soft joints. It can also be used on pre-tightened bolts as part of a joint verification process.

Available in 110V and 230V versions, the EvoTorque is weather-sealed and equipped with a maintenance-free motor. The torque and angle control can be selected by the user and a clear signal on the tool indicates when the correct settings have been achieved. 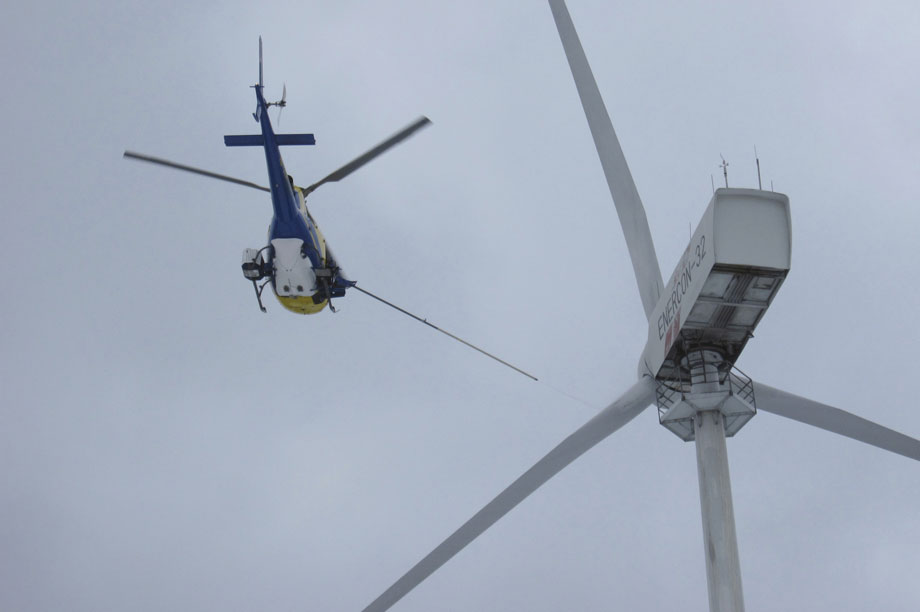 As wind power moves into more remote locations, often on higher ground and in colder climates, the requirement for de-icing and cleaning of rotor blades continues to grow, as does the need for simple ways to achieve this.

The Simplex Aerospace Model 510 system, which has been certified by the European Aviation Safety Agency for installation and operation on Airbus AS350 and AS355 helicopters, is claimed to provide a number of advantages over conventional clearning methods.

Its system's 800-litre water tank increases the availble operating time between refills, and the nozzled boom extends past the rotor tips to provide extended washing distance. According to Simplex, wind turbine operators are reporting up to eight times increased productivity with this system over ground-based cleaning techniques. 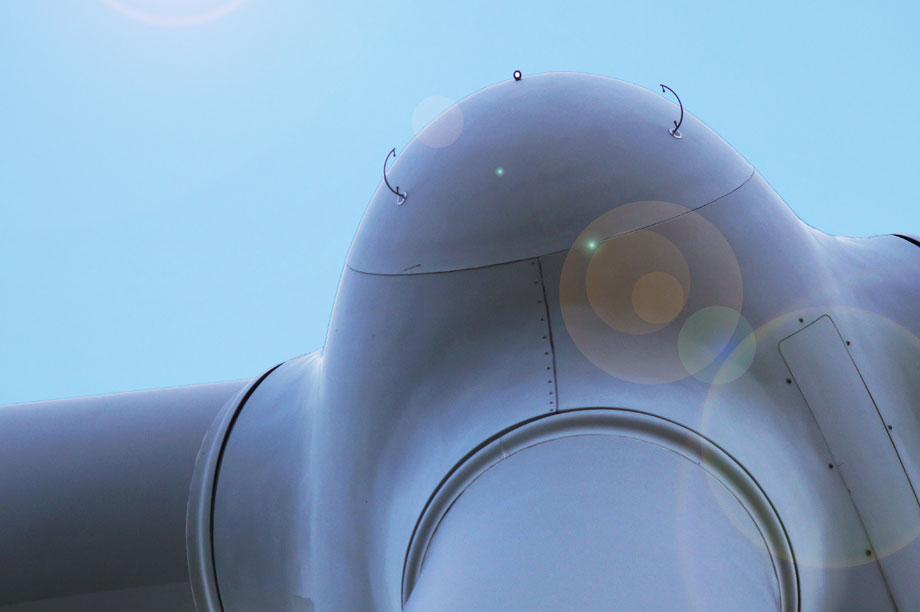 Wind sensors are usually mounted in the turbine's nacelle, where their measurements are used to control start-up and shut-down, yawing, and, to some extent, optimisation of the rotor-blade pitch angle. Their measurements are also used to evaluate power curves and turbine performance.

But in upwind turbines, the nacelle is behind the rotor, and the rotor's turbulent effect on the wind driving the turbine compromises the accuracy of the sensors' measurements. Sensors in this position also fail to detect the presence of static yaw misalignments.

The iSpin technology developed by Romo Wind aims to fix this problem by measuring the wind with sensors that can be quickly and easily installed in the spinner, where the influences of the wind turbine rotor and spinner geometry on the flow are predictable and can be corrected for.

Romo Wind claims the iSpin technology has increased the wind energy production of its clients by more than 2% solely by correcting static yaw misalignments. It also identifies other potentially damaging wind conditions that can cause increased loads and extra maintenance costs.

The focus on optimising turbine performance is reflected in the orders that Deif Wind Power Technology claims for its new-generation Integrated Motor Drive. Its 2014 book has more than a thousand orders for this all-in-one pitch drive, an interesting approach to a vital function.

The motor drive incorporates components such as EMC filters, choke and power supply, which are aimed at eliminating both the risk of errors and the need for man hours during installation and service.

The drive has been HALT (highly accelerated life test) proven to comply with a 20-year operating lifetime of a turbine and has been certified according to the industry's machine safety standards.

The use of highly sophisticated remotely controlled and robotic vehicles and systems allows integrated OEM and service company Collineo to provide a complete wind-turbine inspection service from the ground.

Collineo, which provides inspection and data-gathering products and services in field operation industries, claims its system is capable of detecting rotor blade hairline fractures that measure only 1mm. Also, that it can inspect an average of four wind turbines a day, cutting machine downtime to a minimum.

A clever device that could offer many benefits to the wind industry, especially during turbine assembly before the installation of a permanent elevator, the HighStep Lift provides easy access for working at height.

The system consists of a maintenance-free aluminium rail, which is fixed to the turbine tower. Climbing is conducted either by using a mechanical gear or a fully automatic lift. Both allow climbing in an upright position and secure the climber to the rail at several points.

Eolotec's new MBU, a fully integrated design, is lighter and more compact than previous units. The use of specialised sensors allowes the pre-load of the tapered roller bearings to be set and monitored with a high degree of precision, claims the company.

Developed in direct response to a request from turbine manufacturer Siemens, Equalizer International's new wind-turbine tower alignment tool will be used to resolve bolt hole misalignment on flanges inside the turbine tower sections during assembly or installation.

Turbine towers are made up of pipe sections with internal bolted flange connections. These sections can become ovalised during fabrication, resulting in the misalignment of the bolt holes, which complicates and lengthens the time taken to assemble the towers. The new tool, Equalizer's first for the wind industry, is designed to address this issue.

"The expertise we have developed over the past 20 years in the oil and gas industry is very transferable to renewables," says Equalizer chairman Ian McCormick. "Both sectors face similar issues in pipework and flange alignment and maintenance." 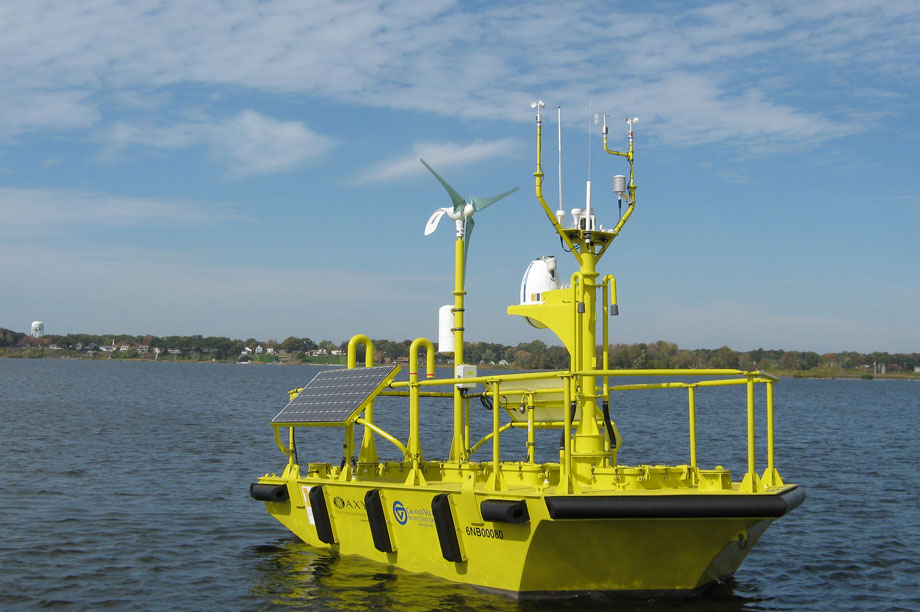 Chosen by a number of offshore developers for research and financing purposes, the WindSentinel from Axys Technologies has also been deployed by companies aiming to reduce the costs and risks associated with offshore wind resource assessment.

The WindSentinel is a wind resource assessment buoy that uses Lidar to measure wind speed, wind direction and turbulence at hub height and across the blade span. The buoy, sensors and other key components have been engineered to perform in extreme offshore environments.

The package includes two-way capability that allows for remote system management, including configuration and diagnostics, to all onboard systems and data in real time. A variety of telemetry options are available.