Vestas was clearly dominant in terms of the capacity of new turbines going online in the early 2000s, but a number of factors came into play that boosted Siemens' market share and dented that of Vestas.

According to data from our sister site WPO Intelligence, Siemens is set to dominate the offshore market in 2017 with over 10GW installed, more than double its nearest two competitors combined.

Back in the mid-2000s it would have been harder to predict this outcome. Siemens was neck and neck with Vestas in terms of offshore installations and the future market was up for grabs. By 2007, following a series of decisions and product issues, Siemens was starting to show itself as a clear leader.

One key development came with Siemens' introduction of its 3.6MW offshore-specific turbine. The machine has come to dominate the offshore wind market since it was first installed at the 90MW Burbo Bank project in the UK in 2007. Indeed, it is described as the "work horse" of the offshore industry and covers around 6GW in installations.

Another tipping point came with Vestas' gearbox issues with its own V90 turbine. Despite the introduction of the V112, Vestas has more V90s installed than any other turbine. In 2007, Vestas pulled the turbine from the market following problems with the planet bearing. Famously, it had to replace the gearboxes twice at the 90MW Kentish Flats project in the Thames Estuary. 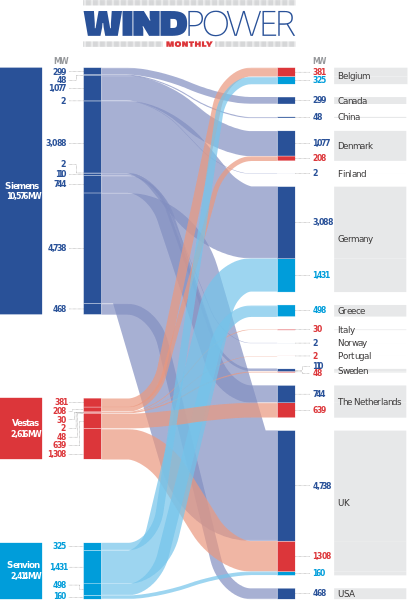 The effect of the 3.6MW turbine's success can be seen in the data, with Siemens installations shooting up in the period that followed. In 2007 the German manufacturer switched on 200MW of offshore capacity, compared with 1.4GW in 2013. This stands in stark contrast to the 48MW that Vestas set spinning offshore last year.

While Siemens was storming ahead with its new turbine, Vestas continued to install its V90 3MW turbine on projects as late as 2010.

This further dented the company's offshore market share, which fell to 2% of turbines brought online in 2013, from its dominant position of 100% in both 2005 and 2006.

Vestas is now attempting to take back the initiative in the offshore market with the development of the V164 8MW turbine, which is now being marketed under its joint venture with Mitsubishi Heavy Industries. Vestas already has an order in the bag from Dong Energy for the 258MW Burbo Bank extension.

Meanwhile Siemens is a step or two ahead and has started installing its 6MW turbine on commercial projects. Orders include the 400MW Dugdeon and 330MW Gode Wind 1.

It remains to be seen what these recent developments at both companies will do to the offshore wind landscape. Siemens dominance should not be taken for granted as MHI Vestas comes to the table with the world's most powerful turbine. There are a number of projects without turbine deals and Vestas could take advantage of that, changing the topline of our current 2017 prediction.