France
News Analysis
The German technology giant announced on 29 April that it will make an offer to Alstom, on condition that the French manufacturer allows it one month to access its company data and interview Alstom management, to enable a reasonable due-diligence assessment of the business.

One option may be for Siemens to combine its energy and transport divisions with those of Alstom, and locate their headquarters in Germany and France respectively. As the takeover unfolds, the wind sector looks like a fringe activity buffeted without direction.

Siemens' wind and renewable business sector, with an annual turnover of roughly €5 billion, is the smallest of its ten business sectors, equivalent to about 7% of the €75.9 billion total 2013 revenue. And the company's focus on conventional energy business, especially oil and gas, is underlined by the choice of Lisa Davis as designated new head of energy.

All three companies have grown through acquisition. Siemens entered the wind sector by buying Danish company Bonus in 2004, after GE had bought the wind turbine manufacturing assets of the bankrupt Enron Corporation in 2002. Alstom followed suit by buying Spanish turbine manufacturer Ecotecnia in 2007. 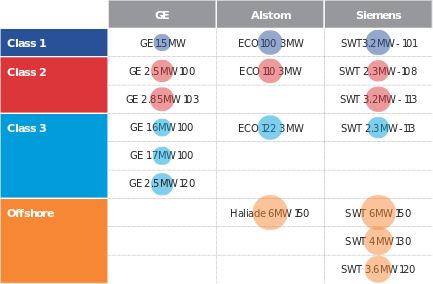 The potential co-investor option provided by Siemens Financial Services in capital-intensive offshore projects gives Siemens a strong profile, and acquisition of Alstom could remove a competitor from the offshore market. Offshore turbine players are seeking to spread the offshore wind risk in joint ventures, most recently Vestas Wind Systems and Mitsubishi Heavy Industries, which announced the official launch of their 50/50 offshore wind joint venture MHI Vestas Offshore Wind in April.

Areva revealed its exclusive negotiations with Gamesa on their planned joint venture "to be a European champion and global leader in offshore technology" in January. Accordingly, Areva has placed its wind sector among "discontinued activities" in its renewable energies business group.

With Siemens set to implement its own new strategic plans to 2020, as aired on 7 May, focusing on growth fields in the areas of electrification, automation and digitalisation, the Alstom option was unexpected.

Siemens CEO Joe Kaeser stressed on 7 May that the company's interest in Alstom is entirely serious, and that the final decision will be made independently of outside political or other pressures. The due diligence also gives Siemens a unique chance to shine a light into the depths of Alstom's business and financial data, on where costs are high and where money is earned — for instance its business in the low-price Brazilian wind market.

An unpalatable side effect to the Alstom board supporting a Siemens transaction and rejecting GE's offer is that Alstom would then owe GE a break-up fee of 1.5% of the purchase price, at least €172 million.