With 22,000 turbines installed wordwide, GE is known for squeezing incremental advances out of a platform, as a leader in control systems and power electronics, and — increasingly — for upgrades of existing turbines.

Although Europe remains the centre of wind-technology innovation, GE's new offerings are expected to be aggressively competitive, say sources. As the wind industry's only US-based original equipment manufacturer (OEM), GE is known to be pushing on three broad fronts to reduce the cost of energy and strengthen its global reach: longer blades; advanced controls to improve energy capture; and advanced power electronics for higher power density.

GE's approach to technology emphasises evolutionary rather than revolutionary change, say industry observers, an approach that minimises research costs, simplifies the supply chain and appeals to financers. Only in the past two years has GE introduced more varied products, because it is diversifying its geographic footprint, notes Dan Shreve, a partner at Make Consulting, who previously worked in strategy, policy and marketing at GE Wind.

GE dug into its deep pockets to enter the wind market in 2002 to buy assets from bankrupt turbine operator Enron Wind, which in turn had acquired German turbine maker Tacke Windtechnik in 1997. Over the years, GE stretched its basic 1.5MW model, a turbine with German roots, largely by dramatically lengthening the rotor blades. Its 1.6-100 was considered ground-breaking, with a class-leading capacity factor when launched. The evolution of GE's 2.5MW series was perhaps less forceful than the smaller range, until the company's high-profile about-face in 2012 from permanent magnet generators (PMG) to doubly fed induction generator (DFIG).

"It's phenomenal what they've done in value engineering, piece by piece, without doing anything radical," says engineer Charles Gamble, founder of wind industry consultancy Opus Ventus. Three to five years ago, he considered GE's workhorse 1.5MW DFIG drivetrain overly conventional. At the time, DFIG was becoming less fashionable because of lower efficiency and for making it harder to meet grid codes. "But they've made (DFIG) work," says Shreve, gaining from its smaller, lighter and cheaper power conversion.

Indeed, GE's 1.5MW series remains North America's gold standard for reliability, says Amy Grace, an analyst at Bloomberg New Energy Finance (BNEF). She recalls a saying among bankers in the US and Canada - that no one has ever been fired for financing GE turbines.

GE launched its so-called Brilliant turbines in the first half of 2013, and the 1.7-100 and the 2.5-120 for lower-wind speed conditions such as in Germany. They incorporate 15-16 minutes' battery storage. GE has since launched more turbines geared towards specific global regions. The 1.85-82.5 model is aimed at the Brazilian market and the 1.7-103 was developed for low-wind conditions in India. The 3.2-103 is for height restrictions in the UK and Ireland, a market where no rival has a "home advantage", while the 2.85-100 can weather Japan's severe typhoons, turbulence and lightning strikes.

The company, famously, iced its offshore plans, citing the still-small global market and high energy costs. "In offshore, they do not so far have a reliable technology," notes Feng Zhao of Navigant's BTM Consult. "They're struggling with their strategy for offshore. I do not think it is just the market uncertainty," he says, citing constant rumours that GE may buy a company with offshore technology. 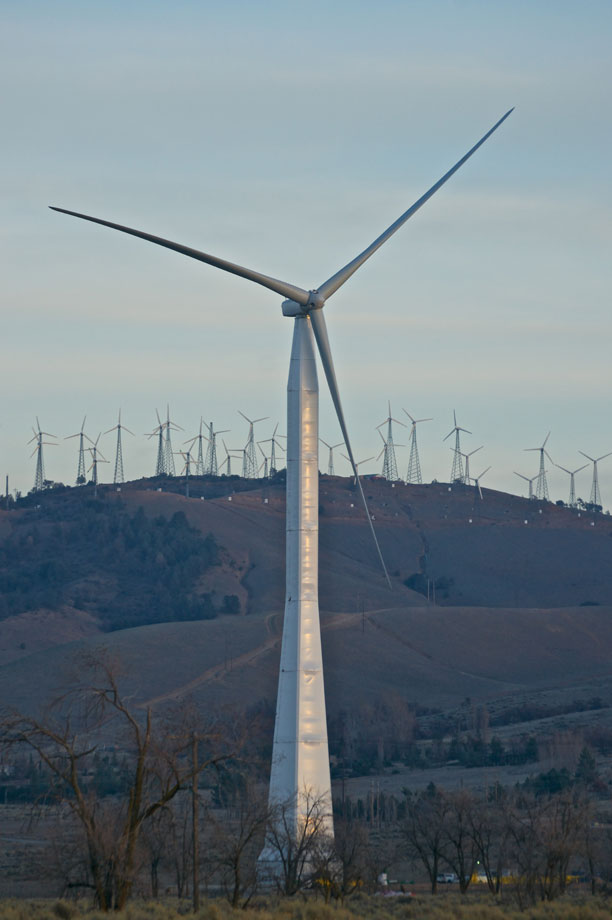 In March, GE sparked great interest by launching the space-frame tower, a lattice structure with architectural fabric that slashes the amount of steel needed and which can be transported in standard containers. The tower is being marketed for low-wind sites in northern Germany and Sweden where higher hub heights are popular, a strategy in line with tackling what analysts say is the company's trickiest shorter-term challenge - gaining a real foothold in western continental Europe.

GE's prototype 97-metre space-frame tower, in Tehachapi, California, uses 30% less steel than a tubular tower. The five-legged closed lattice tower has about 4,500 structural bolts, compared with 450 in a conventional tubular tower. Shreve cautions that much rests on any maintenance for the bolts, although GE maintains that they will not need retorquing.

Regarding the push for longer rotors, Keith Longtin, GE's general manager of wind products, points to the company's early-stage collaboration on tension fabric blades. "We want to take the simplicity of the space-frame tower and apply it to a rotor," he says. GE says the concept, on which it is working with Virginia Tech university and the National Renewable Energy Laboratory, could cut blade production costs by 40%. Modular blades are also easier to transport, says Longtin.

The weight savings would have big knock-on benefits for major components such as the tower and bedplate, says Shreve. But he cautions that the fabric will have to cope with tip speeds of 80-90m/s and erosion on the leading edge. "Can it be stiffened sufficiently to withstand the loads?" he wonders. GE is also looking at segmented blades, says Mark Jonkhof, who runs wind technology research at GE Global Research.

The company's PowerUp software product, which GE says can increase an existing wind-farm's output by up to 5%, was launched last autumn. Improvements for existing turbines are a smart strategy in a downturn, says Navigant's Zhao. And it's a trend GE has led, since releasing its WindBoost control system upgrade in 2009.

GE has been shipping the 2.5-120 turbine with "extreme controls" for coping with extreme events for more than a year, says Longtin. Next may be lidar (light detection and ranging) sensors, he adds, to allow a turbine to adjust pitch and optimise its yaw setting according to the incoming flow field. The technology was successfully trialled late in 2013 and, if it becomes cheap enough, it could be offered on every GE turbine, he says.

The company is considering sensors on blades, rather than the "strain gauges" offered by rival OEMs, to ease load management on longer blades. And for advanced power electronics, silicon carbide converters could increase power-conversion efficiency, although the devices remain too pricey for commercial deployment, says Jonkhof.

Not surprisingly, GE is continuing to expand the concept of storage in turbines, and is reviewing the potential for fast frequency regulation, spinning reserve and even peak shifting, or for supplying power if, for example, a turbine's power is cut during a hurricane so that it can still yaw correctly.

For entire wind farms, Jonkhof says wake losses could be reduced by 10-15% by operating turbines "collectively", although the concept is not yet close to being applicable commercially. And similarly, he adds, noise at the perimeter of a project could be cut with wind farm-level controls, an approach that was being validated with a customer in March.

In 2013, GE slipped several places down the OEM global sales rankings because of its shrinking home market, despite 60% of its turbine sales being outside America. By the end of the year, GE will probably have regained much of the lost ground as the US market recovers and the firm increasingly globalises, but the pressure is on. The US market may be experiencing a mini boom, but it will not last beyond 2016 without wind-friendly subsidies. Without continuing success in new markets "it will be ugly" for GE, says Navigant's Zhao.