An article in the autumn 2010 issue of WindStats looked at the performance of these — as well as some Swedish and British — wind farms, and found that their outputs were generally in line with expectations. However, a recent analysis by the Renewable Energy Foundation (REF) in the UK has suggested that the productivity of the Danish offshore wind farms has been declining significantly with age and also concludes that "few wind farms will operate for more than 12-15 years".

This analysis therefore updates the earlier WindStats review and examines the basis for the claim that wind-turbine performance declines with age. An analysis of data from the Danish Energy Agency finds no evidence to support the claim of an age-related performance drop. Performance generally appears to be maintained at a consistent level, with only a slight decline with age — one in line with other types of power plants.Some turbines even delivered improved performance with increasing age.

Figure 1 (below) shows the performance of the six principal Danish offshore wind farms that were commissioned prior to 2010. In all cases there are fluctuations, but there are a lot of similarities between the curves. In 1999, for example, output was low at both Vindeby and Tunø Knob, but was higher the following year, before falling again in 2001. There was a sharp decline in performance at Nysted in 2007, and in Horns Rev in 2004, that reflected the need for well-documented replacements of key components. But for Copenhagen, Vindeby and Tunø Knob, there does not appear to be any evidence of a long-term decline in performance.

But those figures do not present the whole picture. As average wind speeds vary from year to year, a number of authorities have developed "wind indices" that provide a measure of the wind strength in any year, relative to a long-term mean. The Danish Wind Index, developed by Danish consultancy EMD International, has been established for many years and is a typical — and well-respected — parameter. The productivity of wind turbines during a windy year is likely to be higher than in a calmer year, and so the index provides a way of normalising such data. If the wind index is used to correct the data, then it emerges that the apparent degradation in performance is, in fact, mainly due to the somewhat lower winds in recent years. In machines where the capacity factor declined, this was due to the annual mean wind speed being lower than the long-term mean. 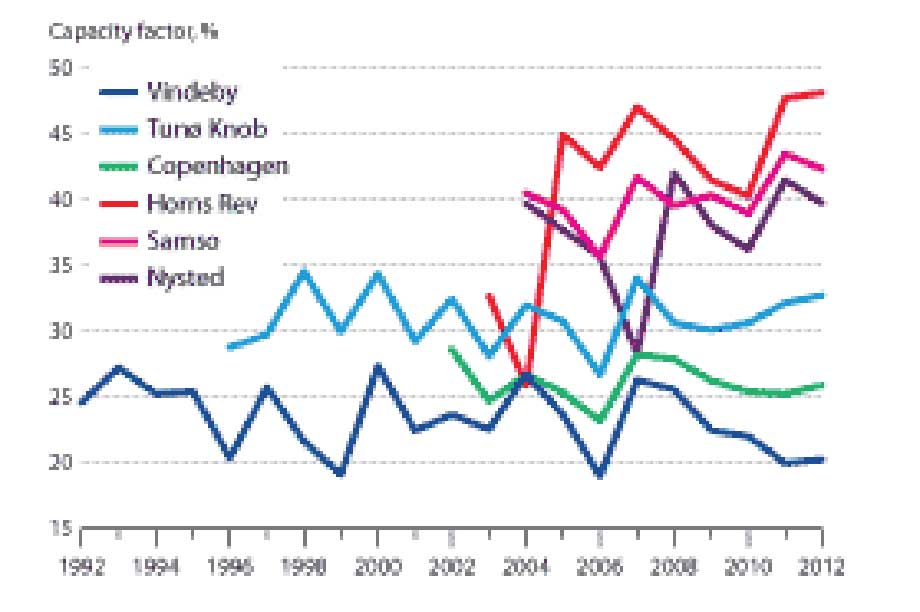 The corrected data for the three oldest offshore wind farms reveals that the Copenhagen wind farm still shows a slight decline in performance, with a 20-year capacity factor decline from 29% to 27.5%, approximately. The other two wind farms both show increases in performance. The other three offshore wind farms have not been operating for a sufficiently long period to enable reliable regression analysis to be carried out on the capacity factor data.

Despite the REF report's assertion that few wind farms will operate beyond 12-15 years, there are 1,664 operational wind turbines in Denmark that are older than 15 years; two were commissioned as far back as 1978, four in 1979 and 12 in 1980. The average age of the turbines that have been decommissioned is just under 17 years, This suggests that the projected lifespan of 20 years is realistic, bearing in mind that many of the decommissioned turbines date back to the days before the technology was as advanced as it is now, and that many turbines were replaced with more efficient units rather than decommissioned due to degradation. The performance of wind turbines over 20 years old does appear to decline as the data suggests. There are 131 operational wind turbines that were commissioned in 1989 and are therefore around 23 years old.

Here, the decline in capacity factor over a 20-year period was 0.7 percentage points. Similar conclusions were found when the performance of younger wind turbines was subject to similar scrutiny.

It is interesting to speculate on which of Denmark's onshore wind turbines has been the most productive over the years. Interrogation of the data shows that the accolade goes to three 80-metre diameter Vestas 2MW wind turbines that were commissioned in 2002. They are located on Aero, a small island in the south, between Jutland and Funen. There may have been teething troubles, as production in 2003 was significantly lower than the level later achieved. If the figure for 2003 was excluded from the analysis, the regression analysis suggests the capacity factor increased by around 2% between 2002 and 2012.