These mass- and load-optimised slender structures require a high degree of precision during manufacturing in order to meet uniform specifications. Of key importance is accurate placement of multiple glass fibre layers in a predetermined order, with their positions marked by laser-guided devices. Like most blade suppliers, Vestas further applies an epoxy resin vacuum-infusion process — whereby the thick root section is most critical with regard to mould filling — and process temperature control during the curing stage.

Rob Sauven, Vestas vice-president of wind capture systems, said that for the latest V126-3.0MW and V164-8.0MW blades, the company has switched from its proven long-time box-type structural coning spar made of carbon-reinforced epoxy to a structural shell design. Instead of the central spar absorbing a main share of the blade structural loads, the blade shells have now taken over that function. Sauven added: "Our structural spar design is well suited for large series, but for smaller numbers and very big blades a structural shell design has proven superior, with carbon use a main cost driver."

Three parallel pre-manufactured carbon insert linings integrated into each shell’s longitude axis form the core of the three shear webs. Sauven said Vestas had chosen three rather than two shear webs as gravity-based loading inside the rotor plane has become the most critical design parameter for very large blades. 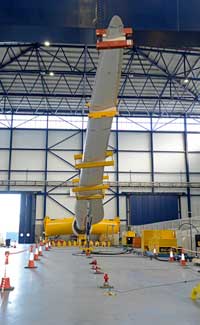 He explained: "This cyclic edgewise loading occurs during each rotor revolution, whereby a blade is first pulled up against gravity before ‘falling down’ again. We also had to take into account extreme loads occurring during an emergency stop. For better coping with these combined loads we added a third shear web towards the sharp trailing edge, which also results in a lighter blade."

Blades are being tested with an advanced methodology called calibrated accelerated life testing. Besides a "pass" or "fail" score it offers additional capabilities for better interpretation of results, material saving and extended lifetime. A test bench for pitch bearings offers a "real-life" testing environment with all relevant interfaces in place, including a full-size rotor hub with bolted-on pitch bearings and a "real" blade. One such interface is the rigid steel bearing surface and the "soft flexing" blade root composite material connection.

Sauven said that a generous 4.6-metre blade root diameter enables fitting a larger bearing capable of an elongated 25-year service life: "We test these pitch bearings up to twice the service life of bearings applied in onshore turbines whereby 20-year lifetime can be simulated in about 12 months. Of each given bearing type, six units are fully tested, including regular disassembly for inspection and measurements, grease sampling for determining remaining bearing lifetime and seals condition checks."

Vestas’s overall strategy is to build a comprehensive statistical database for all main components and systems, a process that includes the introduction of "critical to quality parameters". Sauven said: "For example, the more blades have been tested, the smaller the statistical risk margins become, and one of the key benefits is that it allows a lighter blade design. We ultimately aim to accumulate so much quantitative statistically verified data via testing and optimising that putting up a prototype will in future become almost unnecessary as we know everything already."