The 2MW Vertiwind project is being led by Lille-based designer Nenuphar, Technip and EDF EN, and has been underway since January last year when a 35kW prototype was launched.

Nenuphar founder Charles Smadja said the company was planning to test the turbine in three stages. The first one, in January, would be on the generator and electrical systems which will be housed in the tower.

The turbine has been designed with two generators, allowing Nenuphar to test them without the installation of blades by using one generator to power the other.

(left) Pylon fully equipped, without rotor Validation and characterisation of all systems without turbine. Back-to-back tests of generator and converter up to full power

The first level of blades will be installed in March, giving the turbine a capacity of 600kW. With the final stage set for testing in May.

Additionally, the project has received further boosts with the confirmation of a permit for testing off of Marseilles and funding under the  €1.2 billion from the first round of the NER300 funding mechanism for renewables technology.

However, Smadja believes that vertical-axis turbines come out on top in terms of cost of energy and installation. The low centre of gravity makes the machine more stable and minimises the gyroscopic effects.

And, although the highest point of the turbine will be 105-metres above sea level, the substructure of the platform will only be nine metres under the water. Taller horizontal turbines are as much as five times deeper. 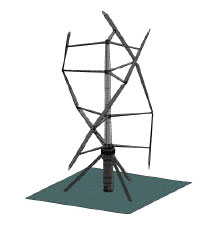