WindMade was launched in January 2011 by manufacturer Vestas and the Global Wind Energy Council (GWEC). It was a bold ambition of creating a Fairtrade-style consumer standard based on companies sourcing their energy from wind, which would also give brands a solid platform to promote their renewable policies.

Since WindMade launched with founder members including Lego, Deutsche Bank and Bloomberg, the industry has become a more challenging place. This has shown itself in the growth of the standard - beyond Vestas there have been no new partners from the wind industry.

Angelika Pullen, communications director for WindMade, said that recruiting members was a "chicken and egg" problem. To enter, companies needed proof of the requirement of the WindMade brand, but sign up was needed to push this along.

To become accredited and use the WindMade logo firms need to source 25% of their electricity from wind. This is a lengthy process, overseen by accountancy firm PWC.

Pullen said: "We would have liked broader support from the wind industry, both manufacturers and developers, and that hasn't happened. In terms of sign-up from companies, there's been interest but it takes much longer than anticipated."

Companies such as Google and Ikea have ploughed millions of pounds into wind but stayed away from WindMade. Morten Albaek, Vestas vice-president of marketing, said furnishings retailer Ikea had been involved in setting the accreditation criteria but had declined to join as it was "not a first mover in the labelling space".

Albaek added: "Quite frankly I think they are not the ones that need WindMade the most. Their commitments and achievements have been well documented in the press and the awareness level is high. It is the brands that are stuck in their shadow that really need WindMade."

Company accreditations are only now starting to trickle in. Global medical supplies company Becton Dickinson (BD) is arguably the biggest to be certified. BD director of sustainability Ellen Kondracki said the main attraction for BD was the third-party accreditation from PWC to prevent accusations of greenwash.

Bloomberg US is the only founding member to be accredited so far. It sourced 58% of its electricity from wind, but it insisted on adding 25% from biomass to its logo (see below), even though it does not count towards WindMade certification. 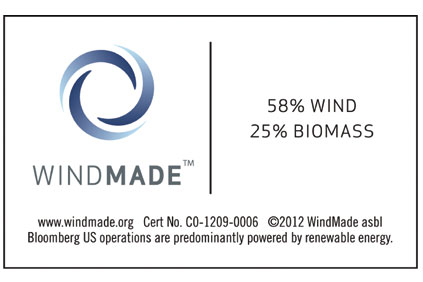 In 2010, Steve Sawyer, secretary-general of the Global Wind Energy Council (GWEC), said it would be good to add other renewables to WindMade but there were still ethical questions over biomass and hydropower.

Lee Ballin, Bloomberg's sustainability manager explained the decision: "83% of our electricity is offset by renewable energy certificates, both wind and biomass. We didn't want to just put 58% wind and not have any other way of letting the consumer know where the other 25% came from."

Other WindMade founding memebers such as Deutsche Bank, Lego and even Vestas have yet to be certified. Albaek said Vestas's accreditation is on the way and insisted the company sourced more than the minimum 25%. Other founders such as environmental campaigner WWF and GWEC have not put themselves forward for accreditation, despite the standard being set for well over a year. GWEC said it was looking into certification but this "was not the primary role of the founders".

Stephan Singer, director of global energy policy at WWF, said that although it is carbon neutral much of its offsetting comes from other renewables. He also said WindMade does not have enough presence beyond the core OECD markets. "It would be a step backwards to go for WindMade because our offset policy is not just wind."

Pullen said that WWF did not join with the intention of being accredited. "Their prime role is to lend credibility and give political and content support," she said.

Possibly the biggest hurdle for WindMade could be funding. Pullen said Vestas' funding would run out in mid-2013, then WindMade would be funded by its members. But at the moment there are not enough to make this commercially viable.

Pullen said: "We don't have enough members at the moment to make WindMade financially viable, so we are still looking for additional sponsors."

WindMade is still planning the launch of a consumer product logo and is looking to include solar and geothermal energy, according to Albaek. He added: "This label will cater to the needs of organisations with evenly balanced renewables portfolios and further accelerate uptake."