The onshore test at Østerild also represents the first use by a turbine manufacturer of Denmark’s new national turbine test centre. Eventually, the centre will boast seven grid-connected testing plots. 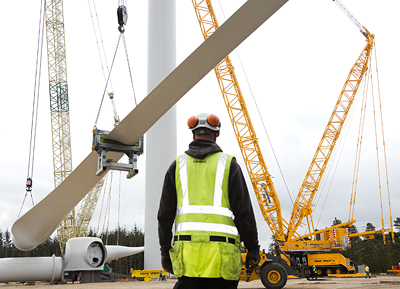 Speaking about the test, Siemens chief technology officer Henrik Stiesdal said: "The start of field testing of the 154m rotor for the 6-MW is an exciting step in the development of competitive technologies for the large offshore wind farms of the future."

Late May 2011 Siemens Wind Power installed, commissioned and put into operation the prototype of a new 6MW direct drive offshore turbine with 120-metre rotor diameter. It stands at a test site south of Høvsøre in Western Jutland, Denmark.

Dong Energy has already ordered 300 of the 6MW turbines and the two companies are collaborating on a two-turbine offshore test of the new design at Dong’s UK site, Gunfleet Sands 3.

The turbines destined for Gunfleet Sands 3 will have 120m rotors. A 120m version of the 6MW turbine has been in operation onshore in Denmark since May 2011, at the Høvsore test site.