Earlier this week, the turbine was upgraded from 7MW as Vestas insisted a prototype would be ready by 2014. However, it released no news on its search to find a development partner for the turbine.

Talks are ongoing with Mitsubishi Heavy Industries over a possible deal, which would see the Japanese company take a 20% share in Vestas. 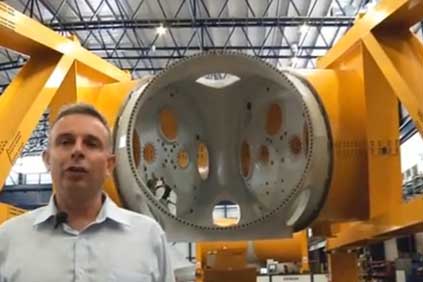 The promotional video features interviews with personnel at its Aarhus and Isle of Wight R&D facilities in Denmark and the UK respectively. It is the first view of components for the turbine such as the V164 blade mould, which is the biggest in existence.

Vestas' development of the V164 has been a difficult one. In addition to the prototype postponement - taken in response to "market conditions" - the company also cancelled plans to build an assembly and manufacturing plant in Sheerness, south-east England.

Additionally, the need for the world's number one manufacturer to bring on a partner to build the V164 has surprised many observers. In contrast, Siemens launched its own 6MW turbine with a working prototype two weeks after Vestas CEO Ditlev Engel unveiled the V164.