Earlier this year Vestas announced it had installed 50GW. By the same token, wind turbine designer Aerodyn - a company with around 50 people - has around 31GW around the world. According to company founder Sonke Siegfriedsen this is one of the things he wants to highlight on the Aerodyn stand (where, incidentally, we were offered the choice of cocktails or coffee) we went for coffee.

On a more serious note, Siegfriedsen was able to update on the progress of the 6MW SCD turbine it is producing for Ming Yang. The components for the machine are complete and en route to China for the installation of the first prototype around Shanghai. It is likely to happen in March.

Following on from yesterday's discussion with Mita Teknik about retrofitting, Gamesa said they are also experiencing an uplift in demand. This not only covers their own sub-1MW machines but also those built by Vestas.

Like Repower, Siemens is not using the event to launch a new turbine platform. However, also like Repower, it is promoting new versions of its 3MW turbine that have been developed for low wind sites. Like Repower again, it has increased both the blade length and hub height. The decision to develop low wind products was revealed by Siemens CEO Felix Ferlemann at the EWEA event earlier this year. Other news/ products it was promoting included the 6MW turbine, which it said was due to be installed in UK waters in Q4 2013.

Speaking about the row between Hamburg and Husum, Siemens was pretty unequivocal in its support for a move to the former. Not surprising when it is based in that city. But the contact I spoke to said that Hamburg was already a major city in the wind sector anyway and that Husum was just too awkward logistically and lacking high level management. Still, in spite of the criticism, I would have to say the exhibition appears to be very busy in terms of footfall.

Spoke with AMSC vice president Tim Poor about the company's battle with Sinovel and its strategy for the future. In terms of Sinovel, Poor spoke strongly about AMSC's determination to ensure Sinovel was not using AMSC-protected technology. Specifically, it was prepared to go down the legal route of forcing Sinovel to allow it access to imported turbines.

He said: "We want to make sure developers are aware of the risks if they import turbines from Sinovel."

Poor also spoke at length about the 10MW Sea Titan wind turbine, which it has been developing for a number of years. In essence he said the design was complete and AMSC is in discussions with partners about producing a prototype.

On a slightly less serious note, Dong Energy have started handing out free hot dogs throughout the event. 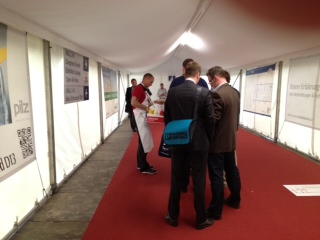 One of the main themes of day 1 was not the technology or the exhibitors but the exhibition. More specifically the ongoing spat with Hamburg over what is the right location to hold an event of this size. Tradition (Husum) over practicality (Hamburg). This well-run event has been held here since 1989 and the early days of the wind industry, but the fact remains that it is over two hours drive from an airport and is mostly held in tents. The argument spilled over into much of the opening ceremony with the organiser and the state president all speaking at length in defence of Husum. Moreover this has spilled onto the exhibition floor as well, and there is no room on the fence. Some said it was important to have an exhibition that was different from everything else, while others said it was inevitable it would move to Hamburg.

In terms of real news. Both Areva and Repower spoke about new product launches. The latter about new editions to its 3M turbine range and the shift towards higher hub heights in low wind locations. While Areva has acquired technology allowing it to make single blade installations offshore.

Goldwind chairman Wu Gang revealed some of the company's plans for the international market. Principally, that the US will come to its senses and restore some sort of incentive or backing for the wind industry. He is in it for the "long haul". While the company has little interest in setting up in Europe, despite reports that it was looking at building a factory in Portugal.

Also put together a video interview with control systems specialist Mita Teknik who said the company is getting increased orders to retrofit old 90s turbines.