The turbine's history dates back to August 2002 when Enercon installed a 4.5MW E-112 direct drive prototype in Egeln near Magdeburg - two years ahead of its German (5MW) super-class competitors. The E-112 was upgraded to 6MW in 2005 and ten 4.5/6MW turbines were installed in total. As of last month, 34 E-126 units are operational.

The development of the E-126's has been an evolutionary one. Unchanged features include the 12-metre generator diameter. While the drive system still comprises a stationary main pin and front-mounted generator and rotor assembly. 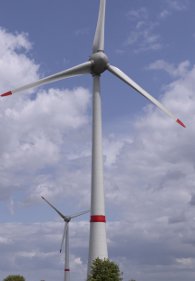 Each E-126 prefab tower consists of thirty-five tapering concrete rings and one steel yaw bearing connector. The tower foot diameter measures 14.5 metres and narrows to 4.1m on top. The bottom rings are manufactured in 120-degree sections for transport-logistical reasons. Smaller diameter rings comprise 180-degree halves, and the upper rings a full circle. All elements are pre-tensioned with steel cables passing through holes in the concrete tower wall.

Enercon turbines operate at 400V AC-voltage. This is converted into a DC-current inside the nacelle and fed down the tower into several cabinets with in-house manufactured 300kW inverters at the tower base’ first floor. Here the DC-power is converted again into grid compliant AC-power for feeding into the transformers.

A spiral staircase fitted alongside the inner tower wall is used for reaching the first floor, from where there is an elevator capable of transporting three-to-four people. In this turbine additional spiral staircases instead of traditional ladders have been fitted for covering the last 15–20 metres into the nacelle. For eliminating a DC-cable loop and the need for cables passing through the tower centre, Enercon developed an innovative solution comprising multiple parallel copper sliding contacts for individual cables running along the inner tower wall. Sliding brushes connected to the rectifiers  enable rotor yaw movements without disturbing the transport of power.

Nacelle entry inside the cast main carrier gives in front access to the hollow main pin, and one can easily crawl inside to the end and even actually feel the higher temperatures at the two bearing mounting surfaces.

Outside the carrier a platform provides access to twelve yaw motor drives, and a 12-metre slow turning open generator. The stator is electrically subdivided into four 90-degree generator sections and each section feeds power into a separate rectifier box, two on the left and two on the right hand side.

The nacelle rear section is rather empty, except a floor hatch for lifting material and for emergency escape by a special kind of cable lowering device.

With increased output, but depending upon ambient temperature and other variables, electric fans in the nacelle floor add to the cooling system's performance.

The second nacelle platform is reached by ladder, and final access to the nacelle top by another ladder. Standing outside at 142-metre height offers a magnificent view at the giant slow moving rotor blades with their distinct spoilers and the flat land surroundings.

It finally struck me again that you need to get up close to the E-126’s to appreciate its dimensions.