Siemens Wind Power has developed a new tower design that can be pre-manufactured and easily transported. The steel-shell prototype has been installed on a 2.3MW onshore turbine. The design focuses on hub heights above 100 metres, offering an alternative to state-of-the-art concrete and concrete-steel hybrid towers.

The polygonal tower is built of standardised smaller sections meaning the transport restrictions that apply to tubular steel towers could be eliminated. In theory the design allows for almost unrestricted tower heights, although the legal/practical tip height is regarded as 200 metres. Siemens is planning a 142.5-metre maximum hub height for the SWT-2.3-113, or a 199-metre tip height. For this configuration the tower base measures eight metres between the parallel sides. 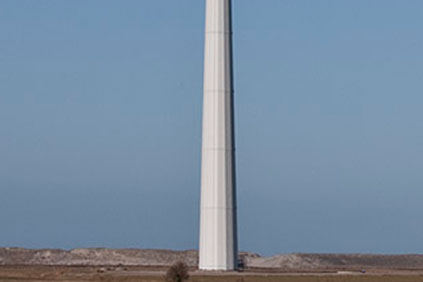 The prototype’s 90-metre hub height offers ample space inside for accommodating the transformer and additional equipment. The tower consists of 12 inward-facing, U-shaped sections of about one metre high at ground level. These sections are bolted onto the concrete foundation slab and connected vertically by friction force between adjoining flanges. Each added level has a narrower footprint and is assembled on the ground before being bolted to the previous level.

Moisture is prevented from seeping into the tower internals by a rubber lining pre-fitted all along the vertical contact areas and compressed during bolt tightening. Another distinct design feature is the access door, the frame of which has been reinforced on the inside by multiple thick steel layers, clamped together.

Siemens CTO Henrik Stiesdal said the design idea came from Danish supplier Ib Andresen Industri, which has previously manufactured smaller, welded-steel, shell-type towers for NEG Micon (now Vestas). "When Andresen approached us with this new concept based on advanced highly automated serial production, we considered it interesting and worth investigating.

"Our new standardised approach to technology would first have to answer several major questions. The key is ‘proof of concept’ verification testing, including finding out about required tolerances, the best assembly concept, and allocating a bolted-solution that eliminates the need for intermediate torque-check maintenance. We engaged a specialized lab in Scandinavia to verify all materials data and provide proof on the bolted solution long-term performance."

Regarding the bolted connections themselves, the design team opted for a clever solution proven from decades of bridge building experiences in especially the US and Asia. The system consists of a ‘closed’ outward-facing nut head that is pre-assembled into the pre-drilled sections, a screw with both left-hand and right-hand threads, a washer and a right-hand nut.

Stiesdal hailed three benefits of the system: the easy foolproof assembly process, the maintenance-free bolt-tension level, which remains sufficient throughout the 20-25 year design life, and the requirement for only one electric power tool during fitting and construction.

Another advantage is that during the fitting process only one electric power tool is required, and a combination with predetermined bolt sets provided during individual assembly stages enables speedy progress.

Looking back Stiesdal said that extensive comparative research into concrete, concrete-steel hybrid, and steel shell towers had indicated that cumulative investment and installation costs would be similar. The key shell tower advantages lie in a much easier transportation and handling, and the absence of real height limits and much reduced crane limitations.

He said: "The second steel shell tower prototype has been built in the Netherlands and the building of a first project with hub heights in excess of 100 metres hub height is ongoing."