That's it for today, the last industry day of EWEA, a day that saw discussions on high finance, key policy decisions and visions for progress.

10,000 visitors came and 400 presentations were made across four topics — research, policy, resource assessment, markets and integration, technology and finance.

At the climate and energy roadmap round table, Danish energy minister Martin Lidegaard asked the industry for its recommendations regarding the energy pricing system.

Grid infrastructure and stable pricing mechanisms were the most common concerns of the panel, which included senior personnel from Vestas, Siemens, Vattenfall and Dong Energy. Some key recommendations were to keep the current ETS system, not to forget the successes of the last 30 years for renewables and to move quickly.

Vattenfall CEO Øystein Løseth said the company plans for two thirds of its investment up to 2016 to be in renewables, mainly wind. It is looking at projects in the UK, Germany, Sweden and Denmark — but if the subsidy schemes disappear, the company will not invest.

RES Group CEO Ian Mays said despite the low cost of shale gas in the US, he could see the cost of wind globally matching that of gas before 2020. This is possible through improvements in storage and the increased quantity of direct drive cutting costs, and much cost-reduction potential in offshore. "There are many variables," he qualified, and stressed the need to improve the grid network, particularly for inclusion of offshore wind.

At a project finance session, the issue of regulatory stability and governments' sudden changes threatening the development of renewables cropped up again. Tom Murley of HgCapital said that "southern Europe is virtually becoming off-limits for a lot of people". Talking about support systems, he also said that as subsidies reduce and eventually disappear, the value of projects will be in the resource, not in the support tariffs. "That's why we are not really looking at Germany," he added.

Met Angelika Pullen communications director on consumer and business standard WindMade. A couple of big brand names could be joining soon although I can't mention who here. Looking at the US and Canada first, where the lack of targets means the public does not get to hear about growth in wind power or company involvement. Then it's Europe, with India and Mexico also on the map — the latter because of the strong company involvement in wind.

A product standard should be out next month. 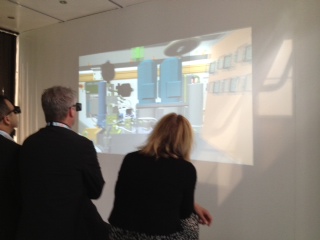 (See pic) Finally looked at the Vestas booth (it's 3D not virtual reality). Essentially it's a tour of a V112 turbine.

Stumbled across an Envision press conference while looking for somewhere to sit to do the last update and managed to hijack strategic business director Alex Sun on the way back to his stand. Speaking about the fact Envision is about the only Chinese manufacturer designing its own products, Sun went as far as to say there would be no future for the company if it took the Sinovel/Goldwind option of using another's design.

He also said that beyond China, Envision is targeting the European onshore market and has plans to push this forward over the next 12 months.

Minor panic when we got to the Envision stand, on the other side of the venue, when I realised I'd left a tripod in the press conference room.

Question for 11:20 — Where is Suzlon? According to a colleague the firm has been at EWEA in previous years but not now. According to someone close to Repower this is "probably" due to them concentrating on developing markets. Interestingly, Suzlon's Aarhus R&D facility has now passed onto Repower.

Vestas has had Chinese minister for technology Cao Jianlin over for a visit of the stand. No announcements but they did manage a quick visit to Vestas' virtual reality booth.

First meeting of the day was with Acciona Windpower global product line director Scott Baron and two of the companies senior product engineers. They spoke about the company's AW3000 turbine, whose 116-metre rotor is the largest for a class 2 machine.

Also talked about concrete towers versus hybrids as the company is building 120-metre towers. An interesting story about Brazil that is related to this is coming up.