Rebsdorf describes the new model not as a prototype but as a modular demonstration platform designed to demonstrate the validity of the concept. He added the installation could serve as a model for a larger turbine in the future. The test-programme focus will be on the two main product innovations — a rigid two-bladed upwind rotor and partial pitch control.

Two bearings and a stationary main pin, together representing a straightforward drive-system solution found in other turbine concepts as well, support the rotor. The rotor is connected to the generator by a lightweight carbon fibre torque shaft. The generator is positioned behind the tower — providing easy access for future rotor modifications or new generator installation — and has its own bearing support. 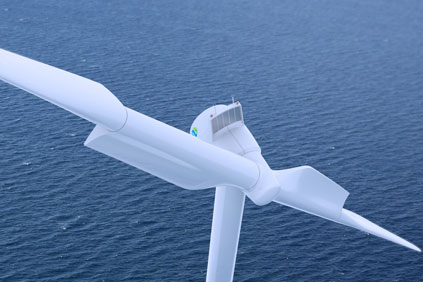 Two-bladed turbines have several advantages such as easier and more cost-effective marine transportation of complete rotor assemblies and a single-hoist installation, which saves time and cost. According to Rebsdorf, the transport and handling of segmented blades is also easier and cheaper than single-piece units of a similar length. "The blade chord stays within transport limits although the blade height is increased due to the size and position of the partial pitch bearing," he adds.

Rebsdorf claims partial pitch virtually eliminates the huge (asymmetric) design loads that would be introduced in a conventional two-bladed turbine in the event of a single-pitch system failure. This reduces blade, nacelle and tower mass and addresses the main concerns regarding two-bladed wind-turbine application.

Each 62-metre E128 blade consists of a 20-metre inner section with a fixed blade angle called an extender and a pitchable 42-metre outer blade (hence the term partial pitch). Both are manufactured by LM Wind Power out of glass-fibre-reinforced composite. The pitch bearings and the electric pitch control mechanism — located in between inner and outer blade part — are similar to those components applied on Envision’s 1.5MW volume products.

Rebsdorf explained that conventional three-blade offshore turbines in a common 25-30m/s cut-out range turn over their full length into a feathering position. Under similar high-wind conditions, the partial-pitch blades experience two different counteracting load-vector directions due to the extender and the feathered outer part. "This explains the huge reduction in extreme loads shown in our calculations and translates into a 10% saving in overall turbine costs, concentrated at mass reductions in the tower and foundation," he adds.

Any conductive metal in rotor blades is infamous for attracting lightning strikes, but Rebsdorf is confident the extra metal introduced in an outward blade position does not impose an extra lightning risk factor. "This is because relatively open two-bladed rotors by definition have to be protected all along the blade length," he adds. "Unlike three-bladed wind-turbine blades where lightning strikes usually concentrate at the tip sections."

One final interesting concept detail is the container that holds the power-electronic converter, switchgear and transformer, which is attached to the tower at an elevation of around ten metres above sea level. "Such a customised interface between turbine and in-field grid network is not new," concludes Rebsdorf. "But it enables a customised grid interface and easy exchange of components if necessary, and without a parallel need to introduce tower modifications."

The test turbine installation is planned for this summer at Denmark’s windy west coast, close to the Danish offshore-wind test centre in Høvsøre.