A storm is brewing over the conflicting interests of Germany's fishing industry and offshore wind farm developers. Large areas of the North and Baltic Seas may be excluded from fishing over the coming years as offshore wind stations and the connecting electricity transmission cables to shore are built.

"A huge area will be lost to fishing," said Christian Dahlke, head of legal matters at the federal shipping office, Bundesamt fur Seeschifffahrt und Hydrographie, which is responsible for permitting offshore wind stations. "Trawling can't be carried out within the offshore parks."

"We have to expect that conflicts will arise," warned Peter Breckling, head of the German fishing federation, Deutscher Fischerei Verband, at the same recent conference in Essen Dahlke was speaking at.

The available area for fishing will be steadily reduced as German pilot-phase offshore projects - each with up to 80 turbines - are built and then extended. In all, there are around 85 German offshore projects with a total 31GW on the cards, and about a third should be built by 2020.

Even now, the North and Baltic Seas are already regions with dense economic activity (see map). When offshore wind comes into play, the earnings of Germany's fishing fleet of nearly 400 vessels, ranging from a handful of deep-sea and big-beam trawlers to several hundred smaller trawlers and coastal cutters, may be affected. The industry accounts for a fish catch of around 200,000 tonnes a year and sales of roughly EUR200 million earned mainly in the North and Baltic Seas. Many foreign vessels trawling regularly in Germany's exclusive economic zone will also face the new no-go areas filled with rows of offshore turbines.

"From a German point of view, fishing is a non-subsidised use of the marine environment that is being pushed out by another use, which is only economically viable thanks to a massive government-imposed transfer of funds," complains Breckling.

Germany's Renewable Energy Sources Act stipulates premium payments for offshore wind-generated electricity that lie well above the average wholesale price of electricity. The extra cost is shouldered by electricity consumers through the renewable-energy levy. The levy has broad political acceptance - not least because offshore wind plays an important role in Germany's national renewable energy action plan to help the EU meet its target of sourcing 20% of final energy consumption from renewables by 2020.

Making matters worse for the fishermen, the German fishing sector has no legal protection. "Regrettably, the offshore wind station operator can be granted the exclusive right to use a maritime area, but the fishing industry has no comparable legal status that protects fishing areas from competing uses," says Breckling. Things are different in Denmark, he says. Although Danish fishing has no official legal protection either, there is a national consensus that, if a maritime area is used for offshore wind, gravel extraction or other purpose, the fishing industry receives compensation, he explains.

"Unfortunately there is no cumulative evaluation to establish the total area that will be lost due to all German offshore wind stations under development. Only the effect of each individual offshore project is examined," Breckling says. "But the upshot will be that fishing vessels will be crowded together into ever smaller areas." 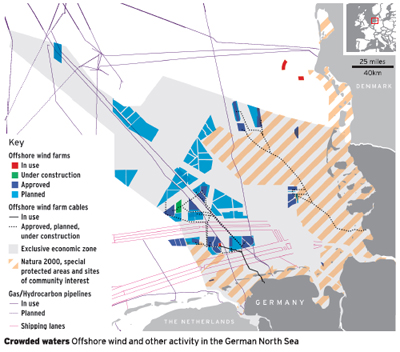 Breckling is calling for a forum to be created where offshore developers and the fishing sector discuss the issues now rather than waiting until conflicts erupt once offshore stations are built and German and foreign fishing vessels bunch closer to shore, or move into the traditional fishing grounds of neighbouring countries.

But the fishing federation is struggling to get its voice heard. Aside from submitting opinions for individual offshore wind permitting procedures, there have scarcely been any formal talks on the issues. The federation's demands include authorisation of passive (stationary) fishing within offshore wind farm boundaries, as already allowed in Danish waters. Even trawling should be possible under certain conditions, says Breckling. The federation also urges for a fund to be created from which to compensate the fishing industry for costs that include restructuring its fleet and converting to other catch methods.