Eize de Vries visited SWP’s Brande headquarters and spoke with chief technology officer Henrik Stiesdal about the turbine and the company’s plans to reduce the Cost of Energy.

SWP has looked to show that direct drive turbines can be competitive with their geared equivalents regarding weight. The entire turbine has only a 73-tonne nacelle mass, of which around 50T is the generator.

Elaborating on the SWT-2.3-113 design Stiesdal said: "Due to the larger rotor diameter we reduced rated rotor speed from 16RPM to 13RPM (-23%), but the generator torque level remains unchanged. The reduced power enables us to apply the same generator for both sister models, and with the larger rotor we get much more energy at low and medium wind sites." Besides Siemens also several competitors are launching new turbine model versions with large rotors for IEC II and IEC III wind sites.

So far, five SWT-3.0-101 turbines have been installed, including two prototypes in Denmark and Norway. One of the fifteen turbines currently being built is a "final" series model. This incorporate optimisations like a single turbine control cabinet instead of originally two, and a new in-board crane.

It is also possible to walk through the hollow generator for rotor hub access while the power converter and medium-voltage transformer are located in the tower foot. In some other concepts the converter and power converter are located into the nacelle. An alternative is to locate a rectifier into the nacelle, feed DC power down the tower, and locate the inverter part and transformer into the tower foot. The rectifier and inverter combined into one assembly is called converter.

The SWT-2.3-113 "Quantum Blade" is fitted with a new generation of in-house developed blades. Light and slender, they are like previous blade types built according to Siemens’ proprietary ‘IntegralBlade’ manufacturing process. As part of this process, the glassfibre reinforced epoxy blades are cast in one piece, eliminating leading edge and trailing edge glue joints as traditional weak points.

Stiesdal showed a graph indicating a consistent mass reduction trend achieved with all in-house developed rotor blades, which commenced in 1998 with the first 30-metre long B30 blade for a 1.3MW former Bonus turbine. Later developed rotor blade types - B40, B45 and B55 - fitted into a gradual consistent specific-mass reduction [kg/m] trend. However, the graph also contains a second substantially lower-level line, representing a so-called disruptive development step.

Stiesdal explained: "Our first new -generation B49 and B58 slender blades were developed for the 2.3MW and 3.6MW standard geared turbines. The single most important benefit of these load-reducing slender blades is that - despite significant growth in rotor swept area and therefore yields - potential the dynamic loads did not significantly increase.

"With the new SWT-2.3-113 ‘Quantum Blade’ for the direct drive platform, significant specific-mass gains have again been made without having to apply carbon fibres. We also expect to drive down the cost of wind power generation further in the coming next years through continued advances in aeroelastic modelling, optimised structural design and materials research." 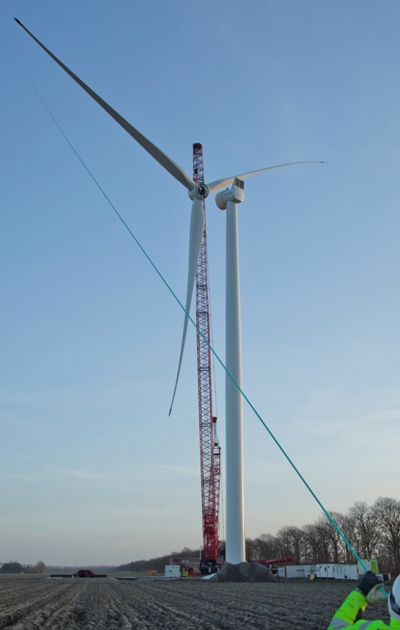