The 4.1-113 is a further development of ScanWind’s 3.5MW turbine model, of which thirteen operate over five years under high-wind and harsh environmental conditions along the Norwegian coast. On designing the product, GE took into consideration its offshore experience over the last seven years with the Arklow Bank wind farm in the Irish Sea, and its seven geared 3.6MW turbines.

Schellings said: "We came to the conclusion that a switch to direct drive can drive down the Cost of Energy by up to 8%. Offshore gearbox exchange can be complex too, while geared turbines require more O&M." He points out that each installed offshore GW requires 1.2 million litres gearbox oil during 20 years operation. This requires both additional downtime and heath and safety risks during the oil transportation and handling.

GE’s view is that an evolutionary, small-step, developmental approach can ensure reliability levels are retained and can be increased without taking any risks. Furthermore, several dedicated GE technologies with a focus on rotor blades, advanced controls, and grid integration were all integrated into the system as part of the scaling up process.

Schellings said: "For instance, several cooling system optimising steps enabled us to raise generator power-rating from 3.5MW to 4.1MW, and we also increased the rotor diameter from initially 90.6 metres to 113m. The GE-designed blades incorporate carbon fibres for the structural central spar. These combined measures have resulted into a 43% higher annual energy production at 10m/s average wind speed, and about 40% at 9m/s." Over 100km from shore in the middle of the North Sea average wind speeds in the 10 – 10.5 m/s range occur, while about 25 – 40 km from shore 9 – 9.5 m/s can be expected. 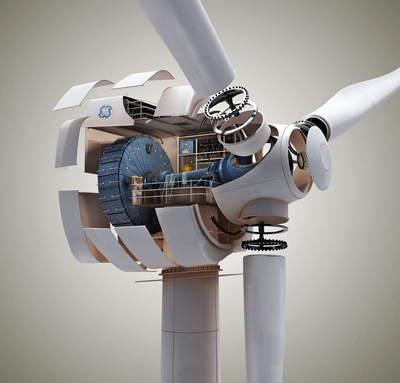 One key load reducing and product up scaling enabler is individual pitch control as large blades face substantial wind speed differences while moving from top to bottom position and vice versa. This is a proven technology whereby the rotor blade pitch-angle is continuously adjusted during each revolution.

The 4.1-113’s drive system layout comprises a generator located behind the tower, and connected to the rotor in front via a long hollow main shaft supported by two main bearings. Commenting upon drive technology choice Schellings explained that this layout ensures that only "pure" rotor torque and no unwanted loads caused by rotor bending moments can enter the generator: "This is a major reliability enhancing benefit, which functionally resembles the proven main shaft – gearbox drive solution applied in our 2.5MW series. GE in addition has decade-long experience with heavy-duty rotating power generating equipment like steam turbines based upon comparable design principles."

The Top Head Mass, nacelle plus rotor, amounts to 280 tonnes of which 84T for the generator alone. Two power converters and transformer are incorporated into the nacelle, which arrangement together with the preassembled hub enables turbine commissioning and all functional testing onshore.

"Our strategy is minimizing offshore activities due to the unfavourable weather window, plus the costs of installation equipment," he says. "We also tried to take advantage of lessons learned with over 15,000 installed 1.5MW series turbines. These are delivered to construction sites into three main modules and mostly installed by third parties. So on-site installation is therefore a matter of connecting the pieces together."

GE has taken this onshore installation method as a model for offshore turbine installation, sub-dividing turbines into two tower sections, nacelle plus hub, with the three blades fitted separately.

GE’s upkeep concept motto finally reads: "the unit should not trip!" But, as all wind turbines require regular upkeep service and occasionally do fail, redundancy is an accepted offshore strategy to minimize effects of such failures if they occur.

"We specifically wanted a spacious nacelle with easy service access to all main components and systems," Schellings concluded. "A key redundancy feature is that the generator is electrically split into two 50-50 sections, whereby each section feeds power to a separate power converter. In the event of either failure in one generator segment or a converter, the turbine can continue power generation at reduced output level."

GE plans to install a demonstrator prototype onshore during Q3-2011 in the harbour of Gothenburg, Sweden.