The Hydrogen Office houses a hydrogen production system that captures surplus energy from a 750KW wind turbine and stores it via a hydrogen fuel cell (see diagram below).

The turbine is expected to produce enough electricity for the facility and the Methil Docks business park. The system was developed by the Pure Energy Centre in Unst.

The facility forms part of an energy park in Fife, south east Scotland. It is intended to become a centre for innovation and development of renewable technology.

In August, the Crown Estate handed Dutch firm 2-B Energy an exclusivity agreement to develop a test site at the Methil wind farm. 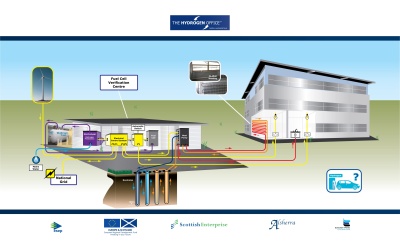