Founded in 1984, Enercon is probably best known as a pioneer of direct-drive turbines. Since launching it has produced around 17,000 of these with power ratings between 30kW to the 7.5MW E-126 turbine.

With the latter machine, Enercon can claim it has the largest turbine on the market. A decent boast at a time when manufacturers are increasingly working on ‘super turbines’.

Enercon followed a similar process with the E-126’s initial predecessor, the 4.5MW E-112 with 114-metre rotor diameter. It was first installed in 2002 and scaled up to 6MW three years later.

Despite having been on the market for a number of years, only 25 E-126 turbines and 10 E-112 units have been produced to date. However, there are more orders in the pipeline. According to an Enercon insider, the Dutch wind farm ‘Windpark Noordoostpolder’ will use 38 E-126 turbines while there are in total 150 to 200 E-126 units in various stages of permitting.

Enercon’s approach to new product development entails using proven technology developed for its predecessor. To this it adds only a few innovative features each time in order to ensure unimpeded reliability and enhanced product quality while limiting the overall development risk.

Enercon’s innovations include the continuously refined air-cooling system, with airflow now being focused at the air gap between generator stator and rotor part where the bulk of internal heat is generated.

Another development is the rotor blade that was introduced in 2003. Its defining design feature is an airfoil that extends to the rotating nacelle nose cone or spinner. This enhances airflow around the nacelle. Enercon says the design, combined with improved winglets at the blade tips, enhances energy yield by 12% to 15% compared to conventional rotor blades with a similar rotor swept area and comparable conditions.

Yet despite developing the largest operating turbine on the market, Enercon is one of a few large turbine suppliers that still offers modern turbines in the 800 – 900kW class, as well as a 330kW turbine.

For now, Enercon’s is focused on the development of the new 3MW E-82 and E-101 turbine models, each fitted with a liquid-cooled generator. Liquid cooling could make the generator overall system more complex, but as a key advantage greatly enhances heat dissipation capacity. 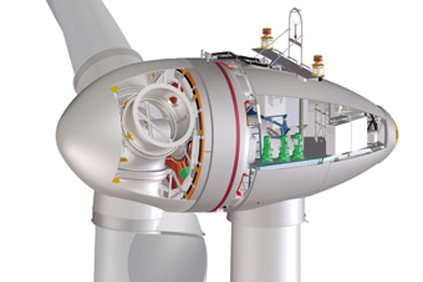 Over 100 of the initial 3MW E-82 models fitted with liquid-cooled generators were initially installed in mainly the Netherlands and Canada. They were recognisable by an external cooling radiator, but with the series model the radiators have been moved to a more visually pleasing internal positioning inside the nacelle.

The 3MW E-82 for high-wind IEC WC I sites has already entered serial production. Most likely, three E-101 prototypes are planned for early 2011. It has a 101-metre rotor featuring a 52% larger rotor swept compared to the 3MW E-82 sister product.  This new core product is destined for low and medium-speed IEC WC IIA wind sites.

Production of the new turbine is expected for 2011 in Magdeburg, Germany.  Enercon believes that from 2013 the 3MW class turbines would meet a major percentage of Europe’s new installations.