3Tier said a strong La Nina event in the Pacific Ocean, which builds up towards the end of 2010 and runs for around five months, will provoke the conditions.

According to the forecast, high wind speeds are most likely to hit the US in the first quarter of 2011. During this period, higher averages are expected in all regions barring California, southern Arizona, Nevada and areas near the Canadian border in Minnesota and Montana. 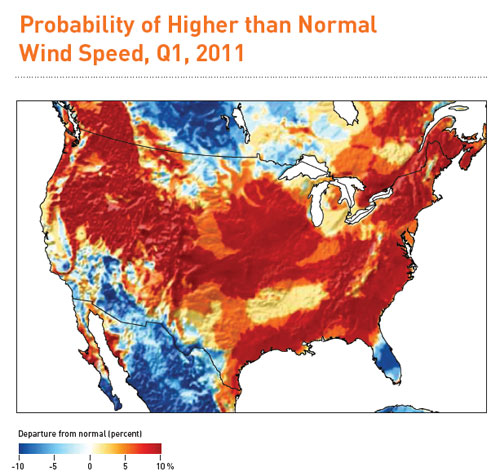 Although high winds are expected in the final quarter of 2010, they are less likely to hit western Texas and the upper Midwest.

Speaking about the forecast, 3Tier vice-president of advanced applications Pascal Storck said: "To create our prediction, we performed a historical analysis of La Nina impacts on weather across the U.S. for the past 40 years.

"Our data show that if the La Nina event persists, as is forecasted by the global climate modelling community, many of the wind projects across the country should have a very good first quarter.  This is a nice change from the first quarter of 2010 when many of the U.S. wind projects experienced below average wind speeds due to a strong El Nino effect."