Google and renewables investor Good Energies have each agreed to take a 37.5% stake in the project, dubbed ‘Atlantic Wind Connection’.

It is the latest renewables deal by the new media company. In May, Google made its first investment in the wind energy sector when it acquired a $38.8million stake in two North Dakota wind farms.

The Atlantic Wind Connection, which will have a 6GW capacity, will run from northern New Jersey to Norfolk, Virginia. It has been proposed by transmission developer Trans Elect. 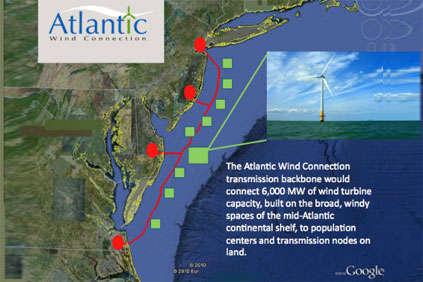 In addition to the benefit of connecting offshore wind projects along the coast, the line will also enable them to bypass congested parts of the northern states’ grid.

Trans Elect has said it aims to begin construction of the line in 2013. It added the first phase, running 150-miles from New Jersey to Delaware, could go into service by 2016.

Blogging about the decision to invest in the project, Google group business operations director Rick Needham said: "We believe in investing in projects that make good business sense and further the development of renewable energy. We’re willing to take calculated risks on early stage ideas and projects that can have dramatic impacts while offering attractive returns."

Both the US government and the states on the Atlantic are determined to develop to country’s offshore capability. It is estimated offshore could supply half the eastern states’ electricity needs.

Last week, the interior secretary Ken Salozar signed the offshore lease for the 468MW Cape Wind project off of Massachusetts.

At the signing ceremony, Salozar said a number of high-priority areas for US offshore development are set to be identified by the end of the year.