According to Norsetek co-founder Vidar Holmøy, these built-in advantages translate into substantial gains in cost effectiveness. It also means it is easier to transport the slender blades with an estimated 35% reduced mass.

Another claim is that the new technology enables the design of longer blades and lighter towers, which can decisively shift size-related limitations upwards. The rotor divides into sections, enabling easy handling and transport.

Common cantilever type rotor blades as a key characteristic are attached to the rotor hub at their blade root (only). Especially when these blades get longer both bending stresses near the blade root and deflection (backward bending caused by wind loads) increases.

One serious constraint is that under unfavourable circumstances the rather flexible blade tips can hit the tower. To avoid this suppliers/technology developers have been attempting to enhance blade stiffness characteristics by employing "thicker" airfoils near the blade root and/or to incorporate carbon fibres into highly stressed sections of the laminate. 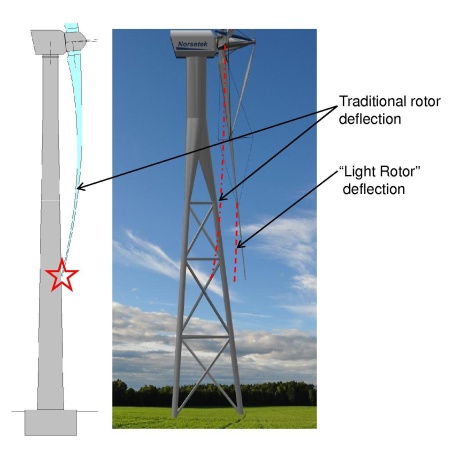 Other available options are to increase the distance between tower and blades by for instance an inclined main shaft positioning and/or by applying rotor blade pre-coning.

Norsetek chose for a different approach, which it has dubbed a 'braced rotor solution'. Key design characteristic is that each blade is structurally stiffened in the axial (wind thrust) direction and in the rotor plane itself.

Furthermore, tensioning cables interconnect individual blades, a design measure aimed at counteracting flapwise bending in the rotor plane. This is an infamous phenomenon caused by the "hanging" blade mass that changes direction twice during each rotor revolution.

Holmøy says: "The Light Rotor system can be configured with either three or four rotor blades, but the latter is our preferred configuration for both structural and slightly superior aerodynamic efficiency reasons.

"While a four-bladed version may not turn into our final solution, it has several advantages for us to consider. One is in augmenting power through reducing tip loss and a second advantage is that it inherently smoothens loading and output power characteristics through increasing blade-passing frequency. Simultaneously the rotor mass penalty is only about 10% compared to a three-blade solution of similar size."

An important Light Rotor design feature is that a blade pitching capability has been retained, by adding a so-called ring connector bearing where each blade support is connected to its matching rotor blade.

Finally, the worldwide patent protected Light Rotor technology has been developed initially for a 5MW base-line onshore wind turbine with 129-meter rotor size. The solution has been analysed by consultancy firm GL Garrad Hassan and compared with a conventional light and state-of-the-art reference rotor of similar size.

"The aerodynamic design is considered sound. However a key issue that still needs more consideration and verification is the aerodynamic behaviour and especially drag related issues linked to the application of blade supports and blade stays," Holmøy concludes.

At a glance — Offshore wind farms in the Baltic Sea, operational and planned to 2030

Baltic Insight report: Poland in pole position as offshore prepares to gear up

Now that Poland has awarded power deals to its first offshore wind projects, read our in-depth report on the Baltic Sea