The study, OffshoreGrid, will consider the technical, economic, policy and regulatory aspects of connecting offshore generation in northern Europe, including 128GW of wind, wave and tidal power. A total of 324 offshore wind projects fall within the geographic sphere of this study, ranging in capacity from 5MW to 2000MW, with connection route distances between one and 434 kilometres. To connect such varied projects will require adaptable transmission technology solutions.

Electrical power transmission may use alternating current (AC) or direct current (DC). The advantage of AC cables is obvious when the requirement is to link an offshore wind farm generating an AC with an onshore network that is supplying AC. However, there are technical limitations to AC connections, as the longer the distance the power has to be carried, the less real power can be transferred. As wind farms move further out to sea, this will become an issue.

The alternative to AC is high-voltage DC (HVDC), which has advantages for an offshore grid. HVDC has no technical limitation on connection distances (see graph, page 18). Another advantage is that the power flow can be precisely controlled on individual links and HVDC can connect non-synchronous AC networks, for example between the UK, mainland Europe and Scandinavia.

VSC is the latest development in the field of HVDC technology. It is a more flexible solution for an offshore grid because it can have multiple AC-to-DC converters and effectively manage power flow reversals, when the direction of flow is changed from sending power to an onshore network to taking power from the onshore network to send somewhere else. If CSC was used the link would need to be shut down for a short period; if an offshore wind farm was connected to the HVDC system it would have to be shut down briefly during the power reversal. VSC allows the power flow to be reversed on a converter without any interruption to the offshore grid.

VSC technology has developed quickly since its introduction 10 years ago, but currently its power rating is lower than CSC for a number of reasons. Not least among these is the carrying capability of the devices that convert AC to DC and back again. At present the power handling capability of the largest commercially available VSC converter module is 1200MW at ±320kV. Senergy Econnect has had discussions with HVDC converter manufacturers to confirm whether higher-rated VSC converters could be manufactured within the timeframe considered in this study. As a result, based on currently available technology, we predict that the 1200MW at ±320kV systems will be the main commercial technology over the current decade, with 2000MW ±500kV HVDC VSC systems potentially available from 2020. This will allow areas with significant planned generation, such as the English North Sea and the German Bight, to accelerate connection to the grid.

A key development for HVDC VSC links will be the introduction of higher-voltage extruded DC cables. The current cross-linked polyethylene (XLPE) insulation used in extruded cables is available up to a voltage of 320kV; we predict this voltage will rise over the next ten years. Another important development will be the circuit breakers needed to disconnect any faulted sections of the DC offshore grid and allow the rest of the grid to operate without interruption. Manufacturers are developing HVDC circuit breakers and the first are expected within a year.

Offshore projects currently built or under construction are located relatively close to the shore and connected to the closest suitable substation to transmit the power to onshore transmission systems. The initial phase of the OffshoreGrid project was to produce a base case electrical and market model, where all of the projects in northern Europe are connected via radial links to the onshore transmission system, and the existing and planned interconnectors between countries are built as planned point-to-point connections.

However, due to the number of megawatts that need to be connected throughout Europe and the distance of some projects from their onshore connection points, it is also a key requirement of the study to investigate the concept of offshore hubs, where the output from a number of projects can be collected to be brought to shore. The advantage of a hub is that it reduces the number of cables required on a per megawatt basis to transmit power onshore; the cost of transmission per megawatt also reduces as the power transfer capability of the hub increases. 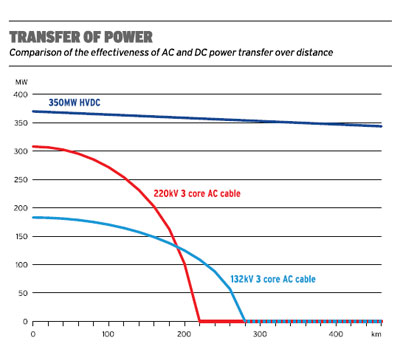 Senergy Econnect developed a grouping algorithm to assess the costs of connecting projects to an offshore hub compared to direct radial links to shore. It works by defining an offshore hub location and assessing if it is cost-effective to connect a project to that hub compared to using a direct radial connection to the onshore network. The decision to group projects into hubs is also dependent on the timing of the projects. The high capital cost of an offshore hub means it requires high usage once operational, so it is important to group projects into hubs based on when they will be ready.

The most cost-effective and technically suitable technology must be chosen for each hub design; this may be an HVDC hub with radial AC connections to offshore projects, a multi-terminal HVDC system or an AC hub with several AC radial connections to projects. The key finding from the hub design exercise is that coordination between developers will allow individual projects to have a lower cost grid connection requiring less equipment such as cables and HVDC converters, with the dual advantages of reducing costs and strain on the supply chain.

The key to finding the optimal offshore grid design is to understand from the market modelling the amount of energy transferred over the connections and the level of constraint, if applicable. The design then becomes an iterative process between the technical design, capital cost and the market impact, and it is this work that is now ongoing. The results, due later this year, will provide the European Commission with a set of blueprints and drivers that influence the development of a European offshore grid and its integration into European markets.

Peter McGarley is an electrical engineer for Senergy Econnect. Visit www.offshoregrid.eu for information on the OffshoreGrid project