In April, the government granted approval to Cape Wind, a Massachusetts offshore wind farm that is set to become the country's first. Interior Secretary Ken Salazar has declared that the 468MW project will "build a new clean energy future for our country". Expectations are that building will start within a year. But there remains a school of thought that America has barely tapped into its strong and cheaper onshore resources, and that major electricity transmission expansion to unlock it could be money better spent.

"It's a loaded question because it really depends on what angle you're looking at," says Matthew DaPrato, an analyst with IHS Emerging Energy Research. If one is only looking for the cheapest form of renewable energy, that would be onshore wind. It is, however, not necessarily the most viable in practice since building out the transmission is no easy task itself, he says. "Picture having to clear-cut 200 feet of tree all the way across New York state and Massachusetts to the city of Boston. You'll run into very heated opposition and will have to tackle that," he adds.

Still, one of the US wind industry's top goals is to make major transmission expansions in strategic places throughout the country to unlock vast resources of wind on land that does not have enough wires capacity to connect it to where power is needed. These are blustery places like West Texas and up through the Great Plains and into North and South Dakota, where a transmission expert once joked that if the wind stopped one day all the cows would fall over.

Even experts working in the offshore wind industry say maximising onshore resources should be a priority. "The focus for the US in the near to midterm must be onshore, including aggressive transmission capacity build-out where the resource is strong and abundant and the risk is (lower) and well understood," says Randall Tinkerman, manager of due diligence at Deutsche WindGuard Consulting GMBH. The German consulting firm is a technical manager for the Alpha Ventus offshore wind project, where six 5MW Multibrid turbines are operational.

Tinkerman points out that what is right for Europe is not necessarily right for the US. Market conditions are markedly different. For example, most of the good onshore wind sites in Europe have been used up already, which is far from the case in the US, he says. But with caution in mind, Tinkerman still believes the US wind market must take its first steps offshore. And the US should begin to develop its offshore supply chain now to avoid falling behind in the way it lost its technical lead on onshore wind to Europe. "This will only happen when certain prime projects are allowed to proceed," says Tinkerman. 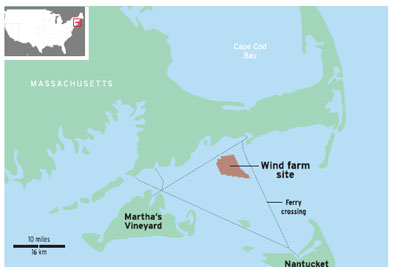 Higher cost
Onshore wind in the US costs utilities between $0.05-0.08/kWh, says DaPrato. These are prices charged by operators receiving federal incentives offsetting around 30% of the installed cost of their onshore wind projects.
In Europe, installation of offshore wind generation last year cost more than EUR4000/kW, about twice that of onshore. The higher cost of offshore turbines, their installation, cables and infrastructure is partially offset by higher energy yields from the stronger winds at sea. But still generating electricity offshore costs more than onshore because of higher capital and financing costs.

In the US, the Cape Wind project came to an agreement with utility National Grid to sell its power at $0.207/kWh, well above the onshore range because it factors in the higher costs of installing offshore wind. DaPrato says the offshore rate compares - if dollars are simply converted into euros - with rates seen in Europe. The average power purchase price for electricity from offshore projects in Europe late last year was EUR0.166/kWh ($0.209/kWh), according to research by Windpower Monthly.

But juxtaposing US and European power prices may not say much about the relative economics. "It's really difficult to make an apples-to-apples comparison," says DaPrato. "It's hard to single out a price point for offshore because there are so many variables and incentive schemes."

Higher returns notwithstanding, some observers doubt offshore wind will take off quickly in the US. "In our forecasts through 2025, we have offshore wind installing 8.1GW, which represents less than 5% of all new wind additions in the 2010-2025 period," Billhardt says. This is due in large part to the cost of energy from offshore, but also other factors such as longer permitting timelines and slower supply-chain maturity.

After all the dollars and cents have been counted up comes a less tangible but arguably more compelling rationale for launching offshore wind in the US: politics. To be sure, many experts say that even when the installation costs for onshore wind power generation and for the new transmission needed to get electricity to consumers is added, getting power from onshore wind is ultimately cheaper for the consumer than getting it offshore.

But that assumes the transmission is added in a timely manner. In reality, politics and economics have stymied grid expansion. Meantime, there has been political will in eastern seaboard states to pay a premium to build offshore wind to secure economic benefits through taxes, infrastructure spending and jobs.

Eastern seaboard state governors are particularly wary of spending billions upgrading transmission lines to transmit power from onshore wind. Last year, ten governors of East Coast states sent a letter to the US Congress voicing opposition to plans to improve the transmission system throughout the US and establish national corridors of transmission to move electricity from the Midwest to the East Coast, with costs allocated to all consumers who pay the utility for transmission through ratepayer bills. The utility, in turn, uses that guaranteed revenue to pay for the construction of transmission infrastructure.

"While we support the development of wind resources for the US wherever they exist, this ratepayer-funded revenue guarantee for land-based wind and other generation sources in the Midwest would have significant negative consequences for our region: it would hinder our efforts to meet regional renewable energy goals with regional resources and would establish financial conditions in our electricity markets that would impede development of the vast wind resources onshore and just off our shores for decades to come," wrote the governors.

"The eastern state governors have... unanimously answered that they would rather develop local resources even if the cost (to consumers) is a bit more than to buy wind from far away," says professor Willett Kempton of the University of Delaware. A top faculty member of the Marine Studies Department, Kempton has focused much of his research on offshore wind.

Political sway is a big driver of interest in offshore wind in the Great Lakes region of the US. Most of the states bordering the Great Lakes are so-called rust belt states, once the heart of American manufacturing. But these areas have seen drastic declines in manufacturing and local industry and politicians have seen wind power, both on and offshore, as an opportunity for industrial resurrection.
These states, such as Ohio, Wisconsin, Michigan, and the westernmost regions of Pennsylvania and New York, have awoken to the possibilities for wind off their lake shores, which in many cases may be more welcoming to offshore wind than the Northeast coasts.

"We don't have a problem with a vista, because about 40% of the Great Lakes shoreline is industrial. A guy who's in his office at a power plant and looks out on a wind farm doesn't think too much of it. So we don't have the same kind of not-in-my-backyard issues that exist with offshore in the ocean," says Sam Fairchild, chief executive officer of Energy Composites Corporation (ECC), referring to the contentious permitting battle seen with the Cape Wind project off Massachusetts.

Fairchild was previously the CEO of Tower Tech Holdings, which is now Broadwind Energy, a diversified US wind component and supply-chain company. ECC is moving ahead to open a factory in Wisconsin to produce blades, some of which will be used offshore in the Great Lakes.

For Fairchild, developing wind off the shores of the Great Lakes makes sense precisely because of the challenges in expanding transmission lines for cheaper onshore projects. "Everyone is concerned about how we make electricity in Iowa and ship it to Chicago. Or how we make it in the Panhandle of Texas and ship it into Dallas or St. Louis or wherever," he says.

"The transmission issue has been a barrier to a lot of these things because, as you have to ship electricity long distance, you have significant energy loss. So you may have to make 50% more electricity than you have to sell if it gets shipped a long way," he says.

With the Great Lakes, on the other hand, the distances are much shorter, he says. Between 18-19% of the demand for electricity in the US occurs within 40 kilometres of the shoreline of the Great Lakes.
For Michael Goggin, manager of transmission policy for the American Wind Energy Association, there is not a choice between wind on land or at sea. "Offshore and onshore wind are actually highly complementary, particularly since offshore wind tends to produce the most during the day while onshore wind typically tends to produce the most at night," he says.

"Given the urgency and severity of the energy security, economic, and climate-change challenges facing our country, and since wind works to address all these issues, the clear answer is that we should be developing both onshore and offshore wind," Goggin says.