Wind companies that failed to secure deals in Brazil's inaugural power agreements as prices were squeezed have jumped back in this year hoping for more lucrative deals.

The Brazilian government's renewable energy company, EPE, is to open another auction round in August to provide wind developers with long-term power contracts.

Last year, auction prices fell so low that some developers felt unable to accept them.

There are concerns that those that did acquiesce will be locked into cut-price deals that do not cover the risks associated with entering a fledgling market. This year, wind developers are expecting more bountiful deals.

Although the auction also invites biomass and small-scale hydroelectric bids, those from the wind industry dominate.

There are 479 projects totalling 14.5GW registered for the auction, of which 399 are wind projects comprising 10.7GW.

The new auction has a surprisingly large number of registered projects for wind as a result of the momentum created by last year's first-ever auction, Perrelli says.

That one, in December, clocked up 71 projects totalling 1.8GW of energy securing 20-year power supply agreements to deliver energy from July 2012.

Most of the successful wind projects that won bids are now preparing their sites for the arrival of the equipment. 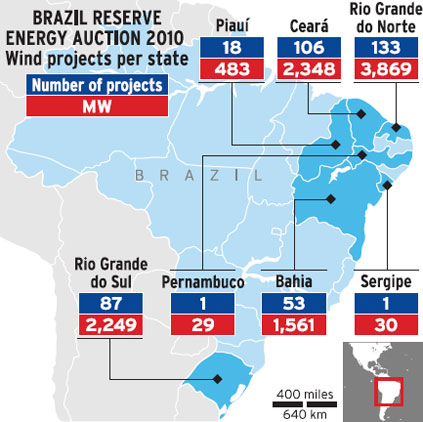 Perrelli says that the bulk of the wind projects registered for auction should meet EPE's stringent criteria, such as precise wind measurements, proof of financing and equipment contracts.

Most had already registered their projects in the last auction and have spent the last six months further honing their plans: acquiring more wind data, reviewing machine quality or finalising site layout. "They are now even better prepared to enter the auction," Perrelli says.

A trend for developers to work closely with banks, equipment providers, and even parties such as transmission line firms, will continue, he says.

"Nowadays all parties need to be open with each other to prepare their bids, otherwise they are out of the game," he says.

Developers are queuing up to participate. Local energy firm Servtec, which controls 155MW of wind plants in Brazil's north-east, has registered 350MW.

It failed to secure projects in the last auction, but is confident for this one. "Auctions are the one and only option to obtain PPAs in Brazil. Hence, we are focused on them," says Lauro Fiuza Neto, an engineer and board member at Servtec.

Siif Energies, also in the north-east, has registered 400MW of projects and is assessing different price and tactical scenarios, talking to suppliers and investors. "We are serious about the auction," says Siif director Marcelo Picchi, "but we won't make a crazy (low) bid."