AMSC Windtec is working on giant 10MW turbine. The SeaTitan offshore turbine's features will include a direct drive high temperature superconductor (HTS) generator and a 164-metre rotor. A number of manufacturers are working on 10MW turbines, what is different about Windtec is it plans to build a 10MW sister model, PrairieTitan, for onshore application.

The project was briefly touched upon by Windtec's Strategic Supply Chain Manager Christian Santner at a recent international power-engineering event in Amsterdam. He said a prototype is expected to be developed within the next few years, a formidable challenges to its design team. Santner is confident in the market potential of the SeaTitan: "Some clients really like to step into the offshore wind market with such big turbines."

The HTS generator application is new for the wind industry, but there are already some superconductor applications in different fields like for ship propulsion motors, power cables, MagLev high-speed trains, transformers and for defence purposes.

The use of high temperature superconductor technology rather than copper windings, enables the generators to be lighter, more compact and larger tolerances.

Windtec claims it will be one-third the weight and size of conventional copper-based technologies, translating into less than 500 tonnes ‘top head mass' (nacelle + rotor) for the 10MW size SeaTitan turbine. This is comparable to today's 5MW wind turbines.  Remarkably, US-based Clipper Windpower also claims a similar top head mass figure for its own 10MW Britannia turbine.  But, this is based on a geared drive system with multiple generators that do not incorporate HTS technology.

A second main potential benefit of HTS generators is the elimination of rare earth materials, dominantly Neodymium-Iron-Boron (NdFeB), which are increasingly applied for permanent magnets in wind turbine generators. However, there are many other applications too for these magnetic materials like in electric motors used in hybrid and full-electric vehicles.

There are large concerns about future availability of these precious materials, a situation that appears interlinked with China's current 95% market monopoly position.

One prominent Asian supplier that already successfully markets wind turbines based upon AMSC technology is Chinese manufacturer Sinovel. Sinovel in 2009 ranked third among the world's largest suppliers, an impressive performance achieved by erecting 2400 turbines of 1.5MW each, plus around a 100 larger 3MW units. Each of these wind turbines contain power electronics from AMSC.

Smaller Sinovel turbines are produced under a technology license agreement with Fuhrländer, and the 3MW unit under a co-development partnership with AMSC. "We offer our potential clients a choice between licenses and custom developments," said Santner explaining the difference between the two arrangements. 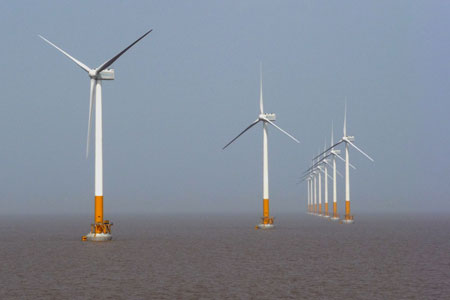 "New market entrants often prefer an initial license agreement to enable them to get to market quickly, and a co-development cooperation for a second turbine project after they have gained experience. Both options include a major technology transfer and a client's contracted use of AMSC power electronics optimised for the specific turbine portfolio.

"We're co-developing three conceptually different medium-speed 5MW+ wind turbines in co-developments with Hyundai of Korea, and Sinovel and Dongfang of China. The Sinovel prototype will be erected in late 2010."

Medium speed means the maximum generator speed range will be either roughly 150RPM or about 400 - 450RPM, compared to 1000 - 1800RPM for fast speed wind systems.

AMSC's current available portfolio of designs includes one 1.65MW model and two 2.0MW wind turbine models. The organization also has designed a 3MW model that is in high-volume production with a customer and is developing two additional 3.0MW turbine models. The 1.65MW, 2MW, and 3MW models all feature a typical AMSC-design geared drive system.

All three power-ratings can either be delivered with a double fed induction generator and partial converter, or a permanent magnet generator (PMG) combined with a ‘full' (100%) converter.

A 2.5MW model and three different 5MW+ class geared wind turbine models are also in the pipeline. AMSC also offers a (patent pending) power conversion alternative in the 2MW, 3MW and 5MW+ class dubbed SuperGEAR, which transfers the variable speed of the turbine rotor into a fixed generator speed. The technology enables a direct medium voltage grid connection (50Hz/60Hz) by simultaneously eliminating the otherwise required power converter and transformer. The technology focuses on offshore applications, aimed at offering turbines that are more stable, efficient and reliable.

It serves the global wind market with complete customised electrical and mechanical system packages for wind turbine self-manufacturing, and specialised services like training and supply chain support. The company's growing international clients list include two of the world's top 10 wind turbine players based on 2009 production figures.

AMSC's Austria-based AMSC Windtec subsidiary is responsible for all of the company's wind turbine designs, and its long history in developing and building complete wind turbines dates back to 1995. Initial product developments were a pitch-controlled gear-driven variable speed 600kW and 1.5MW turbines.

Between 2000 - 2003 AMSC products and additional intellectual property were owned by Pfleiderer of Germany, which in addition acquired a license for the 5MW Multibrid offshore wind turbine. The latter is a patented medium-speed or hybrid turbine development by German engineering consultancy aerodyn Energiesysteme.

In late 2003, Pfleiderer Wind Power stepped out of the wind business and sold its technology to two different German companies. Fuhrländer acquired the rights for the two AMSC turbine models, while German project developer Prokon Nord initially bought the 5MW Multibrid license and other rights.

AMSC finally acquired Windtec in January 2007 and the rapidly growing product development subsidiary today comprises a 170-person R&D department, including specialised groups dedicated to specific components like large bearings. AMSC's forecasted 2010 revenue will be over US$ 400 million, against about US$ 300 million in 2009.