ScanWind boasted a substantial track record stemming from the first 3.0MW prototype fitted with a Siemens permanent magnet type direct drive generator that was erected during 2003.

A second demonstration unit followed in 2004, this time a variable speed 3.0MW concept equipped with a multi-speed variation gearbox and fixed-speed generator.

The next two prototypes and a further eleven pre-series turbines were again fitted with a directly driven permanent magnet generator originating from Finnish supplier The Switch, this time with a 3.5MW power rating. 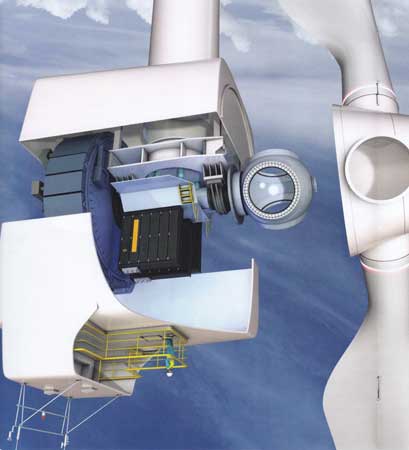 Years of accumulated operational experience were obtained with multiple turbines along the harsh Norwegian Hundhammerfjellet coastline. The area is characterised by silt air and winds averaging 9.7 m/s and temperatures ranging from -250C to +250C.

GE's 4.0-110 model is based upon this 3.5 MW turbine and has a 90-metre rotor diameter. It is again fitted with a The Switch generator with an unchanged drive system layout and features an enlarged 110 metre rotor comprising GE-designed rotor blades.

The drive system comprises a long rotating main shaft supported by two large bearings, with the upwind rotor located in front of the tower and the annular generator in opposite position behind it.

GE plans to erect an onshore prototype later this year, while Norway is the envisaged testing and demonstration site for the first 4MW wind turbines offshore. The turbine itself will be largely manufactured and assembled in the UK.

It is widely anticipated that the 4.0-110 will serve as a fast-entry and stepping stone for GE in the offshore wind market. Already substantially larger products are envisaged and in development for the future.