Take a look at ten of the biggest wind turbines available on the market today.

We focus on turbines in production or for which orders are being taken — omitting the discontinued, the test-bed prototypes for those that never made it, and the designs still on the drawing boards — to examine the credentials of the industry's largest models. 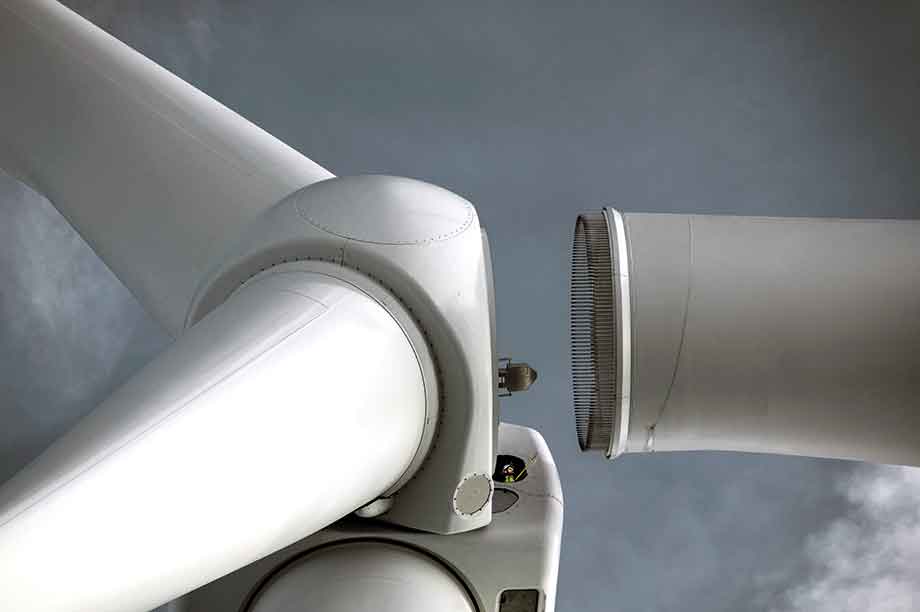 MHI Vestas continues to lead the way in turbine capacity that is commercially available.

The joint venture, now in its fifth year, has indicated the V164 platform, originally announced as a 7MW model in 2011, could still evolve further, while rivals examine completely new products.

New MHI Vestas CEO Phillippe Kavafyan said it could become the offshore industry "workhorse" and expressed a desire to keep the platform competitive for a few more years, banking on the industry wanting a proven design over a new, albeit larger model.

Its 8-8.8MW version of the turbine has been installed (or is set to be installed) at several UK, Dutch, Danish and German projects, with a combined total of 2.24GW.

MHI Vestas suffered a small setback when the 9.5MW test turbine in Denmark was destroyed in a fire in 2017, the cause of which was blamed on a faulty component damaged during installation.

The component was unique to the demonstration machine and did not affect the testing programme, and the model received certification in June 2018.

The V164-9.5MW has a pipeline of roughly 3.7GW. It was named as the preferred turbine for the 950MW Moray East and the 860MW Triton Knoll wind farms off the UK’s east coast. Both projects won support in 2017’s contracts for difference support auction.

It is also set for Belgium’s 224MW Northwester 2, the German 252MW Deutsche Bucht project and the 731.5MW Borssele III & IV site in the Netherlands, where two models will be installed on mono-suction-bucket foundations for the first time.

Beyond Europe, the manufacturer announced it had signed a preferred turbine supplier agreement for its V164 8-9.5MW platform for projects in Taiwan with Copenhagen Infrastructure Partners, which owns three sites off Changhua county in the west of the country. 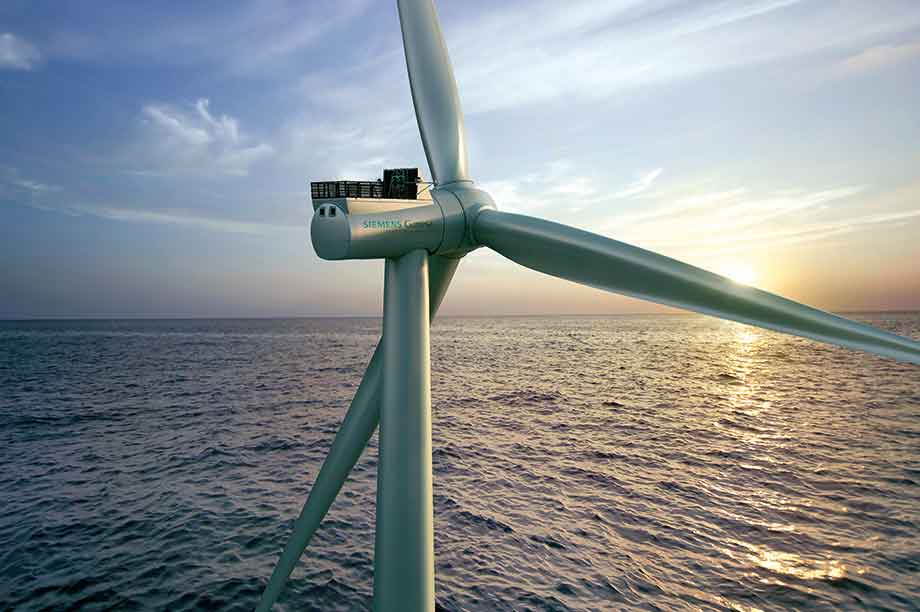 Siemens Gamesa’s machine is another big turbine that has benefited from regular and incremental evolutions since its initial launch in 2011 as a 6MW unit with a 120-metre rotor.

This SG 8.0-167 model was launched at the WindEurope conference in Amsterdam in November 2017.

While it has a nameplate capacity of 8MW, it can potentially be uprated to 9MW with a power-mode option.

The rotor is now 167-metres in diameter — the largest currently on the market — up from the previous 154-metre versions, providing a specific power rating of 365W/m2 assuming an 8MW capacity.

The latest evolution also profited from the merger of Siemens and Gamesa, the latter of which owned the now-defunct 8MW Adwen turbine, both in terms of technology and pipeline.

Its 6MW predecessors, with a 154- and 120-metre rotor, have been installed at Ørsted’s 210MW Westermost Rough (UK), 252MW Gode Wind 2 (Germany) and Equinors’s 402MW Dudgeon (UK) sites, among others, while the subsequent 7MW counts the 1.2GW Hornsea Project One and the 329MW eastern phase of the Walney Extension development in the UK in its track record.

Together, with the 3.6MW outrider, they made SGRE the leading offshore wind turbine manufacturer in the world.

In the ten months since its launch, the new 8MW platform has secured orders for almost 5.7GW of offshore-wind capacity, including the 1.5GW in France taken from Adwen, 900MW in Denmark and 1.4GW in the UK, as well as smaller orders in Germany, the Netherlands and Taiwan, meaning SGRE’s market leading position remains relatively safe.

Unlike rival MHI Vestas, Siemens Gamesa has made no secret it is planning a 10MW-plus turbine for the next generation, but GE Renewable Energy’s announcement of its 12MW machine earlier this year may have expedited matters. 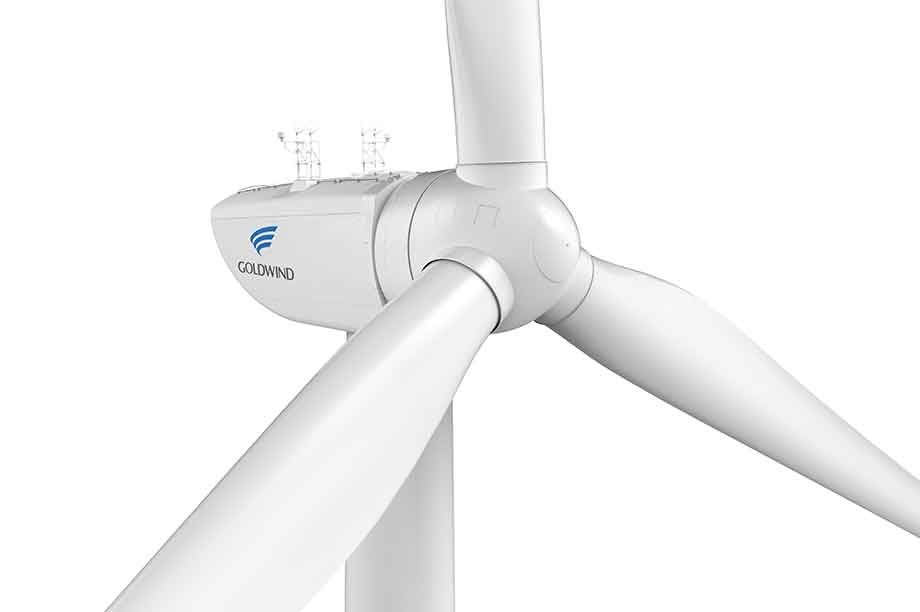 China’s leading turbine maker revealed more details of its new 6MW direct-drive offshore platform in November, although the company has been notably quiet on its progress since then.

Three variants have been announced: a 6.7MW turbine with a rotor diameter of 154 metres; and 6.45MW machines with rotor diameters of 164 and 171 metres.

The GW171/6.45 promises a longer rotor blade than is currently offered by either MHI Vestas or Siemens Gamesa.

But blade supplier LM Wind Power has the experience of building the 88.4-metre blades for the stillborn Adwen AD 8-180 turbine.

Production of the 75.1-metre blades for the 6.7MW model, the longest yet manufactured in China, began in September 2017.

The first priority is going to the GW154/6.7M, which is aimed primarily for operation in the high-wind areas off the coasts of eastern provinces Fujian and Guangdong.

The lower-rated, longer-bladed versions will be focused on sites with lower average wind speeds.

Goldwind says that Japan and South Korea are the main target markets beyond China, but Europe and India could also provide commercial opportunities in the future. 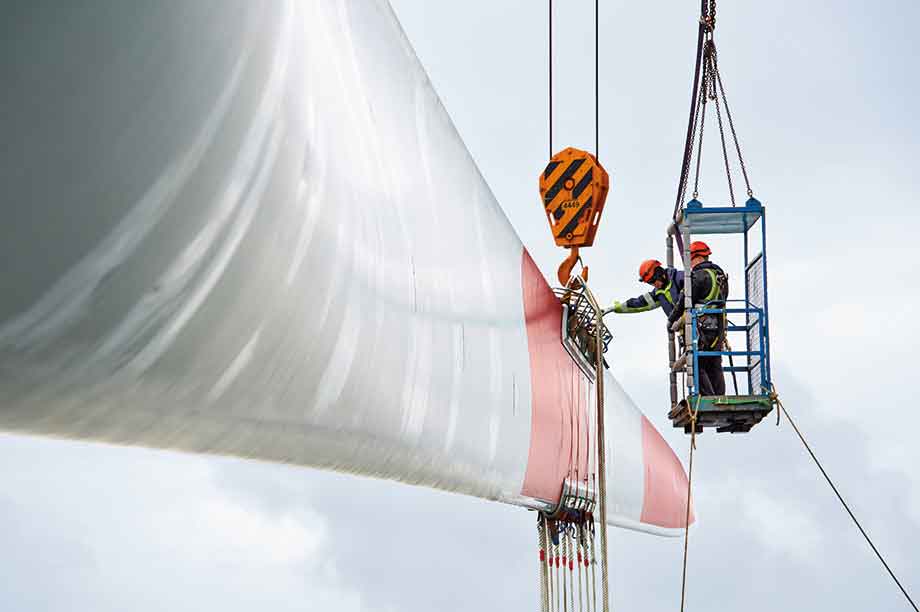 First seen back in 2004 as a 5MW machine with a rotor diameter of 126 metres and branded as Repower, this offshore turbine now appears to be approaching the end of its production life, despite nameplate capacity rising to 6.15MW and rotor diameter to 152 metres.

Senvion installed 72 units in 2017, 54 at Nordsee One and 18 at Nordergrunde, both in the German North Sea, although these had the smaller 126-metre rotor diameter.

The longer-bladed variant, for which Senvion claims a 20% increase in yield at wind speeds of 9.5m/s and a specific power rating of 339W/m2, are now being installed at the 203MW Trianel Borkum II project.

But there is nothing of note in the order book after that.

Attention is steadily turning towards Senvion’s plans to build a 10MW-plus turbine, essential if the company is going to be competitive against MHI Vestas, Siemens Gamesa and GE in the offshore sector.

A pan-European project to develop such a turbine was launched on 1 May 2018 with a €25 million grant from the European Commission.

The production lifetime and production output of this direct-drive offshore turbine looks likely to be short and small.

GE is already making plans to upgrade the manufacturing facility at St Nazaire in northern France to accommodate the company’s forthcoming 12MW machine, due to start serial production in 2021.

GE acquired the turbine when it bought Alstom’s power and grid business in 2015.

The 6MW Haliade machine had a healthy order book in French projects, but these have been continually delayed.

The turbine’s first commercial application was the 30MW Block Island project on the eastern seaboard of the US.

Outside France, the only large-scale order has been the 396MW Merkur project in Germany’s North Sea, now under construction.

The extent to which GE will follow the design principles of the 6MW with its 12MW machine — particularly the "pure torque" feature, which diverts load directly to the front frame rather than to the drivetrain — remains to be seen. 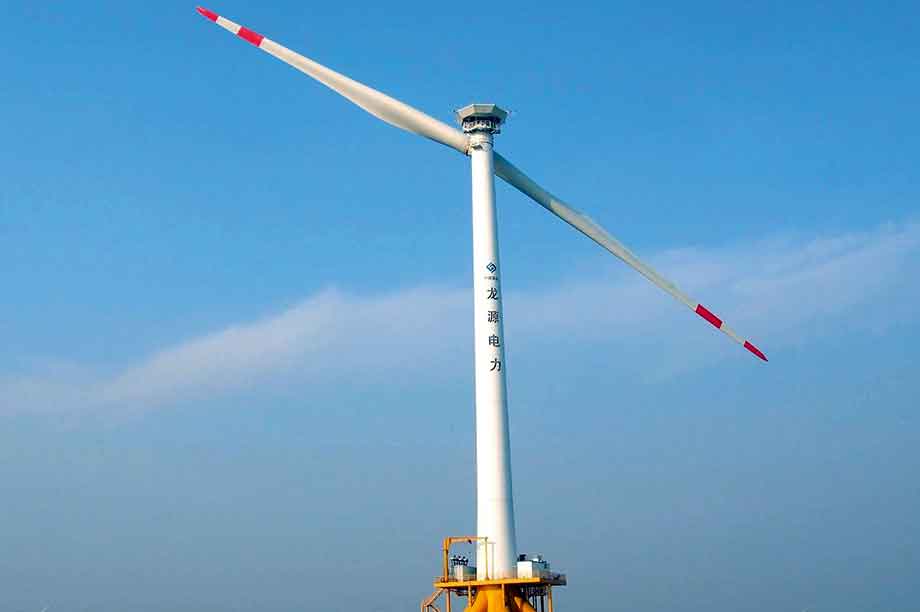 This radical two-blade downwind turbine — designed by German engineering consultancy Aerodyn — was expected to be the machine that would drive the Chinese offshore wind sector into the deep-water, far from shore sites where the wind speeds are highest.

But the Chinese offshore sector has shown no signs of rushing into these areas, understandably preferring to build up experience close to shore and with well-proven technology.

The result is that nearly a decade after Ming Yang acquired the licence to manufacture the turbine, it has yet to progress to serial production.

The first prototype was installed at the Longyuan Rudong intertidal site in China in 2014.

The turbine has been designed to withstand typhoons and features a helicopter landing platform semi-integrated with the nacelle structure. It has a rotor diameter of 140 metres and a specific power rating of 309W/m2. 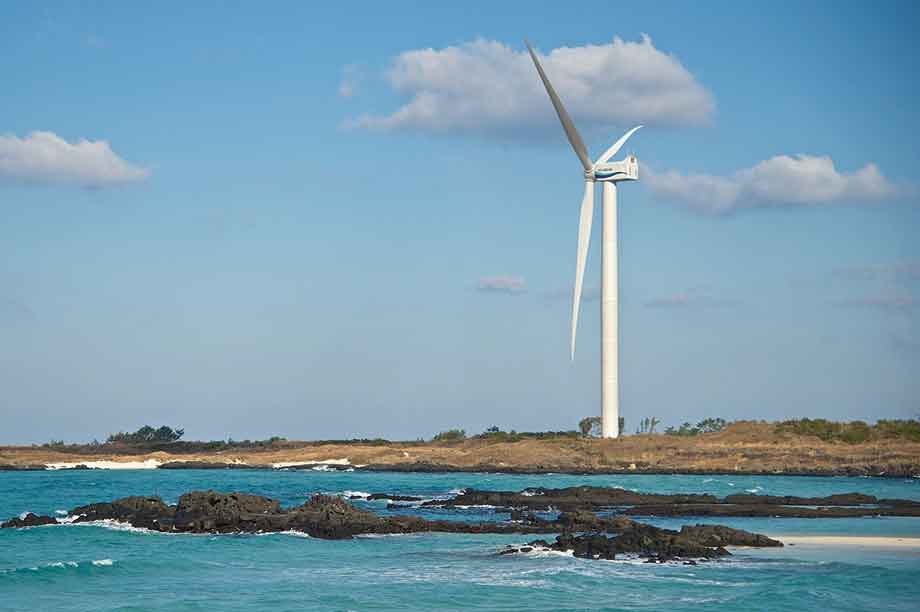 Korean firm Doosan acquired the rights to manufacture this 5.5MW offshore turbine in 2017, following in the footsteps of Dongfang and Hyundai Heavy Industries, which both signed licence agreements with its designer, US-based ASMC Windtec Solutions.

The turbine has been around for some time now. Dongfang installed the first prototype at an onshore site in China back in 2012, and the second at the Rudong intertidal wind farm in eastern China the following year.

Hyundai’s prototype was installed onshore on South Korea’s Jeju Island (above) in 2014.

However, neither company has pressed ahead with serial manufacture, and whether Doosan will make quicker progress remains to be seen.

AMSC offers a choice between a permanent magnet generator and a doubly fed induction generator. It is also the exclusive supplier of electrical control systems for the turbine.

The high-speed geared turbine has a rotor diameter of 140 metres, is aimed at high wind speed locations, and has a specific power rating of 357W/m2. 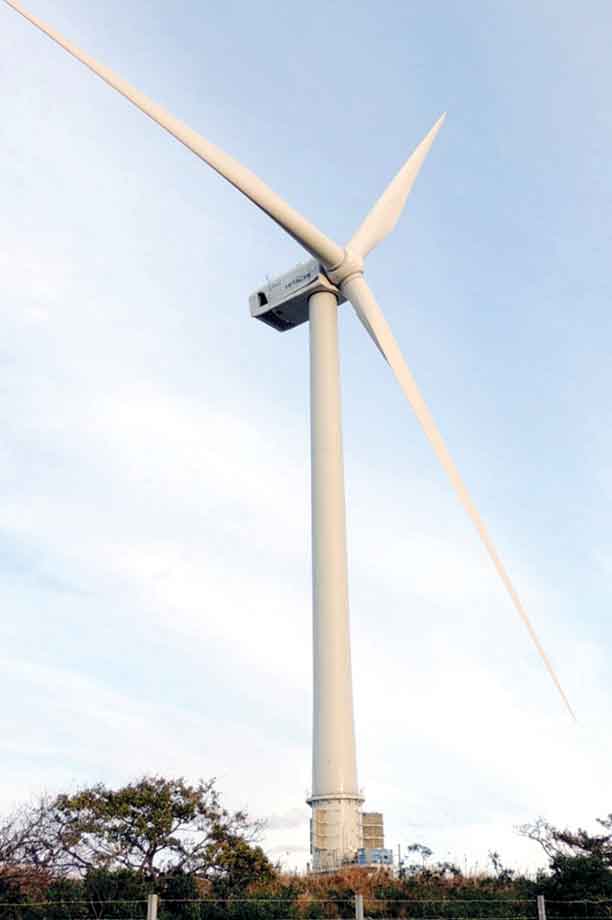 Both have evolved from an earlier 5MW machine with a rotor diameter of 126 metres.

Eighteen of each type have been specified for the Kashima Port North and South projects, on which work has yet to start.

Hitachi has focused on floating wind with the development of this turbine, although the Kashima Port projects are both very close to shore, in shallow waters, and the turbines there will probably be mounted on standard monopile foundations.

A key technical feature is the separate torque shaft linking the hub and gearbox. 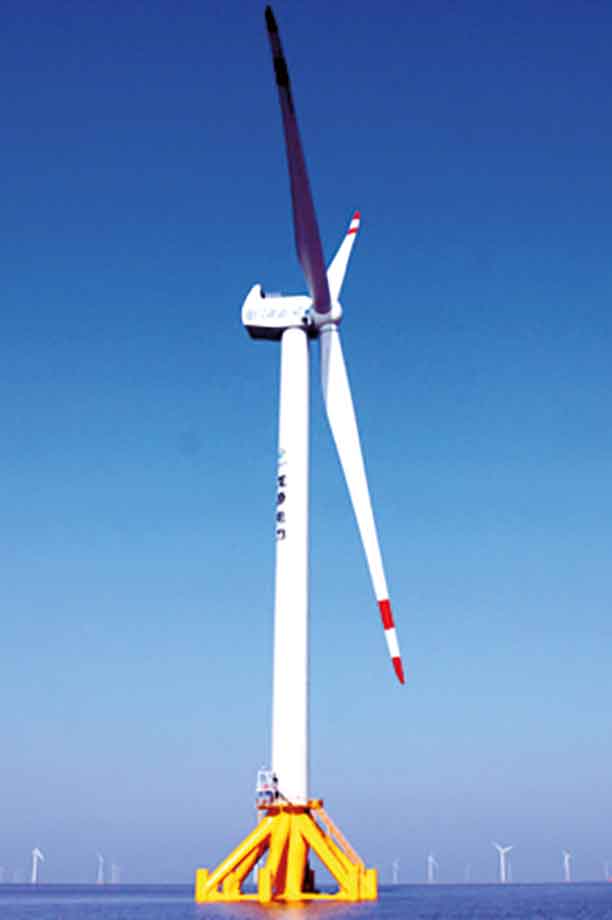 Unlikely to feature outside the Chinese market, at least 20 of these turbines are currently operating alongside 4MW Sewind turbines at the 300MW Huaneng Rudong offshore project, 14km from the shore of the eastern province of Jiangsu.

This became fully operational in October 2017.

It is a conventional three-blade, high-speed geared, upwind design, although boasting a very large rotor diameter — 151 metres — for a 5MW turbine, reflecting its focus on low- and medium-wind conditions.

The specific power rating is 279W/m2, which is extremely low for a large offshore wind turbine.

The 73-metre blades are made by LM Wind Power, but the gearbox is manufactured in-house.

The company is believed to have been working on a sister model, with a 127-metre rotor diameter and aimed at high-wind sites, but no details have yet been released. 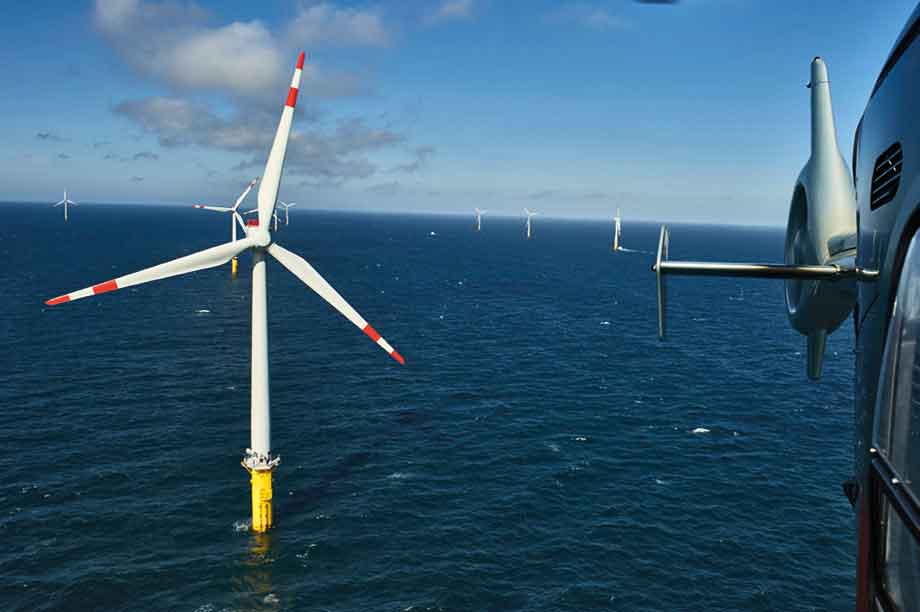 The Adwen AD 5-135 makes it to the foot of this list by the finest of margins, largely as a result of its recent deployment (October 2017) at Iberdrola's 350MW Wikinger project in Germany.

It should, of course, have been succeeded by an 8MW model, but the Siemens-Gamesa acquisition of Adwen resulted in that turbine not going beyond the prototype stage.

German engineering consultancy Aerodyn was responsible for the original design and its innovative hybrid drivetrain.

The first prototype was installed in 2004, and commercial deployment followed from 2007, when Areva took a controlling stake in Multibrid.

A little over 200 of these models, featuring a 116-metre rotor diameter, now operate in European waters.

Rebranded as Adwen, and extensively upgraded with a 135-metre rotor diameter, a further 70 units now operate at the Wikinger site in the Baltic Sea.